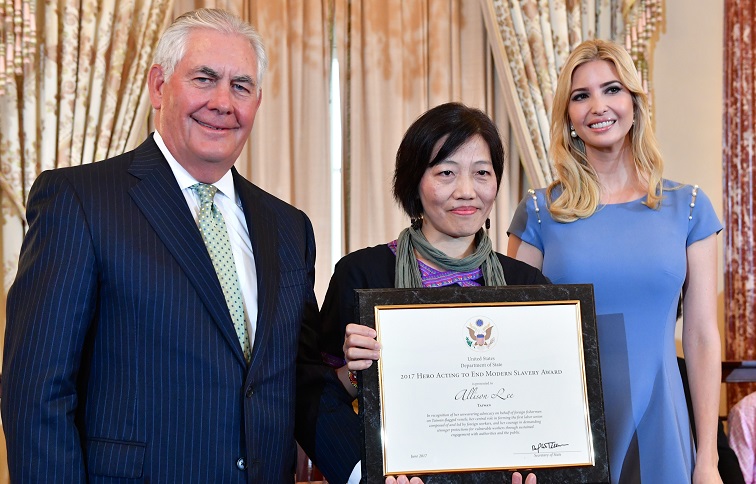 U.S. Secretary of State Rex Tillerson and Advisor to the President Ivanka Trump pose for a photo with 2017 TIP Hero Allison Lee of Taiwan, whose tireless efforts have made a lasting impact on the fight against modern slavery, at the 2017 Trafficking in Persons Report Launch Ceremony, at the U.S. Dep

AIT is honored to announce that Secretary of State Rex Tillerson has awarded Allison Lee, the Secretary General and founder of the Yilan Migrant Fishermen Union, the State Department’s 2017 “TIP Report Hero Acting to End Modern Slavery Award.”  The Award honors outstanding individuals around the world who fight for trafficking victims and against injustice.

Ms. Lee is one of many individuals in Taiwan who have devoted their lives to the fight against human trafficking.  She co-founded Taiwan’s first labor union composed of and led by foreign workers in 2013 and serves as a voice for these often unseen, unheard foreign fishing crewmembers working on Taiwan-flagged vessels.  She has documented hundreds of accounts of exploitation, abuse, and underpayment, and raised international and domestic awareness of exploitative working conditions.

Ms. Lee is a co-founder and the Secretary General of the Yilan Migrant Fishermen Union, Taiwan’s first labor union composed of and led by foreign workers, and is a leading voice in demanding stronger protections for fishing crewmembers and accountability for traffickers.  Ms. Lee spearheaded the establishment of the Yilan Migrant Fishermen Union after 16 years working in Taiwan NGOs focused on labor rights issues and four years handling labor disputes at the municipal level as an employee of Taipei Municipality’s Labor Affairs Bureau.

Since founding the union in 2013, Ms. Lee has advocated for the rights of foreign fishermen working on Taiwan-flagged vessels and documented hundreds of accounts of exploitation, abuse, and underpayment.  By serving as a voice for these often unseen, unheard foreign fishing crewmembers, Ms. Lee has raised international and domestic awareness of exploitative working conditions, including instances of forced labor.  In one case, she successfully pushed for reopening of an investigation into the death of an Indonesian fisherman on a Taiwan-flagged vessel.

Ms. Lee and her advocacy partners are driving change from the grassroots level through sustained pressure on officials and direct engagement with under-represented communities, including victims of human trafficking.  She continues to partner with local labor bureaus, fisheries associations, and law enforcement to seek justice and compensation for crewmembers who are exploited at the hands of their employers and brokers.

The U.S. Department of State leads the United States’ global engagement to combat human trafficking and supports the coordination of anti-trafficking efforts across the U.S. government.  Within the Department of State, and under the direction of the Ambassador-at-Large to Monitor and Combat Trafficking in Persons Susan Coppedge, the Office to Monitor and Combat Trafficking in Persons (TIP Office) partners with foreign governments, international organizations, civil society, and the private sector to develop and implement effective strategies for confronting modern slavery.  The TIP Office is responsible for bilateral and multilateral diplomacy, targeted foreign assistance, and public engagement on trafficking in persons.