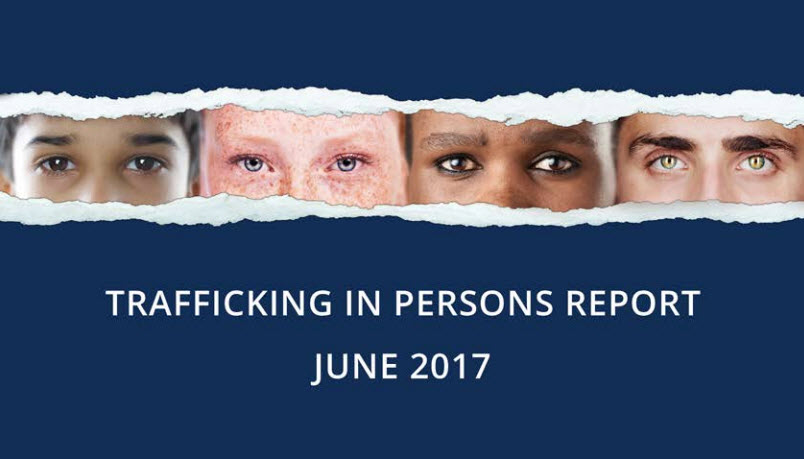 Increase efforts to prosecute and convict traffickers under the anti-trafficking law and sentence convicted traffickers to sufficiently stringent punishments; vigorously investigate and, where appropriate, prosecute the owners of Taiwan-owned or -flagged fishing vessels that allegedly commit abuse and labor trafficking onboard long haul fishing vessels; improve the effectiveness of anti-trafficking training and increase prosecutors’ and judges’ understanding of trafficking crimes; enact legislation that would address gaps in basic labor protections for household caregivers and domestic workers; increase efforts to reduce brokers’ exploitation of foreign workers by continuing to simplify the process of direct hiring and by strengthening broker evaluation and accountability systems; clearly define roles and responsibilities for the agencies that oversee Taiwan-flagged fishing vessels; establish a systematic information-sharing process to foster more robust interagency anti-trafficking coordination; enhance cross-border efforts to identify and protect victims, and prosecute offenders; and continue efforts to increase public awareness of all forms of trafficking.

Authorities maintained anti-trafficking law enforcement efforts. The Human Trafficking Prevention and Control Act (HTPCA) prohibits sex and labor trafficking and prescribes penalties of up to seven years imprisonment; these penalties are sufficiently stringent and commensurate with those prescribed for other serious crimes, such as rape. However, authorities continued to prosecute the majority of trafficking cases under other laws in the criminal code as well as the Children and Youth Sexual Transaction Prevention Act (CYSTPA) (amended as the Children and Youth Sexual Exploitation Prevention Act, which took effect in January 2017). Authorities conducted 40 labor trafficking and 94 sex trafficking investigations in 2016 (181 in 2015). Unlike in the previous year, authorities launched trafficking investigations of cases involving foreign fishermen, with four cases investigated involving 47 victims and 18 suspects. In total, the authorities initiated 128 prosecutions in 2016 (110 in 2015) and obtained 56 convictions (53 in 2015). Authorities initiated prosecutions against 44 suspects (30 in 2015) and convicted 28 traffickers (22 in 2015) under the HTPCA. Under other sections of the criminal code and CYSTPA, authorities initiated prosecutions against 84 suspects (80 in 2015) and convicted 28 traffickers (31 in 2015). Traffickers convicted under the HTPCA received lighter sentences than defendants convicted under the CYSTPA and other sections of the criminal code; sentences imposed on the majority of convicted traffickers (29 of 56) were less than one year imprisonment, which are inadequate to serve as an effective deterrent to the commission of trafficking crimes. Authorities continued to train law enforcement officers, prosecutors, and judges through various workshops, seminars, and conferences. Nonetheless, authorities and NGOs cited continued challenges in effective prosecution of labor trafficking cases due to court officials perceiving cases as labor disputes rather than trafficking crimes. Some police also reportedly perceived sex trafficking cases involving child victims as easier to prosecute than labor trafficking cases involving adult victims. Authorities initiated investigations of a prosecutor who allegedly engaged in commercial sex with a minor, as well as a city councilor who allegedly exploited foreign women in prostitution; both investigations were still ongoing at the end of the reporting period.

Authorities maintained efforts to protect victims of trafficking. Authorities identified 263 trafficking victims (140 exploited in sex trafficking and 123 in forced labor), of which 240 were referred to shelters for assistance. This is compared with 278 victims identified in 2015. Law enforcement officials used standardized questions and evaluation forms when interviewing and referring potential trafficking victims, including screening foreigners with immigration violations for indicators of trafficking. Current policies authorize only police and prosecutors to make official identifications, although NGOs and others have advocated for authorities to allow social workers and labor inspectors to identify victims. NGOs also reported instances in which judges overturned human trafficking charges brought by prosecutors; in these cases, foreign victims with valid work permits could remain in Taiwan to seek new employment and those with an unlawful status must depart Taiwan within a set time period. The National Immigration Agency (NIA) operated one shelter dedicated to foreign trafficking victims and continued construction of a second; in prior years, the NIA operated three shelters. The Ministry of Labor (MOL) subsidized an additional 25 shelters and a 24-hour hotline that trafficking victims could access; some NGOs recommended that MOL enhance its training of hotline personnel and implement more robust follow-up actions to identify trafficking victims and refer them to services. Shelters provided trafficking victims—both men and women—with medical and psychological services, legal counseling, vocational training, small stipends, interpretation, and repatriation assistance. Authorities encouraged victims to participate in investigations of their traffickers by allowing victims to testify outside the courtroom or through video equipment. In addition, authorities offered foreign victims temporary residence and work permits (granting 92 and 98, respectively, in 2016). Although victims who face retribution or hardship in their country of origin can also obtain permanent residence status, NGOs noted the lack of clarity on requirements for permanent residency status may have hindered the provision of this protection. Victims were able to obtain restitution through out-of-court settlement or file civil suits against traffickers; nonetheless, courts denied both of the restitution requests sought during the reporting period. Although victims could receive immunity for unlawful acts committed as a direct result of being subjected to human trafficking, NGOs reported authorities detained, fined, and jailed potential trafficking victims during the reporting period. These individuals include possible trafficking victims who, according to some reports, were coerced into participating in telecom scams targeting overseas victims.

Authorities increased efforts to prevent human trafficking. A cabinet-level minister-without-portfolio continued to implement the national plan of action and oversee an interagency working group. Various agencies continued to fund advertisements, public service announcements, and other materials on human trafficking and held trainings for vulnerable populations, such as youth, foreign workers, and fishing sector workers. Authorities continued to operate international airport service counters and foreign-worker service stations around Taiwan to assist foreign workers and educate them on their rights. To address exploitation associated with labor recruitment, the direct hiring service center allowed employers to hire foreign workers directly, instead of utilizing brokers who may charge excessive fees; however, most employers continued to deem it easier and more expedient to use brokers. Authorities fined six brokers and suspended business operations of four for charging excessive fees. During the reporting period, authorities removed a policy requiring foreign workers to leave Taiwan at least once every three years, alleviating financial burdens associated with reentering Taiwan. To protect foreign fishermen hired overseas, who are not protected by Taiwan’s Labor Standards Act, authorities enacted new laws that require a standard contract stating the workers’ salary, medical benefits, working conditions, and living arrangements; authorize businesses and not individuals to act as brokers; and establish a hotline for workers to file complaints or request assistance. However, some observers noted the shared responsibility between MOL and the Fisheries Agency for foreign fishermen impeded the streamlining of efforts to provide oversight to the industry and prevent trafficking. To prevent exploitation of domestic workers, MOL began to require first-time employers of foreign domestic workers to attend an orientation briefing on workers’ rights and relevant regulations. However, NGOs stressed the need for authorities to pass a long-stalled domestic worker protection bill that would mandate hours of rest, days off, and annual leave. Taiwan’s laws criminalize sexual exploitation of children by Taiwan passport holders traveling abroad, but authorities have not investigated or prosecuted any child sex tourism offenses committed abroad since 2006. Authorities made efforts to reduce the demand for commercial sex acts and forced labor and provided anti-trafficking training for diplomatic personnel.

As reported in the last five years, Taiwan is a destination for men and women subjected to forced labor and sex trafficking and, to a lesser extent, a source of men and women subjected to forced labor and of women and children subjected to sex trafficking. Of the 263 victims identified in 2016, 156 were foreign victims and 89 were children. Taiwan women and children are subjected to sex trafficking. Many child sex trafficking victims are from economically disadvantaged areas in Taiwan. Women from China and Southeast Asian countries are lured to Taiwan through fraudulent marriages and deceptive employment offers for purposes of sex trafficking. Many trafficking victims are migrant workers from Indonesia, the Philippines, Thailand, Vietnam, and to a lesser extent, individuals from China and Cambodia. Most of Taiwan’s more than 620,000 foreign workers are hired in their home countries through recruitment agencies and brokers, some of whom are from Taiwan, to perform low-skilled work as home caregivers and domestic workers, or in farming, manufacturing, construction, and fishing industries. Some foreign workers are charged exorbitantly high recruitment fees, resulting in substantial debts used by brokers or employers as tools of coercion to obtain or retain their labor. After recruitment fee repayments are garnished from their wages, many foreign workers in Taiwan earn significantly less than the minimum wage. Domestic workers and home caregivers are especially vulnerable to exploitation, since they often live in their employers’ residences, making it difficult to monitor their working and living conditions. Brokers in Taiwan sometimes assist employers in forcibly deporting “problematic” foreign employees should they complain, enabling the broker to fill the empty positions with new foreign workers and continually use debt bondage to control the work force. Documented and undocumented fishermen on Taiwan-flagged fishing vessels, mostly from China, Indonesia, the Philippines, and Vietnam, experience non- or under-payment of wages, long working hours, physical abuse, lack of food, and poor living conditions, which are indicators of trafficking. There have been reports of men and women from Taiwan engaged in illegal business operations overseas that present indicators of human trafficking, including in telecom scams targeting Chinese victims, as well as women from Taiwan being lured into forced prostitution in the United States.