The constitution provides for freedom of religious belief. The labor standards law does not cover domestic service workers and caretakers, who are therefore not legally guaranteed a weekly rest day. Due to this exclusion, many domestic workers continued to be unable to attend religious services. According to the Ministry of Labor (MOL), foreign caregivers and household workers whose employers denied them a weekly rest day to attend religious services could report their cases to the ministry. The MOL continued to coordinate with the Ministry of Health and Welfare to expand subsidized short-term respite care services for employers, thereby enabling more migrant caregivers to take leave to attend religious services or other conduct other activities without risking their jobs. Pusin Tali, Taiwan’s Ambassador-at-Large for Religious Freedom, stated Taiwan’s failure to safeguard migrant workers’ rights, including guaranteeing their ability to attend weekly religious services, might affect Taiwan’s relations with the migrant workers’ countries of origin. Taiwan authorities conducted outreach to the Muslim community – for example, by organizing an Islamic cultural exhibit in coordination with civil society groups and foreign missions of Muslim countries. 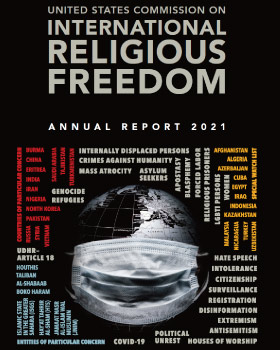 In April, the PRC-owned media outlet Wen Wei Po reported that PRC authorities temporarily blocked access to the Taiwan Presbyterian Church website for internet users in Hong Kong. Radio Free Asia (RFA) stated the interference was done in retaliation for the Church’s support of the 2019 prodemocracy movement in Hong Kong.

The U.S. government estimates the total population at 23.6 million (midyear 2021). According to a survey by the Academia Sinica’s Institute of Sociology released in 2019, 49.3 percent of the population exclusively practices traditional folk religions, 14 percent Buddhism, and 12.4 percent Taoism, with 13.2 percent identifying as nonbelievers. The rest of the population consists mainly of Protestants (5.5 percent), I-Kuan Tao (2.1 percent), Catholics (1.3 percent), and other religious groups, including Jews, Sunni Muslims, Tien Ti Chiao (Heaven Emperor Religion), Tien Te Chiao (Heaven Virtue Religion), Li-ism, Hsuan Yuan Chiao (Yellow Emperor Religion), Tian Li Chiao (Tenrikyo), Pre-cosmic Salvationism, Church of Scientology, the Baha’i Faith, Jehovah’s Witnesses, the Mahikari, The Church of Jesus Christ of Latter-day Saints, and the Family Federation for World Peace and Unification (Unification Church).
Some studies found that as many as 80 percent of religious practitioners combine multiple faith traditions. Many adherents consider themselves both Buddhist and Taoist, and many individuals also incorporate some aspects of traditional folk religions, such as shamanism, ancestor worship, and animism, into their belief in Buddhism, Taoism, Confucianism, or other religions. Some practitioners of Buddhism, Taoism, and other religions also practice Falun Gong, a self-described spiritual discipline. According to the Falun Gong Society of Taiwan, Falun Gong practitioners number in the hundreds of thousands.

The constitution provides for the free exercise and equal treatment under the law of all religions, which “shall not be restricted by law” except as necessary for reasons of protecting the freedoms of others, imminent danger, social order, or public welfare. Taiwan categorizes registered religious groups as foundations, temples, or “social groups.” Most churches are registered as religious foundations. A religious group may voluntarily establish a religious foundation by registering with the courts once it obtains a permit from the central or local authorities. The group must provide an organizational charter, a list of assets, and other administrative documents to register as a foundation. The Ministry of the Interior (MOI) requires that groups seeking to establish a Taiwan-wide religious foundation have real estate in at least seven administrative regions valued at 25 million new Taiwan dollars ($902,000) or more and possess at least five million new Taiwan dollars ($180,000) in cash. Alternatively, the group may receive a permit if it possesses cash in excess of 30 million new Taiwan dollars ($1.08 million). A group may apply instead for a permit to establish a local religious foundation from local authorities, who have lower requirements than the central authorities.

The 1929 Act of Supervising Temples provides that temples are under the management of a trustee monk or nun. The act states, however, “They cannot take charge as trustee monk/nun if they are not citizens of the Republic of China [Taiwan].” The act does not apply to temples that are administered by Taiwan authorities, local public organizations, or private persons. In 2004, the Council of Grand Justices declared several articles of the act unconstitutional for imposing undue restrictions on how religious groups transfer their assets.

Religious groups are eligible to operate private schools. Authorities do not permit compulsory religious instruction in any Ministry of Education-accredited public or private elementary, middle, or high schools. High schools accredited by the ministry may provide elective courses in religious studies provided such courses do not promote certain religious beliefs over others. The MOI and city- and county-level governments are responsible for accepting complaints from workers who believe the government or individuals have violated their rights and interests for religious reasons.
Male citizens born after January 1, 1994 are subject to four months of compulsory military service. The Enforcement Statute for Substitute Services provides for six months of alternative military service for conscientious objectors who oppose military service on the basis of their religious belief.

Because of its unique status, Taiwan is not a party to the International Covenant on Civil and Political Rights, but it enacted a domestic law in 2009 incorporating the text of the covenant.

The MOL continued its coordination with the Ministry of Health and Welfare that began in December 2020 to expand the eligibility of subsidized respite care services to Taiwanese families. Respite care provides short-term relief for primary caregivers, enabling more migrant caregivers to take leave to attend religious services or conduct other activities without risking their jobs. According to the MOL, employers utilized 84,000 respite-care days in 2020, and 96,000 in the first six months of 2021, an increase from the 24,000 utilized in 2019. Religious leaders, however, said there was still a lack of significant progress on the issue overall, and they continued to urge authorities to take more action, emphasizing the importance of employer support as well.

Ambassador Pusin stated Taiwan’s failure to safeguard migrant workers’ rights, including their ability to attend weekly religious services, might impact Taiwan’s relations with the migrants’ countries of origin. A representative of the Presbyterian Church said the Church continued encouraging employers to allow domestic workers to take a weekly rest day and that it promoted this issue once a year during a Sunday worship service close to International Workers’ Day in May. A representative of the Chinese Muslim Association said some employers of domestic workers either took on some responsibilities or had their own family members take care of some of the domestic workers’ responsibilities on weekends to enable domestic caregivers an opportunity to attend religious services.

In April, the Ministry of Foreign Affairs, the Chinese Muslim Association, and foreign missions of Muslim countries in Taipei jointly organized an Islamic Cultural Exhibition with the goal of providing a better understanding of Islamic culture and the Islamic community in Taiwan. At the opening ceremony, Vice Minister of Foreign Affairs Tsao Li-jey stated the authorities have worked to build a Muslim-friendly environment in Taiwan.

According to the MOL, there were no reports of complaints of religious discrimination from workers during the year.

In April, the PRC-owned media outlet Wen Wei Po reported that PRC authorities temporarily blocked access to the Taiwan Presbyterian Church website for internet users in Hong Kong. According to RFA and Church representatives, the website was also blocked in Taiwan and the Church’s database was hacked. RFA stated the interference was in retaliation for the Church’s support of the 2019 prodemocracy movement in Hong Kong.

Throughout the year, AIT representatives engaged with legislators and ministries, such as the MOI and cabinet members, as well as with Taiwan’s Ambassador-at-Large for Religious Freedom, on issues such as the rights of domestic workers and caregivers and the relationship between religious groups and the authorities.