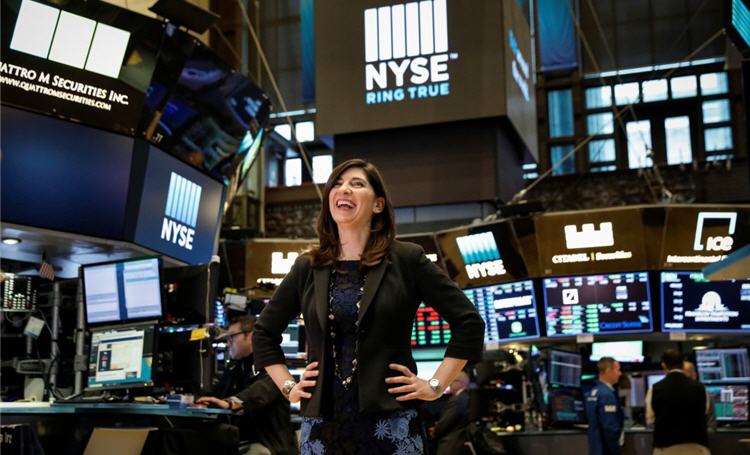 The New York Stock Exchange, the largest in the world, plays an important role in the U.S. financial system, but also reflects and influences global trends.

The exchange, in which securities are bought and sold, got its start in May 1792 when 24 of New York’s biggest stock brokers — all men — gathered under a tree in Manhattan to create the city’s first stock exchange.

Today, a woman heads the exchange. Stacey Cunningham started her Wall Street career in 1994, as an intern on the floor of the New York Stock Exchange. She worked her way up through its ranks to become chief operating officer, and is now the 67th president.

“Stacey represents a new generation of leadership for the NYSE Group,” said Jeff Sprecher, chairman of the New York Stock Exchange. “Stacey and our team are steadfastly committed to ensuring that the U.S. remains the center of the world’s capital markets.

With around 2,300 listed companies, the New York Stock Exchange in 2017 was worth more than $22 trillion, the most of all exchanges in the world. That figure is based on the total market value of stocks traded on the exchange, known as market capitalization.

An estimated 54 percent of Americans in 2017 said they invested in the market, either through individual stocks, mutual funds, pensions or retirement plans, according to research from polling firm Gallup.

One of a kind

Although the first U.S. stock exchange was in Philadelphia, the New York Stock Exchange quickly became the most prominent.

“Every city had banks at that time,” Asch said, “but New York very quickly grew to be the biggest banking center in the country. It became a place where, if you wanted to do a big project and you needed funding, we were the place to go.”

Today, the New York Stock Exchange is the only major stock exchange in the world that still has a physical trading floor. “That is really what makes us different, our market model,” Asch said. “NYSE is a community of the world’s greatest companies. They can come here to bring their ideas to the market.”

Since its start, activity on the New York Stock Exchange has been representative of market trends, providing a window into what drives the global economy. In its early years, the NYSE was focused on railroads and operating companies. During the 1900s, car manufacturers arrived on the scene, followed by airplanes, computers, and today, digital-technology companies. According to Asch, the next big innovation can always be found in the listings of the New York Stock Exchange.

This story was written by freelance writer Maeve Allsup.