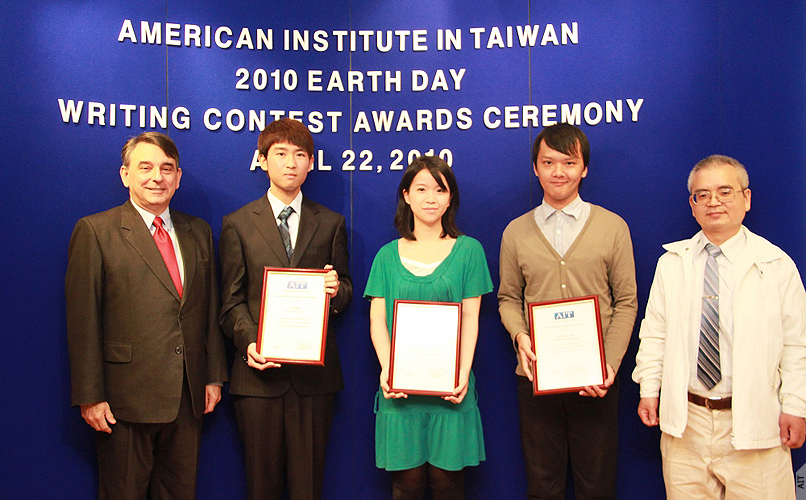 AIT received nearly 50 entries from across Taiwan in its first-ever Earth Day Writing Contest. Essayists ranged in age from junior high school to university students. The Writing Contest posed the topic: Innovative strategies to address the issue of climate change with particular attention to areas for U.S. – Taiwan cooperation.

The winning essays addressed a number of issues:

• Jerry Lan, a student at Wenzao Ursuline College of Languages in Kaohsiung, wrote about a three-step approach to addressing climate change, based on local, national, and international levels of responsibility. Mr. Lan encouraged NGOs from the United States and Taiwan to share ideas and best practices in order to promote the spread of environmentalism.

• Liu Chung-Kang, a student at National Taiwan University, suggested that the United States and Taiwan could leverage their scientific expertise to organize cooperative climate change and alternative energy research projects, and could also cooperate to form international rescue teams that would respond to disasters caused by the effects of climate change.

• Kelly Jhen, who lives in Taipei, focused on the potential for U.S.-Taiwan cooperation on solving the growing problem of waste materials from high-tech industries, which release greenhouse gases and contribute to climate change.

• Yu Man-Chen, a student at National Chengchi University, wrote that cross-border communication must be increased on topics such as weather forecasting and the development of clean energy and other green technologies. He urged the private sector and civil society groups in the United States and Taiwan to work together on these issues.

• Kang Yu, a student at National Taiwan University, wrote that the United States and Taiwan could lead the world by example, for instance, by working together to implement strong greenhouse gas reduction plans and promoting bilateral environmental education programs.

“These innovative ideas remind us that as new environmental problems emerge and existing problems change, we must constantly seek new ways to work together. Thankfully, with citizens and future leaders as intelligent and talented as the young people here today, I am confident the world will be in good hands,” said Director Stanton.