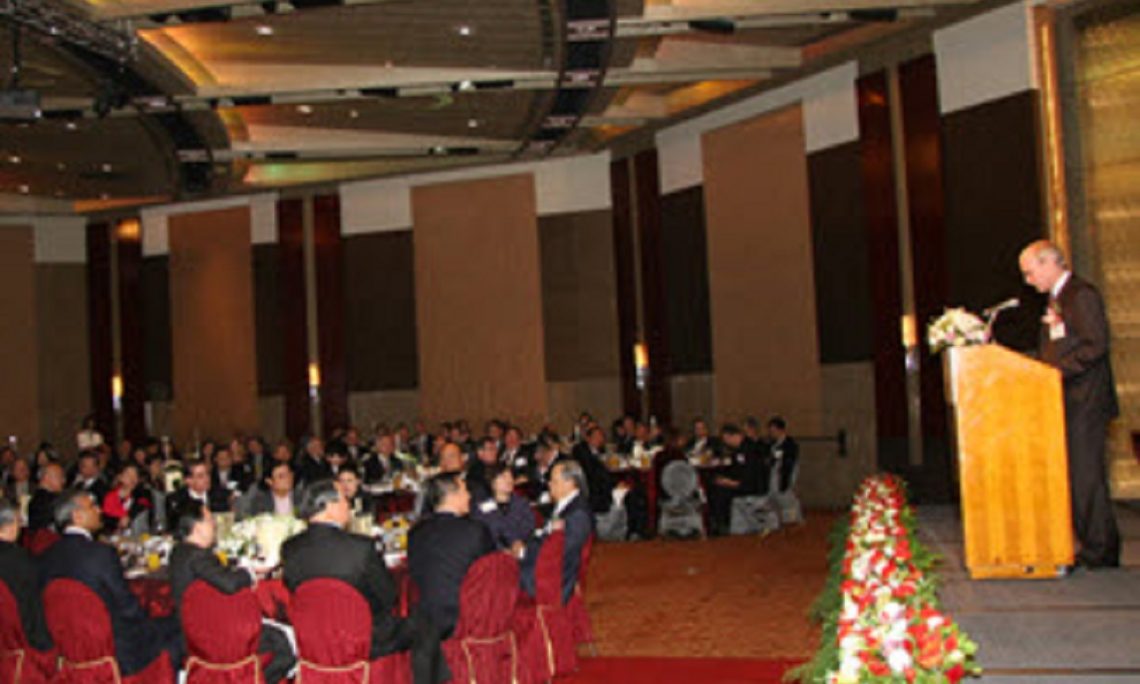 As an American, as many of you in the audience can understand, it both excites and terrifies me to have to speak about Abraham Lincoln because so much has been said about him, and yet there is an endless thirst and curiosity about the man who was our 16th president.

In fact I’d like to share with you a personal story that always connects me to Abraham Lincoln in Taiwan.

When I was a boy living in Kaohsiung in the 1960s, I was a stamp collector.  I used to go to a small store on the back streets of Kaohsiung that had a pretty good collection of stamps from around the world.  I discovered that there was one American stamp from 1943 that connected the Republic of China with the United States and Abraham Lincoln.

It was a blue stamp.  If any of you were stamp collectors you’d remember.  It cost five cents, when three cents would carry a letter, which means it was a rarer stamp.  It had the portrait of Abraham Lincoln on one side and the portrait of Sun Yat-sen on the other, and it commemorated the cooperation and the alliance between our two countries during the Second World War.

It also may have been the first and perhaps only stamp printed by the United States that had Chinese characters on it.  As I learned later when I learned characters, they had printed “Sanmin Zhuyi (三民主義 )” which of course is very similar to, as President Ma said, the concept “of the people, by the people and for the people,” which Abraham Lincoln celebrated in his Gettysburg Address.

So it’s a real honor for me to be here tonight and to be able to have this chance to speak to you about such a great man.

Of course I realize that I’m the only thing standing between you and dinner, which is an awkward position to be put in as a speaker, but I hope that our mutual admiration for Abraham Lincoln will gain a little tolerance on your part.

So what sort of man was the 16th president of the United States, and how well do we know him now, 200 years after his birth?

Abraham Lincoln was a melancholy man, as President Ma noted, who masked his sadness with humor.  He once said, “Were it not for my little jokes, I could not bear the burdens of this office,” when he was president of the United States.  As a circuit riding lawyer from the frontier of Illinois in the 1840s and ’50s, Abe Lincoln’s humor and story-telling made him an instant hit in each backwoods village he visited.

His cadence and rhythms were influenced by the King James Bible and the plays of Shakespeare, particularly his histories and his tragedies.  But his aphorisms often carried a kernel of folksy wisdom within.  For example, he once said, “It is better to remain silent and be thought a fool than to speak out and remove all doubt.”

One of my favorites was later sometimes cited as a quotation by Mark Twain, high praise indeed.  It goes something like this.  If you haven’t read Huckleberry Finn, it may puzzle you.  “I feel like the man who was tarred and feathered and ridden out of town on a rail.  To the man who asked how he liked it, he replied, ‘If it wasn’t for the honor for the thing, I’d rather walk.'”

Abe Lincoln specialized in self-deprecating humor, but it always seemed to sound genuine coming from him.  For example, he was known to quip at one point, “If I were two-faced, would I be wearing this one?”

Another time when he was addressing an audience at a railroad station he said, “I have stepped out upon this platform that I may see you, and that you may see me.  And in the arrangement, I have the best of the bargain.”

Yet Lincoln was also quite ambitious and agonized over his place in history, fearing he would live and die a man with no legacy at all.  As a young man in the 1830s he wrote, “Every man is said to have his peculiar ambition.  I have no other so great as that of being truly esteemed of my fellow men by rendering myself worthy of their esteem.  How far I shall succeed in gratifying this ambition is yet to be developed.”

The Chinese have an apt saying to the effect of the times make heroes – “Shishi zao yingxiong (時勢造英雄).”  This saying applies nowhere more succinctly than to Abraham Lincoln whose contested election as U.S. president in the fall of 1860 presaged the Civil War.  As has been eloquently captured by historian Doris Kearns Goodwin in her best selling account, Team of Rivals, a book that has clearly influenced fellow Illinoisan Barack Obama, Lincoln outlasted several more distinguished candidates for the Republican nomination, and once elected, promptly persuaded them to join his cabinet as the nation lurched toward war in the spring of 1861.  Most of these prominent Americans, none more so than his Secretary of State William Seward of New York, started out believing themselves more qualified to lead the nation than the humble Mr. Lincoln, but ended up acknowledging that he was the better man after serving under him through the crucible of Civil War.

So just where does Abraham Lincoln stand in the pantheon of great America leaders?  Was he our greatest president?  Well, I guess it depends on your criteria.  But allow me to share my ruminations on this subject.

As a student of history I am reminded that views change over time.  One of the quotes I love to think back on was when Zhou En-Lai was asked in the ’60s what he thought of the French Revolution.  He thought for a minute and looked back at his interlocutor, and said, “It’s too early to tell.”

Well, I don’t think it’s too early to ponder the question of who was the greatest American president, and I would contend there are four candidates most often suggested as our greatest leader:  George Washington, Thomas Jefferson, Lincoln, and Franklin Delano Roosevelt.

Thomas Jefferson was truly a great American, probably our most literary president, and immortalized for his eloquent penning of the Declaration of Independence.  But he is also widely viewed as leading the country into its first partisan struggles during the 1790s, and of course his hypocrisy about slavery, not uncommon in his time, has become more striking in the age of DNA analysis.

Franklin Roosevelt led the country through two great challenges three-quarters of a century ago — the Great Depression and the Second World War.  He gave his life to that effort.  So he must be counted as another great leader in times of turmoil and strife.  He too had his detractors, and one could ask the central question, would the nation have perished were it not for Mr. Roosevelt’s leadership?  I think not, and that must be weighed in the analysis of the question I have put forward here as to who was the greatest U.S. president.

My father, now 85 years old, and I have long argued the relative merits of George Washington and Abraham Lincoln in this respect.  George Washington, our first president, hero of Yorktown and the Constitutional Convention, was the father of our country and set important standards that have lasted down through the years to today.  However, I would contend that Washington’s greatest contributions occurred prior to his assuming the office of president.  Moreover, he enjoyed the company of a remarkable band of founding fathers, many of whom remain secular saints of American history down through our times.

No, I think I’ll stick with Abe Lincoln as our greatest president.  Here is why.  Lincoln, who served only four years in office when the others all served eight or more, took the job at a moment when the very survival of the union was placed in peril.  He showed uncommon wisdom in the way he united the various forces of secession and led them forward through difficult moments when the wrong policy could well have doomed us to two or more Americas.  A central example of this is his management of the slavery issue.

Lincoln was a lifetime opponent of what he called “the peculiar institution,” and here’s a quote from him.  “Whenever I hear anyone argue for the slave trade I feel a strong impulse to see it tried on him personally.”  Still, early in his presidency Lincoln recognized that, improperly handled, the slavery issue could drive the fragile union further asunder.  So he waited until after Gettysburg when it became clear how the contest in the field would end up before announcing his Emancipation Proclamation in early 1864.  It was shrewd and courageous steps like that in the course of pursuing our Civil War to its successful conclusion that lead me to conclude that Abraham Lincoln was indeed the United States’ greatest president ever.

Not only did he lead the United States — our nation, for those of you who share my citizenship — through its darkest hour, but his legacy included charting a clear path forward toward reconciliation with the vanquished South which, while compromised somewhat by the fell assassin’s bullet, has lasted down to today.

My favorite monument in Washington has long been the Lincoln Memorial on the west end of the Capitol Mall.  I try to visit that shrine every time I visit Washington.

As one approaches the steps you are greeted by a majestic statue of the sitting Lincoln gazing serenely back at the city he saved.  To your left, etched into the marble wall, are the immortal words of the Gettysburg Address which we will hear recited shortly after dinner.  But my favorite Lincoln oration is carved into the wall to your right as you face Lincoln.  I’d like to end my remarks tonight by reciting the last portion of Mr. Lincoln’s second inaugural address, delivered just weeks before his death, which encapsulates to me the man’s vision and legacy for our great country of the United States, for it set the terms of the reconciliation that was to come.

He said, “With malice toward none, with charity for all, with firmness in the right as God gives us to see the right, let us strive on to finish the work we are in, to bind up the nation’s wounds, to care for him who shall have borne the battle, and for his widow and his orphans, to do all which may achieve and cherish a just and lasting peace among ourselves and with all nations.”

Thank you very much.