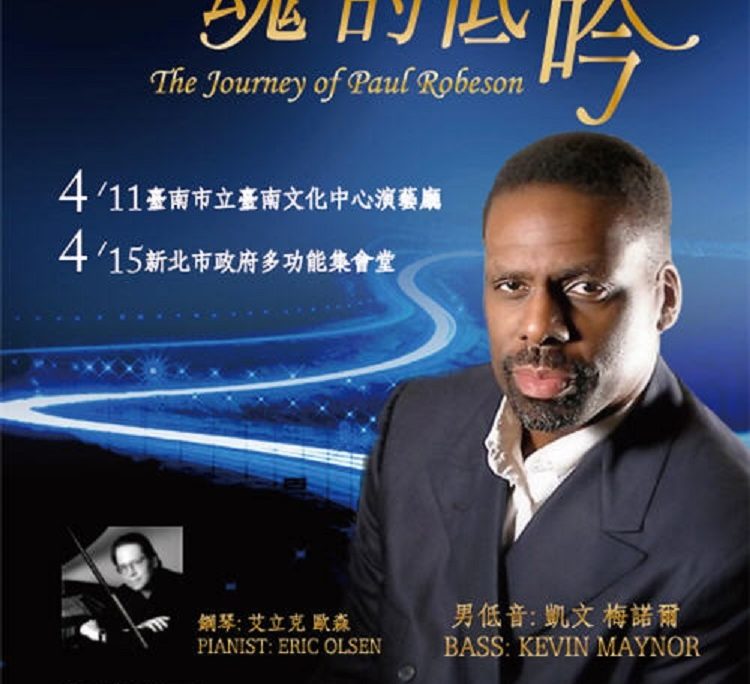 The American Institute in Taiwan Kaohsiung Branch Office is pleased to present an “Evening of American Music” at the E-Da World Royale Theater in Kaohsiung on Saturday, April 9, at 7:30 p.m. AIT is pleased to bring the superb American baritone Kevin Maynor and accomplished American pianist Eric Olsen to Kaohsiung to serve as soloists at the concert. The concert program will feature a wide array of music reflecting the spirit, diversity, and dynamism of the American people.As a prelude to the concert, AIT Kaohsiung branch will host a press conference and early dinner reception on Wednesday, April 6, at 4:00 p.m. at the Ching Fu Shipbuilding headquarters at No.1, Fusing 4th Road, Cianjhen District, Kaohsiung. During the press conference, Mr. Maynor and Mr. Olsen will offer a live preview of their concert performance.

The concert will be performed by the Kaohsiung Symphony Orchestra (KSO) under the baton of KSO Resident Conductor Yang Chih-chin. The Kaohsiung City Chamber Choir will accompany Mr. Maynor. In addition to featuring well-known compositions by great American composers such as Aaron Copland and Duke Ellington and a selection of traditional American spirituals, this “Evening of American Music” will include two signature pieces by George Gershwin, “I Got Rhythm Variations” and “Rhapsody in Blue.”

For the second time, Bank Sinopec has teamed up with the KSO to sponsor an “Evening of American Music,” with the Chimei Cultural Foundation joining the event this year as a new sponsor. Taiwan’s Public Television Service (PTS) will air a taped broadcast of the concert in the near future. Additional key concert partners this year include National Sun Yat-sen University and the Sun Yat-sen America Center, E-United Group and E-Da World, whose contributions have enabled all of the spectators to enjoy the event free of charge.

AIT Kaohsiung Branch Chief Chris Castro said, “It is my hope that this year’s ‘Evening of American Music’ will help to share with Taiwan the depth, breadth and beauty of American music; strengthen the cultural ties between the people of Taiwan and the United States; and provide an opportunity for the United States to thank the people of Kaohsiung and southern Taiwan for the great warmth and hospitality they have extended to AIT for more than three decades.”