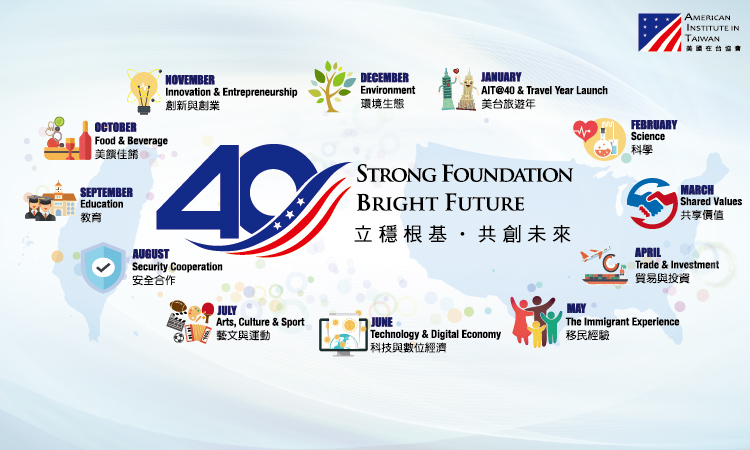 The launch of a yearlong campaign called AIT@40. This campaign will celebrate 40 years of friendship and partnership between the United States and Taiwan since the signing of the Taiwan Relations Act.

The American Institute in Taiwan (AIT), in coordination with the Ministry of Foreign Affairs (MOFA) and the Taipei Economic and Cultural Representative Office (TECRO), proudly announces the launch of a yearlong campaign called AIT@40.  This campaign will celebrate 40 years of friendship and partnership between the United States and Taiwan since the signing of the Taiwan Relations Act.

Each month, the AIT@40 campaign explores a different facet of the relationship, with monthly themes such as Trade & Investment, Shared Values, and Education.  Our campaign will not only recognize past accomplishments, but also look at ongoing and future efforts, as exemplified by our motto “Strong Foundation, Bright Future.” [立穩根基，共創未來]

The AIT@40 campaign kicks off the new year by exploring U.S.-Taiwan cooperation in the Sciences, headlined by the February 26 opening of the U.S.-Taiwan Space & Astronomy Exhibition at the Taipei Museum of Astronomy, in partnership with the Ministry of Science and Technology (MOST), National Space Organization (NSO), Taipei City Government, Academia Sinica, and Chung Shan Institute of Science and Technology.  Later this month, AIT welcomes Dr. Jenna Jambeck, a professor and environmental engineer who will participate in the Southern Taiwan Youth Ocean Forum and meet with environmental experts and stakeholders across Taiwan.  AIT will also organize a film screening for local high school students of the Academy Award-nominated film “Hidden Figures,” which tells the true story of brilliant, determined African-American women who overcame racial and gender barriers to make meaningful contributions to the success of the U.S. space program.

Other components of the AIT@40 Campaign during 2019 include: