Home 首頁 | News & Events | AIT/K hosted a film screening and workshop on “The Gay American Experience: Why Our Marriages Matter” 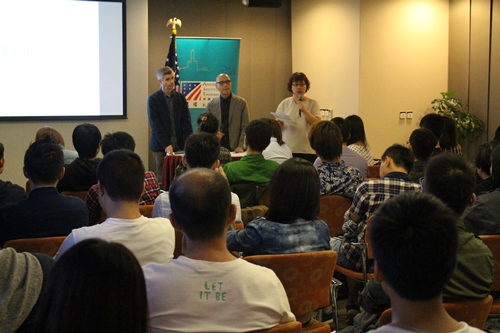 On October 21, AIT/K hosted a film screening and workshop on “The Gay American Experience: Why Our Marriages Matter” by two married American gay activists John Catania and Charles Ignacio.  In partnership with the Taiwan International Queer Film Festival, AIT/K screened seven selections from the U.S. documentary television series “In the Life” that ran from 1992-2008 for an audience of 70 people, incuding LGBT rights advocates, university students, academics and journalists.  The film screening was followed by an engaging discussion on the issues of the LGBT movement in the U.S. and obstacles in promoting LGBT rights. On October 22, the two LGBT activists conducted the same presentation to a group of 40 students and faculty members from the Graduate Institute of Gender Studies at Kaohsiung Medical University.