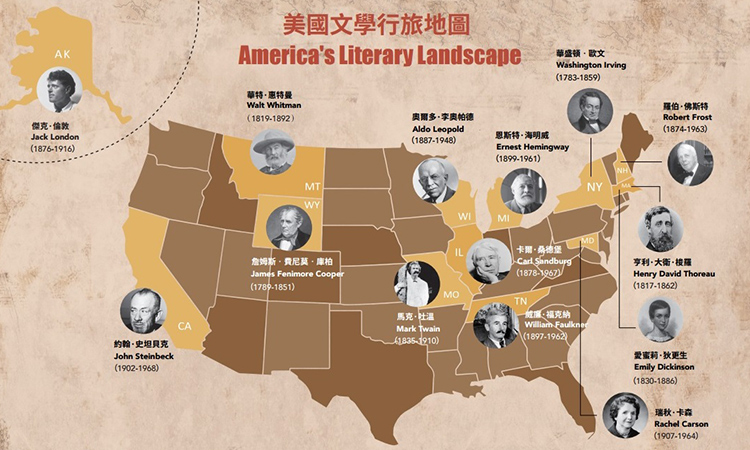 The American Institute in Taiwan (AIT) and the National Museum of Taiwan Literature (NMTL) are proud to announce the opening of “America’s Literary Landscape,” at the National Museum of Taiwan Literature on April 7, 2017. AIT Director Kin Moy, Tainan Mayor William Lai, and Deputy Culture Minister Ting Hsiao-ching jointly presided over the opening of the exhibit.

The exhibition combines words, photos, and interactive multimedia to showcase the influence that America’s unique landscapes had on 14 American writers, including Mark Twain, Ernest Hemmingway, and others. Over the course of the exhibition, visitors travel through American history and geography, moving from the 18th century wilderness of the American colonies as captured by James Fenimore Cooper to the 20th century wilds of Jack London’s Alaska. Visitors will also have the opportunity to experience an interactive 360 degree panorama of Yellowstone, one of the most beautiful places on earth, using the power of virtual reality technology.

In opening remarks at the exhibit, AIT Director Kin Moy said, “Some of the greatest stories of American literature are the stories of the writers themselves and the places that sparked their imaginations.” Following the exhibition’s opening, AIT Public Affairs Officer Joseph Bookbinder shared his hope that “by helping Taiwan audiences experience American literature in a new way, the exhibition will spark a greater interest in English language learning, and help U.S. and Taiwan societies draw closer together.”

In connection with the American literature exhibition, the NMTL concurrently opened a new exhibit titled “Dream of Green: Contemporary Taiwan Nature Writing” featuring Taiwan writers whose works related their love and care of the land.

“America’s Literary Landscape” will be on display at the NMTL through February 25, 2018, after which the exhibit will tour Taipei, Taichung, and Kaohsiung.

The National Museum of Taiwan Literature, located at 1, Chung-cheng Road, Tainan City, is open to the public Tuesday through Sunday from 9:00 a.m. to 6:00 p.m. For more information about the exhibition, please visit: https://event.culture.tw/NMTL/portal/Registration/C0103MAction?actId=70015