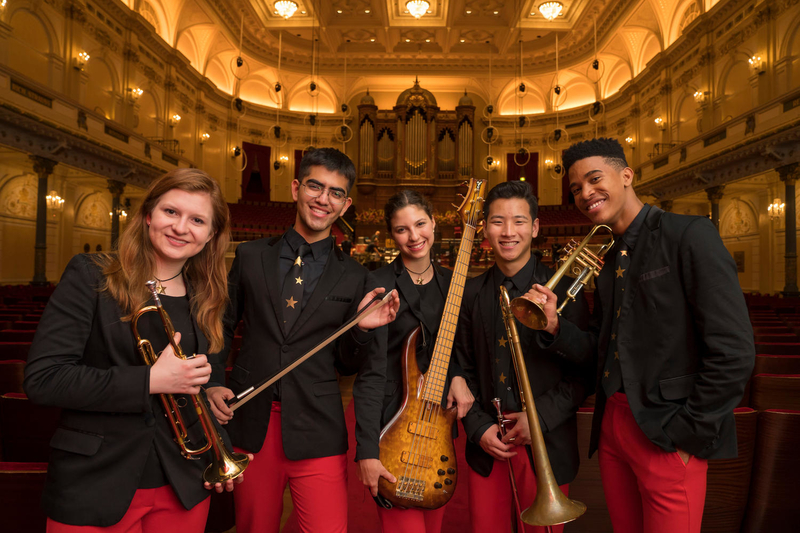 In honor of AIT@40 Arts, Culture and Sports Month, the American Institute in Taiwan is pleased to announce the Taiwan debut of Carnegie Hall’s national youth jazz orchestra—NYO Jazz—from July 29 to August 1.  This critically-acclaimed ensemble features 23 outstanding young American jazz musicians (ages 16-19) selected from across the United States who will participate in cultural exchange activities with youth in Taipei, Taoyuan, and Taichung and present two performances at the National Taichung Theater (July 30 & 31).  After Taiwan, the group will perform in Beijing, Shanghai, Zhuhai, and Hong Kong.

This program is a part of the American Institute in Taiwan’s (AIT) yearlong AIT@40 campaign, celebrating forty years of U.S.-Taiwan friendship and cooperation since the signing of the Taiwan Relations Act.  Each month of 2019 features a unique theme, highlighting the multifaceted nature of the U.S.-Taiwan relationship.

Acclaimed trumpeter Sean Jones will lead the group on its first-ever tour to Asia, joined by Grammy Award-winning jazz vocalist Kurt Elling, a special guest artist who will bring his signature baritone voice and unparalleled scatting prowess to Taiwan.  NYO Jazz will conduct three outreach programs from July 30-31, organized by AIT with support from local schools and organizations.  Some members of the group will perform on July 30 at the AIT SEASAT (Southeast Asia-South Asia-Taiwan) Youth Camp, held in partnership with the Taiwan Asia Exchange Foundation from July 29 to August 1.  Others will have a workshop with participants from the AIT@40 Youth Leadership Exchange Program “Fostering Youth Leadership through Music and Social Change” at Wuling High School on July 30.  On July 31, NYO Jazz bandleader Sean Jones will lead a lecture and demonstration on jazz and American culture at Taichung Second Senior High School.

Please see the following link for an NYO Jazz promotional video about their 2019 Asia Tour:

Members of the media are invited to cover the workshop at Wuling High School:

20 students and educators from Taiwan’s top music high schools participated in a three week AIT@40 Youth Leadership Exchange Program in Cleveland, Ohio from May 5 to May 23 titled “Fostering Youth Leadership in the U.S. and Taiwan through Music and Social Action” organized by the American Institute in Taiwan (AIT), the Youth Programs Division at the Bureau of Educational and Cultural Affairs (ECA), World Learning, and the Cleveland Council on World Affairs.  Participants were selected based on their leadership potential, commitment to community service, and school performance.

Established in summer 2018 by New York’s Carnegie Hall, NYO Jazz shines a spotlight on the depth of talent found among young jazz players across the United States.  The program offers talented teens the opportunity to perform as cultural ambassadors for their country, sharing a uniquely American musical genre with people around the world through an international tour each summer.  The members of the 2019 NYO Jazz—hailing from 15 US states and drawn from every region of the country—have been recognized by Carnegie Hall as being among the finest jazz musicians in the country, following a rigorous and highly-competitive audition process.

In preparation for NYO Jazz’s Carnegie Hall concert and 2019 Asia tour, the group’s musicians will participate in an intensive two-week training residency from July 14-26 on the campus of Purchase College, State University of New York, located in Westchester County, just north of New York City, where they will undertake their initial training and rehearsals at the College’s highly-regarded Performing Arts Center.  The musicians will have the opportunity to play alongside talented peers and learn from the NYO Jazz faculty, comprised of world-class jazz masters, who will lead in-depth training workshops, master classes, and other seminars on essential music skills.  Following its residency, each summer NYO Jazz performs at Carnegie Hall with a celebrated guest artist before embarking on a tour to some of the world’s great music capitals.  As part of their travel schedule, NYO Jazz musicians also have opportunities to meet and collaborate with young local musicians and experience the richness of different cultures and music.

NYO Jazz builds on the success of the acclaimed National Youth Orchestra of the United States of America (NYO-USA) and its sister ensemble for younger musicians NYO2, programs created by Carnegie Hall in 2013 and 2016, respectively, to bring together the finest young classical musicians from across the country each summer for training, performances and international touring.  Each of these prestigious national programs—free to all participants—is dedicated to the proposition that talented young musicians thrive when they have the opportunity to expand their musical, social, and cultural horizons and share their artistry with audiences around the globe.  Since 2013, NYO-USA has toured extensively across the US, Europe, Latin America, and Asia, including debuts in Beijing, Shanghai, and Hong Kong as part of a seven-city tour of China in 2015 and concerts in Taipei, Shanghai, Beijing, Seoul, and Daejeon in 2018. Last summer, NYO Jazz’s first-ever international tour included performances at prestigious concert halls and music festivals in London, Amsterdam, Edinburgh, and Berlin.

Trumpet player Sean Jones—one of the jazz’s most outstanding performer-composer-educators—serves as NYO Jazz’s artistic director, leading the ensemble’s faculty as well as directing the orchestra’s performances.  A highly respected and in-demand musician, Mr. Jones has recorded and performed with major artists including Wynton Marsalis and the Jazz at Lincoln Center Orchestra, Illinois Jacquet, Jimmy Heath, Frank Foster, Nancy Wilson, Dianne Reeves, Gerald Wilson, and Marcus Miller.  His relationship with Mr. Miller led Mr. Jones to be selected for the A Tribute to Miles tour in 2011 with Herbie Hancock and Wayne Shorter.  He has also performed with the Cleveland, Pittsburgh, and Youngstown symphony orchestras, as well as Soulful Symphony in Baltimore and a chamber group at the Salt Bay Chamberfest.

Mr. Jones also performs with his own ensembles, and has a longstanding relationship with Mack Avenue Records, with which he has released eight albums.  His most recent is the 2017 release Sean Jones: Live from Jazz at the Bistro.  Heavily involved in education, Mr. Jones is an internationally recognized educator.  He was recently appointed the Richard and Elizabeth Case Chair in Jazz Studies at the Peabody Conservatory of the Johns Hopkins University in Baltimore. Previously, he served as chair of the brass department at Berklee College of Music in Boston.

Renowned for his singular combination of robust swing and poetic insight, Grammy winner Kurt Elling has secured his place among the world’s foremost jazz vocalists.  Declared “the standout male vocalist of our time” by The New York Times, Mr. Elling has garnered unprecedented accolades, including a 14-year run atop the DownBeat Critics Poll, a dozen Grammy nominations, and eight Jazz Journalists Association awards for “Male Singer of the Year.” Mr. Elling’s voice is instantly recognizable, embracing listeners with his warm, rich baritone and navigating the full span of his four-octave range as a virtuoso instrumentalist and a compelling storyteller.  Whether transforming timeless standards or crafting his own enthralling originals, Mr. Elling balances elegant lyricism and technical mastery with wry humor, emotional depth, and keen observations into the human condition.

Mr. Elling’s most recent release, The Questions, vividly exemplifies his ability to respond to the world around him with both urgent immediacy and a unique perspective.  Co-produced by NEA Jazz Master and acclaimed saxophonist Branford Marsalis, the album searches for answers to culture’s most divisive social, political, and spiritual issues in the songs of Bob Dylan, Carla Bley, and Leonard Bernstein, and the poetry of Rumi and Wallace Stevens.  Mr. Elling had previously joined Mr. Marsalis and his long-running quartet for 2016’s Grammy-nominated Upward Spiral, which All About Jazz hailed as “suffused with graciousness, beauty, and, on occasion, heartbreak.”