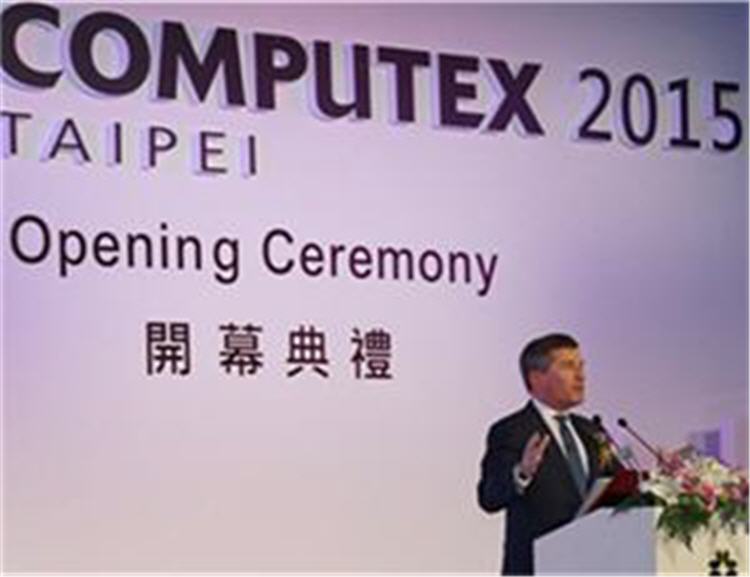 As I flew into Taiwan on Sunday, I had the chance to see some wonderful things: the shimmering blue waters of Taiwan’s coast, the skyscrapers of Taipei and to the north, Yangmingshan National Park.

While I was up in the air, I was reminded of an old fable that Taiwan parents often tell their children. It’s called “The Frog in the Well” and it’s about a frog that takes a life-changing flight.

I mention this story, not only because Taiwan parents have used it for generations to teach their children about thinking broader and reaching higher.

I also mention it because we are all thinking about embracing the future and the great potential of the digital economy which – as we can see from the technologies and businesses exhibited at Computex today- Taiwan has already done so much to build.

In the story, a frog lives for most of his life at the bottom of a well, and believes the world is defined only by what he has seen. Day after day, birds swoop down to tell him about the world outside but he refuses to listen.

Finally a sparrow flies into the well, puts the frog on his back, and flies him around the world. The frog sees mountains, rivers, valleys, the wide sky and the blue sea. He is amazed.

When the bird returns him to the well, the frog thanks him for showing him the world – and vows never again to descend into the darkness.

As I have said before audiences in Tokyo and Korea, the digital economy is no longer just one part of the traditional economy. It is the economy. It has transformed the way we conduct business, communicate and share information, allowing us to achieve previously unimaginable things.

You might say the digital economy is the sparrow of our modern age.

The question of our time is: how can we ensure this digital economy continues to lift and carry us into a sustainable and prosperous future?

Taiwan and the United States recognize the answer to this question: Supporting the open, global internet, the free flow of data across borders, and the continued development of the global digital economy will allow our innovators and entrepreneurs to do exactly that.

Cross border data flows are the lifeblood of the digital economy. They are a critical component to securing the future viability of the internet. That constant stream of data flowing seamlessly across national borders benefits consumers, regulators, and businesses, and stimulates growth across the global economy.

Everyone recognizes that we must also work to address legitimate concerns such as protecting the privacy of our citizens and the sanctity of our children, and safeguarding our cyber security.

We should also have adequate protections for intellectual property so that innovation can continue to flourish. But at the same time, we should make sure that our efforts do not distort trade and we preserve the vibrancy that the internet needs – especially freedom of expression.

These are complex issues and they need all of us – not just governments – to engage and explore, so we can find the right and most representative balance.

We are all stakeholders in the internet, whether we are part of the private sector, civil society, academia, the technical community, governments or just individuals. We all deserve a seat at the table.

At Computex, one thing is clear: Taiwan is committed, ready and well positioned to maintain and expand its regional and global influence in the digital economy. It is one of the strongest democracies in the Asia-Pacific region. It is a major regional trade and investment power – and an important APEC economy.

So what better locale than here; what better venue than Computex; and what better time than now, to announce the deepening of our cooperation through the launching of a U.S.-Taiwan Digital Economy Forum?

The Forum, which we plan to hold later this year, will include interagency delegations led by senior economic policymakers from the U.S. and Taiwan. It will also include participants from government, academia, civil society, and the private sector.

This high-level, multi-stakeholder platform will give us the opportunity to explore ways to strengthen our partnership and coordination on digital trade, innovation and internet policy issues.

Many people in this room will be instrumental in making this new Forum a success.

My Bureau takes a leading role on internet policy and governance issues for the US Government.

So our own U.S. Coordinator for International Communications and Information Policy, Ambassador Daniel A. Sepulveda, will lead the United States’ interagency delegation to the Forum.

On the Taiwan side, we will be honored to work with Minister Woody Duh from the National Development Council, who will lead Taiwan’s delegation, supported by Minister without Portfolio Jaclyn Tsai.

As Secretary Kerry said at Korea University last month, we will know that the digital economy has succeeded when – quote – “an open, secure internet is as widespread as electricity or cellphone coverage itself. When it is fully integrated into everyday life in every corner of the globe.”

Reaching that future will require political will and partnerships – and we are so thankful and fortunate to have a friend and like-minded partner in Taiwan.

Today, most of us already trade, conduct business, communicate, share information and interact with people in ways we never dreamed of. Through venues like Computex, and as partners in the forthcoming Forum, we can make sure that sparrow lifts our economies ever higher.