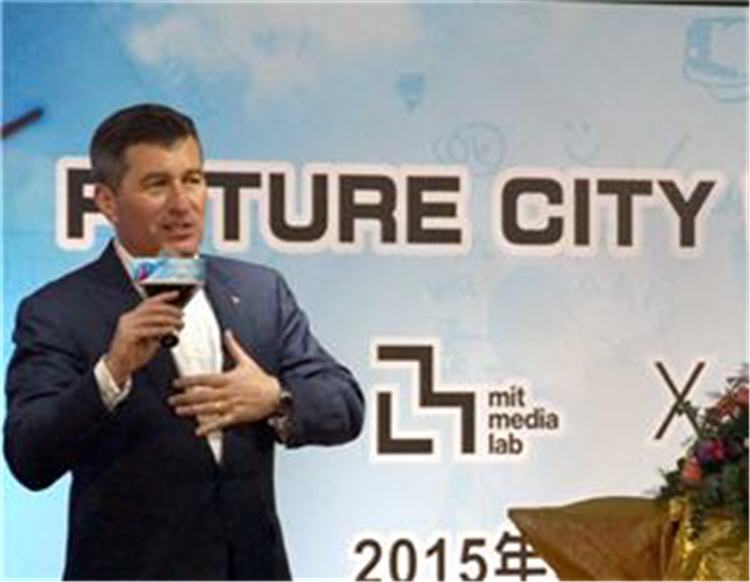 It’s an honor to be part of today’s ceremony.  And as a former businessman myself, it’s a pleasure to speak with innovators and aspiring entrepreneurs like you.

Before I was Assistant Secretary of State for Economic and Business Affairs, I was the U.S. Ambassador to France, and before that I spent 20 years working as President and CEO in the entertainment industry in California.

I ran an award-winning entertainment companies such as The Jim Henson Company, which created the world-famous “Muppets.”

I also worked at a company called Wildbrain which created an innovative educational TV series called “Yo Gabba Gabba!”

I want to tell you a quick story about that program.

When I worked at Wildbrain I met these young, creative entrepreneurs in Southern California that wanted to reinvent children’s television.  They were parents that didn’t want to watch shows with their children that they couldn’t stand.  They wanted to put the “cool” back in preschool.

They created a show that brought in young indie rock bands like the Ting Tings, the Shins, the Roots, Weezer, and Devo.  They even had beatboxer Biz Markie teaching counting.  So guess what… no one wanted to buy it.  They were scared.  It was different.  No one had seen anything like it before.  What if the show failed?

These entrepreneurs borrowed money to produce one episode and put it up on their own website.  Traffic was so high that the server crashed.  They moved it to youtube and received millions of hits.  Now networks called us begging to pick up the show they had passed on. Being an entrepreneur means you don’t listen to “no”.  You keep pushing.  If you fail, you learn from your failure.

Having shared that story, I am profoundly aware that the world has changed in so many ways, especially for people like you.

You’re part of a generation that has grown up with two seemingly opposed realities.

One is the idea that the internet, technology and other hallmarks of modern life have made things easier, more accessible and easier to connect with a global community.

But the other reality is, this:  when it comes to finding economic opportunity, whether that’s finding a job or building a business, there is nothing easy at all.  You’re on your own. So what does a young person do in a world where the only message seems to be:  “Create it yourself”?

I think we all know the answer to that question.  I certainly did as a businessman in California:  It’s about being an entrepreneur.

But being an entrepreneur isn’t enough.  You can dream about what you want.  But you also need support in many different ways.

That can include a business education – I received an MBA myself– or start-up money so you can launch your business.  It can be an incubator where you can develop your idea, and in the larger sense, a government that adopts policies that support the aspirations of people like you. It can also be a reliable and respected system of patents, copyrights, trademarks and trade secret protection to promote the products of your innovation and hard work.

As you heard from Dr. Larson, it can mean support from a university that understands the importance of the links between education, innovation and economic opportunity – and the importance of supporting entrepreneurs so that societies can benefit and prosper.

MIT has been educating leaders since 1861 – when the industrial revolution was at full tilt.  Now it’s a leader in the next revolution.

Today, faculty members, research staff, and students at the Media Lab work in more than 25 research groups on more than 350 projects.  They include digital approaches for treating neurological disorders, creating stackable electric cars for sustainable cities, and creating new imaging technologies that can “see around a corner.”

Media Lab entrepreneurship programs have already resulted in more than 130 spin-offs – so I am sure you are proud and excited to be part of this.

Even the building in which we’re sitting reflects the can-do spirit that is so obviously encouraged here.  It used to be an Air Force facility.  Now it’s the TAF Innovation Base.

But I’m not only here as a former businessman.

I’m also here to tell you that my government – and my Bureau – are working in many different ways to support entrepreneurs and innovators in the Asia Pacific region and around the world. Through various efforts such as our Global Entrepreneurship Program – or GEP – we work with the private sector and other partners within the U.S. government to train and empower thousands of aspiring entrepreneurs.

We create programs and workshops similar to this one, and make tools and networks available to you.  We help small businesses expand into new markets.  We help mobilize new investments. We connect emerging innovators with mentors and networks, and we expand access to capital. As we support entrepreneurs in hands-on ways, we also work with other economies to create better environments for innovators like you.

That includes working to implement and enforce intellectual property rights so no one can steal your ideas or new products.  By protecting innovators and creators, we also reassure their investors to take those risks which propel innovation.

We are happy to be long-term and like-minded partners with Taiwan on IPR protection – not only bilaterally but through organizations like the WTO and APEC.

We undertake these policies not only to protect creators but to generate revenue and create jobs. And that’s why today, I am pleased to announce the launch of an IP and Innovation Joint Workplan, dedicated to enhancing this climate for innovation.

In fact, I am joined today by U.S. Patent and Trademark Office Senior Counsel Mark Cohen, who’s part of a team of U.S. and Taiwan partners focused on precisely that.

In a world where the message is “Create it yourself,” it’s critical to make sure that what you create isn’t just protected but rewarded.

So as this new joint strategy shows, we are very much in your corner as innovators.  I would like to share three big reasons why we support you.

First of all, each one of you is a winner.  That’s why you’re here today.  We know that when you back winners, they tend to spread their success around.  They grow communities and economies. That’s why entrepreneurs and small to medium businesses are the backbone of virtually every economy in the world.

Secondly, young people are an enormous human resource in the world, and they’re not being supported enough.

Third, as I mentioned earlier, young people around the world have grown up on the internet and connective technology.  We need to harness that potential so they can build businesses, distribute their works, network with others, identify funding sources, and succeed.

When we do that, we help to empower a new generation of problem solvers – which is critical, given the challenges we face around the world.

We have a choice.  Do we stand by and let economic frustrations grow?

Or do we find ways to support young people, so they can build and develop their ideas and grow their communities and their national economies, and their regional partnerships?

There is really only one answer.

One of the great – I would even say magical – effects of entrepreneurism is its power to ripple outwards.

When you create a new product or service, and then build a business around it, it isn’t just you that benefits.  It’s the people you hire.  They get a salary that will help their families.  It’s also the customers who win from the service or the product or the social benefit you are offering. And when other entrepreneurs do similar things, whole communities begin to see the benefits and prosper.

Imagine what we can do when we empower more entrepreneurs like you to work, not only for yourselves but across this region.

You’ll be able to identify common challenges that no economy can meet by itself, like lifting people out of poverty, combating climate change, or preventing the spread of disease.

You can share your best ideas and your most inspired works.

You can communicate in new ways with people across cultures and between faiths.

In writing your own futures, you’ll write better ones for everybody.

President Obama was recently talking with entrepreneurs and he said:  “I believe that entrepreneurs like you can make the world a better place, one idea at a time.

“You are going to be how change happens – one person, one step, one business, one city, one country at a time.”

As I look at you, I can see that’s true.  And before I conclude, I want to share a quote from Thomas Edison.

As you probably know, he was one of America’s most famous entrepreneurs, who invented so many things, from movie cameras to lightbulbs.

Looking around this room, I see the kind of people who have already found a way that works for them.  All you need is a little support.  And here under this new partnership between the Taiwan Air Force Innovation Park and the MIT Media Lab, you are in good hands.

So, my sincere congratulations on being part of this fantastic program, and we all look forward to seeing what you can achieve – and how that will contribute to Taiwan’s future, and the world’s future, in the months and years to come.