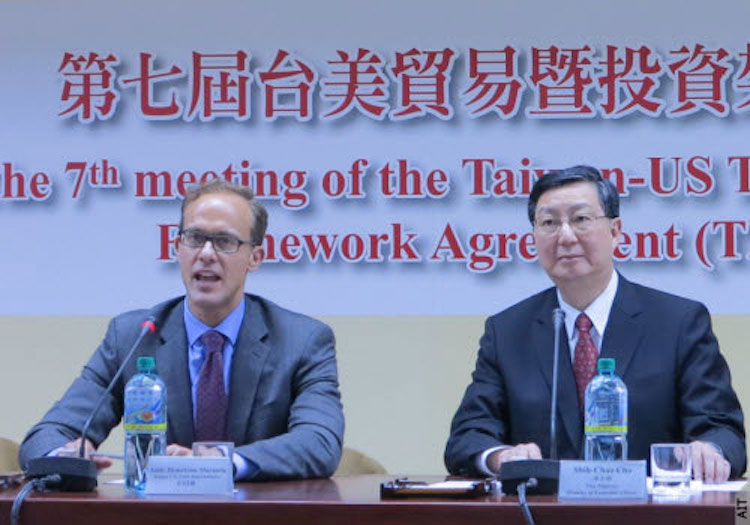 The U.S.-Taiwan Trade and Investment Framework Agreement (TIFA) is the core mechanism through which the United States and Taiwan explore ways to deepen our economic relationship. (Photo: AIT Images)

Taipei, Taiwan – Deputy United States Trade Representative Demetrios Marantis today praised the hard work of both sides and the positive outcomes achieved in meetings of the U.S.-Taiwan Trade and Investment Framework Agreement (TIFA) Council. The meetings, held under the auspices of the American Institute in Taiwan (AIT) and the Taipei Economic and Cultural Representative Office (TECRO), produced numerous results, including new joint statements on investment principles and information and communication technology (ICT) services, and the launch of new TIFA working groups on investment and technical barriers to trade. The United States welcomed Taiwan’s agreement to conduct bilateral technical exchanges to facilitate the establishment of science-based maximum residue levels for pesticides to enable Taiwan to enjoy the benefits of new, safer and more environmentally-friendly products.

“The resumption of TIFA talks between Taiwan and the United States represents a new stage in our economic relationship that will more fully open the lines of communication on trade and investment,” said Ambassador Marantis. “The dedication of our partners from Taiwan to achieving positive outcomes in investment, information and communication technology services, and other areas is a testament to President Ma’s vision for Taiwan’s economic opening and deepening ties with regional and global partners.”

In addition to the new statements of joint principles on investment and ICT services, and the formation of the working groups on investment and technical barriers to trade, Ambassador Marantis also welcomed Taiwan’s progress in generating strong momentum in other areas, such as the recent passage of amendments to the Trade Secret Act to increase deterrent penalties for trade secret misappropriation and the rolling out of a two-year pilot program to help create a more stable market for medicines, including innovative medicines, in Taiwan’s health care system. Ambassador Marantis also underscored his request that Taiwan’s food safety measures – including those relating to meat exports – are based on science and consistent with international standards.

The United States and Taiwan reaffirmed the importance of cooperation in regional and multilateral fora including APEC and the WTO. The two sides agreed on the importance of accelerating negotiations to expand the Information Technology Agreement and continuing cooperation on an International Services Agreement.

Ambassador Marantis was joined in the TIFA meetings by officials from USTR and the Departments of State, Commerce, and Agriculture, as well as officials from AIT. Members of the delegation will continue to participate in related bilateral meetings on March 11 and 12, and both sides agreed to intensify staff level work in the coming months to seek additional progress before the next TIFA Council meeting. More broadly, both sides committed to work in Washington and in Taipei to expand the U.S.-Taiwan trade and investment relationship.