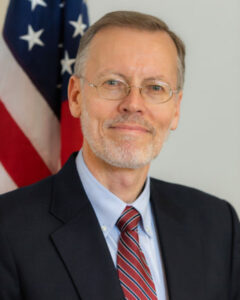 Mr. W. Brent Christensen was the Director of the American Institute in Taiwan from August 2018 to July 2021.

Mr. Christensen has been in the United States Foreign Service for more than 30 years and has extensive experience in senior positions related to Taiwan and China.  Mr. Christensen previously served as Deputy Director of the American Institute in Taiwan’s Taipei office.  Prior to that, he was Director of the State Department’s Office of Taiwan Coordination, where he had a primary role in formulating U.S. policy toward Taiwan.  He has served three assignments at the U.S. Embassy in Beijing, the most recent being Environment, Science, Technology and Health Counselor.

Mr. Christensen has also served as a Senior Level Career Development Advisor in the State Department’s Human Resources Bureau.  Prior to that assignment, he served as the Foreign Policy Advisor at the Asia-Pacific Center for Security Studies (APCSS).  Other overseas postings include Hong Kong and South Africa.  Mr. Christensen also served as a Congressional Fellow on the staff of Senator Olympia Snowe.  Prior to joining the Foreign Service, he was a captain in the U.S. Air Force.

Mr. Christensen is a career member of the Senior Foreign Service and holds the personal rank of Minister-Counselor.  Mr. Christensen earned an M.A. in East Asian Studies from the George Washington University, a B.A. in Chinese language and literature from Brigham Young University, and a Doctor of Medical Dentistry degree from the Oregon Health and Sciences University.