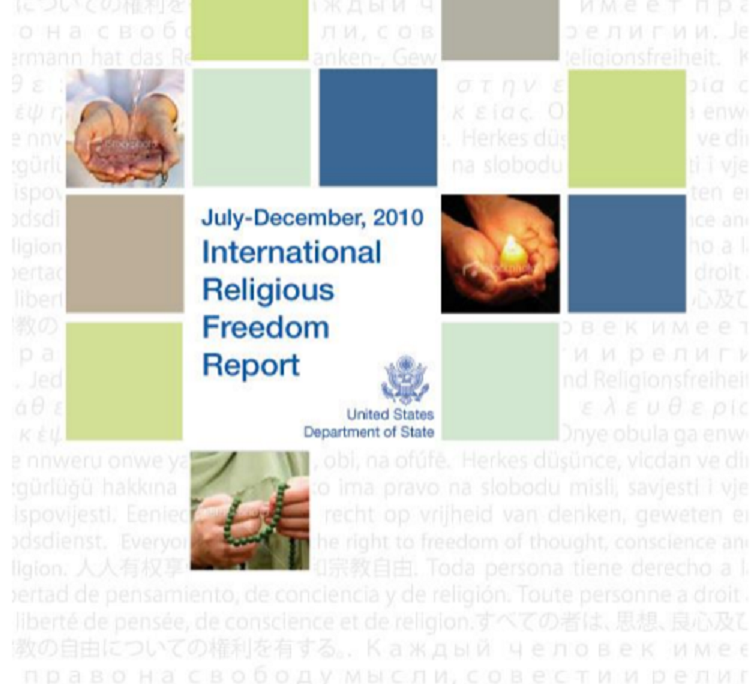 Released by the Bureau of Democracy, Human Rights, and Labor September 13, 2011

The constitution and other laws and policies protect religious freedom and, in practice, the authorities generally enforced these protections.

There were no reports of societal abuses or discrimination based on religious affiliation, belief, or practice, and prominent societal leaders took positive steps to promote religious freedom.

The American Institute in Taiwan (AIT) discusses religious freedom with the authorities as part of its overall policy to promote human rights.

Taiwan has an area of 13,900 square miles and a population of 23 million. According to the 2006 Government Information Office Yearbook, the Religious Affairs Section of the Ministry of the Interior (MOI) estimated that 35 percent of the population considers itself Buddhist and 33 percent Taoist. While the overwhelming majority of religious adherents are categorized as either Buddhist or Taoist, many adherents consider themselves to be both Buddhist and Taoist.

There also may be an overlap between practitioners of Buddhism, Taoism, and other traditional Chinese religions, and Falun Gong practitioners. Falun Gong is a self-described spiritual discipline that combines qigong (a traditional Chinese exercise discipline) with the teachings of founder Li Hongzhi. Falun Gong is registered as a civic rather than a religious organization. According to an academic source, Falun Gong membership exceeds 1,000,000 and continues to grow.

Small percentages of the population consider themselves Protestant, Roman Catholic, or Sunni Muslim. The Church of Scientology, Baha’i Faith, Jehovah’s Witnesses, the Mahikari Religion, The Church of Jesus Christ of Latter-day Saints (Mormons), and Unification Church are registered. Other Christian denominations include Presbyterians, the True Jesus Church, Baptists, Lutherans, Seventh-day Adventists, and Episcopalians. The majority of the indigenous population of 507,000 Aborigines is Protestant or Catholic. There are also a small number of adherents of Judaism, although they are predominately expatriates.

While the authorities do not collect or independently verify statistics on religious affiliation, they maintain registration statistics reported voluntarily by religious organizations. The MOI Religious Affairs Section believes that these statistics significantly understate the number of religious believers. The MOI Religious Affairs Section estimated that approximately 50 percent of the population regularly participates in some form of organized religious practice, as distinguished from activities connected with traditional Chinese folk religions.

Please refer to Appendix C in the Country Reports on Human Rights Practices for the status of the government’s acceptance of international legal standards http://www.state.gov/j/drl/rls/hrrpt/2010/appendices/index.htm.

The constitution and other laws and policies protect religious freedom and, in practice, authorities generally enforced these protections. There is no official religion.

Religious organizations are permitted to operate private schools. Compulsory religious instruction is not permitted in any Ministry of Education (MOE) accredited public or private elementary, middle, or high school. High schools accredited by the MOE, while not allowed to require religious instruction, may provide elective courses in religious studies, provided such courses do not promote certain religious beliefs over others.

Universities and research institutions may have religious studies departments. There are many private theological institutes. The MOE has accredited the Dharma Drum Mountain Community University established by the late Buddhist Master Sheng Yen, the School of Theology, Chang Jung Christian University, College of Buddhism, Huafan University, College of Buddhist Studies, and Fo Guang University. According to the MOE, there were 10 additional university level religion departments and/or theological institutes under review for accreditation.

No religious holidays were treated as national holidays.

There were no reports of abuses, including religious prisoners or detainees.

There were no reports of societal abuses or discrimination based on religious affiliation, belief, or practice, and prominent societal leaders took positive steps to promote religious freedom.

On August 3, the MOI held its annual ceremony to honor more than 258 religious groups, which included Catholic, Protestant, and Buddhist groups, for their contributions to public service, social welfare, and social harmony.

AIT discusses religious freedom with the Taiwan authorities as part of its overall policy to promote human rights.

AIT regularly meets with representatives of faith-based social service organizations as part of its efforts to enhance and promote human rights and religious freedom. These organizations are involved extensively in human trafficking and migrant labor issues on Taiwan and promote interfaith religious tolerance.