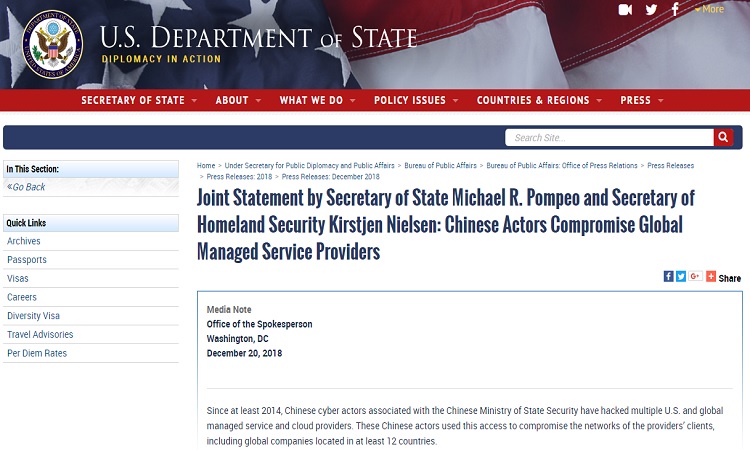 Since at least 2014, Chinese cyber actors associated with the Chinese Ministry of State Security have hacked multiple U.S. and global managed service and cloud providers. These Chinese actors used this access to compromise the networks of the providers’ clients, including global companies located in at least 12 countries.

The United States is concerned that this activity violates the 2015 U.S.-China cyber commitments made by President Xi Jinping to refrain from conducting or knowingly supporting “cyber-enabled theft of intellectual property, including trade secrets or other confidential business information, with the intent of providing competitive advantages to companies or commercial sectors.” China has also made this commitment with G20 and APEC members as well as in other bilateral statements.

Stability in cyberspace cannot be achieved if countries engage in irresponsible behavior that undermines the national security and economic prosperity of other countries. These actions by Chinese actors to target intellectual property and sensitive business information present a very real threat to the economic competitiveness of companies in the United States and around the globe. We will continue to hold malicious actors accountable for their behavior, and today the United States is taking several actions to demonstrate our resolve. We strongly urge China to abide by its commitment to act responsibly in cyberspace and reiterate that the United States will take appropriate measures to defend our interests.

Original Links of the Joint Statement