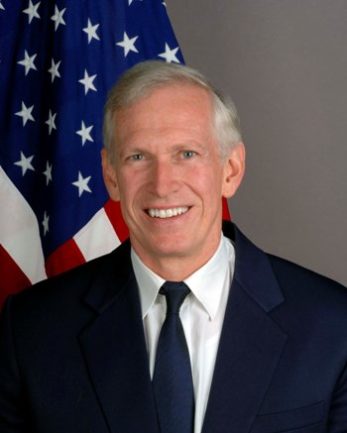 Ambassador (ret) James F. Moriarty assumed his position as Chairman of the Board of Trustees of the American Institute in Taiwan (AIT) in October 2016. AIT is a non-profit, private corporation established pursuant to the Taiwan Relations Act to manage the U.S. unofficial relationship with Taiwan. The AIT Chairman participates in policylevel discussions on Taiwan. He represents the Administration in periodic visits to Taiwan and in meetings with Taiwan representatives in the United States.

Ambassador Moriarty has decades of experience on Taiwan, China, and Asia at the senior-most leadership levels.

Ambassador Moriarty served as Special Assistant to the President of the United States and Senior Director for Asia at the National Security Council (2002-2004). In that role, he advised the President and coordinated U.S. policy on East Asia, Southeast Asia, the Pacific, and South Asia. Moriarty served previously as Director for China Affairs at the National Security Council (2001-2002). He led the political sections at the U.S. Embassy in Beijing (1998-2001) and the American Institute in Taiwan (1995-1998). In Beijing, he helped negotiate agreements that put to rest tensions resulting from the U.S. bombing of the Chinese Embassy in Belgrade and the collision of a Chinese fighter jet with a U.S. EP3. In Taipei, he helped create the template for the United States to work with a democratically-elected Taiwan administration. Moriarty was U.S. ambassador to Bangladesh (2008-2011) and Nepal (2004-2007). Earlier assignments in Moriarty’s 36-year career as a U.S. diplomat included additional postings in Taipei (1988-1989) and Beijing (1989-1991) as well as work in Washington, D.C., South Asia, and Africa.

Since retiring from the Foreign Service in 2011, Ambassador Moriarty has worked in the private sector and as an independent consultant. He has spoken on U.S.-Asia relations, including at universities, in public fora, and before U.S. Congressional committees. Living in Jakarta in 2013-2014, Ambassador Moriarty set up PROGRESS, a U.S. Government project to build capacity in ASEAN’s political/security and social/cultural communities. Since 2016, Ambassador Moriarty has been the Country Director for the Alliance for Bangladesh Worker Safety, a coalition of North American importers of ready-made garments. As Country Director, Moriarty provides oversight and strategic guidance to a $50-million initiative that is building a sustainable culture of worker safety in Bangladesh.

Ambassador Moriarty lives in Hawaii with his wife, Lauren. He is fluent in Mandarin Chinese.