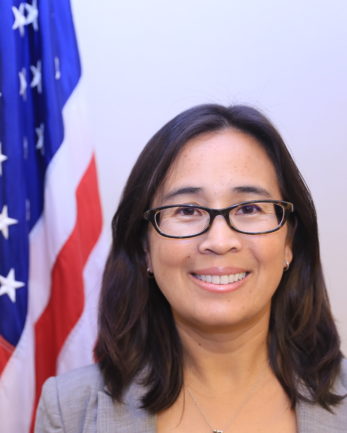 Since joining the U.S. Department of State in 2010, Ms. Wong has served in the Bureau of Consular Affairs in Washington, D.C. and at the U.S. Consulate General in Guadalajara, Mexico, and completed the long-term Economics and Commercial Studies Training Course at the Foreign Service Institute.

Originally from Colorado, Ms. Wong holds a Bachelor of Arts in East Asian Studies from Barnard College as well as a Master of Arts in International Relations and Economics from the Johns Hopkins School of Advanced International Studies.  Prior to the Foreign Service, she worked at the China Law Center at Yale Law School, and also taught English in China as a Princeton in Asia fellow.

Ms. Wong enjoys cooking, skiing, traveling, and speaks Mandarin and Spanish.  She is married to Thomas Wong, a Foreign Service Officer assigned to AIT Taipei; they have two young children.