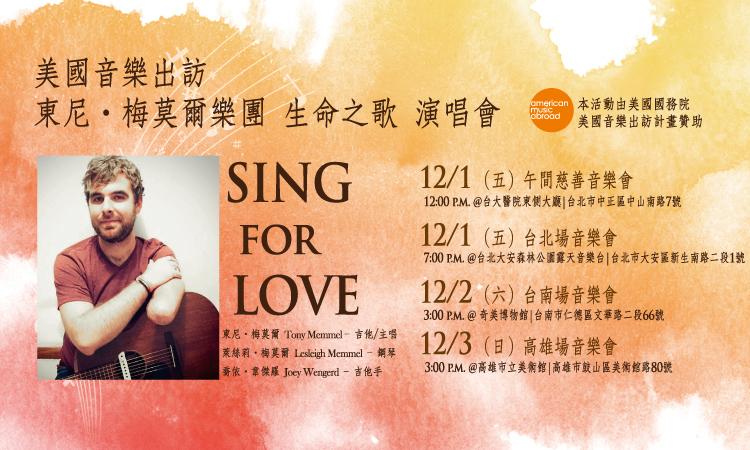 One-Handed Guitarist Tony Memmel and His Band Bring SING FOR LOVE Concerts to Taipei, Tainan, and Kaohsiung as part of the American Music Abroad Program December 1-3, 2017

The American Institute in Taiwan is honored to present the legendary one-handed guitarist Tony Memmel and His Band in Taipei, Tainan and Kaohsiung from December 1-3, 2017.  Tony Memmel and His Band’s visit to Taiwan is part of the 2017 American Music Abroad program, which is co-produced by American Voices, the U.S. Department of State’s Bureau of Educational and Cultural Affairs, and the American Institute in Taiwan.

In partnership with the Department of Cultural Affairs of Taipei City Government, Chimei Museum, the Kaohsiung Museum of Fine Arts, National Taiwan University Hospital, and the Taipei Artist Village, Tony Memmel and band members Lesleigh Memmel (piano) and Joey Wengerd (guitar) will present three public concerts and a charity recital at a local hospital while in Taiwan.  Taiwan’s acclaimed blind pianist Mr. Hsu Che-Cheng will join Tony on stage for an evening concert at Taipei Da-an Forest Park on December 1.

Although Tony Memmel was born without a left forearm and hand, he taught himself to play the guitar by building a homemade cast out of duct tape that secures a guitar pick to his arm, and allows him to pluck and strum the strings.  Today, Tony is an award-winning singer-songwriter.  His songs have inspired people around the world with their strong messages of perseverance, hope, discovery, and love.

The public performance schedule for the American Music Abroad Taiwan 2017 Tour is as follows:

American Music Abroad is a people-to-people cultural exchange program designed to communicate America’s rich musical contributions and diverse culture to the global music scene.  In 2017, Tony Memmel and His Band were selected to participate in the State Department’s “American Music Abroad” program touring to Singapore, Malaysia, Indonesia, Cambodia and Taiwan as cultural ambassadors.

For more information about the artists and this program, please visit:

Lesleigh grew up sitting on a piano bench next to her grandpa Russ.  Together, they filled the house with old folk songs.  He played without a page of sheet music in front of him and passed his knowledge of music on to Lesleigh in the oldest musical tradition – aurally.  Lesleigh has never taken a formal lesson, yet her piano playing has been compared to Ben Folds and Billy Joel.

At the age of 3, when he started singing along to Bruce Springsteen over his parents’ radio, Joey Wengerd knew that music was his calling.  Born in Columbus, Ohio, Joey picked up his first six-string at the age of 9 and began writing songs soon after, setting in motion a life-long passion for creating music and a career of bringing joy to many.

Joey moved to Nashville in 2006 to attend Belmont University, studying Commercial Guitar and Music Business. He quickly immersed himself in the local scene, and has since been working in every facet of the music industry. From performing as a guitarist for audiences of thousands while opening for artists like Hunter Hayes and Josh Turner, to working as a songwriter and music business & marketing consultant in Nashville, Joey loves sharing his music and doesn’t take for granted the awesome journey that began by singing along to the radio.

Tony Memmel’s songs from the below links can be downloaded and played by media in Taiwan: