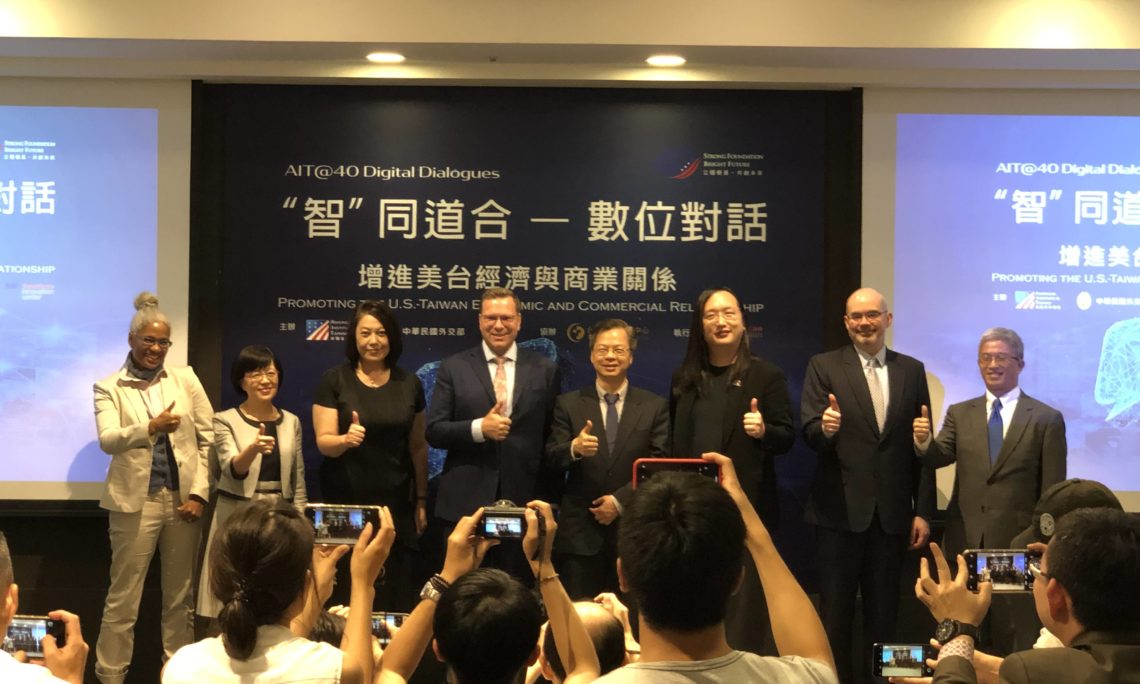 It is my great pleasure to be here today to open this public forum to discuss the results of our second AIT@40 Digital Dialogue.  These dialogues are the first of their kind anywhere in the world using artificial intelligence to facilitate idea sharing between a foreign mission and a local community to identify how the two sides can work together more effectively.

Our thanks once again go out to Digital Minister Audrey Tang for pioneering this platform and helping to bring it into the mainstream.  We hope other foreign offices will follow our lead and use innovative methods to solicit ideas from the public on how to strengthen their own cooperation with Taiwan.  We thank Minister Tang, and Taiwan in general, for helping to show the world that democracy is among other things a source of policy innovation.

As many of you know, this year marks the 40th anniversary of AIT and the Taiwan Relations Act.  During our year-long AIT@40 campaign, the AIT Director will be giving four major speeches, one on each of his priorities for his tenure as AIT Director, which he calls the “four promotes,” or the 四個增進.  Each of these speeches in turn launches a digital dialogue on that topic.  Just to remind all of you, the four promotes are:  promoting Taiwan’s global engagement, promoting U.S.-Taiwan economic and commercial ties, promoting U.S.-Taiwan security cooperation, and promoting U.S.-Taiwan people to people ties.  At the end of each dialogue, we will hold a public forum, such as this one, to discuss the results of the dialogue.  AIT has launched these dialogues because we are interested in what you, the public, have to say on these matters.  We hope these dialogues will provide creative policy ideas that AIT and our Taiwan counterparts can put into practice.

On June 18, Director Christensen outlined his vision for how the United States and Taiwan can work together in the Indo-Pacific, specifically through economic and commercial cooperation.  Representatives of Japan, Australia, also spoke at that event, and our shared message was clear:  Taiwan is not alone.  It is part of a large family committed to the same shared ideas and values.  Its future remains firmly anchored in a free and open Indo-Pacific. Director Christensen’s speech that day launched the Digital Dialogue that we are discussing today.

The ideas that emerged from that Digital Dialogue can be grouped into three broad categories.

First, the United States should work with Taiwan and other like-minded Indo-Pacific partners to counter Chinese market-distorting practices.  I would preface my comments by stating that Taiwan and the United States share a common objective:   we want to see a China that plays by international rules, respects intellectual property rights, and promotes a vibrant private sector.  If China lived up to its international commitments, and its own stated reform and opening policy goals, it would benefit the United States, Taiwan, and, ultimately, the Chinese people.  Market-distorting subsidies, the theft of trade secrets, forced technology transfer, and promotion of state-controled “national champion” companies stifle innovation and erode productivity.  The social and economic dislocations these actions have created is leading to a political backlash against international trade around the globe.  The United States, Taiwan, and all of our like-minded partners must take concerted and coordinated action now if we are to preserve the rules-based economic order that has done so much to foster peace and prosperity over the past seven decades.

Second, the results of the Digital Dialogue call for strengthening digital economy cooperation in the face of U.S.-China technology and trade tensions.  For decades, the United States and Taiwan have enjoyed close cooperation on technology.  As we move into the digital age – dominated by artificial intelligence, the internet of things, quantum computing, and autonomous vehicles – the United States and Taiwan must build new digital supply chains.  This is already happening.  Many major U.S. technology companies have substantially increased their investments in Taiwan over the last couple of years, especially with respect to AI research and development, semiconductors, and hardware-software integration efforts.  In particular, we look forward to working closely with Taiwan to develop 5G technologies that are provide greater protection from cyber attacks and data theft by international predators.  Our digital economy cooperation is not limited to giant tech companies working together.  As Director Christensen outlined in his June 18 speech, over the next 6-9 months, the U.S. and Taiwan will significantly expand startup cooperation through a recently launched program called StartOpps where we hope to work together on the digital economy and women’s empowerment in Southeast Asia and work to help increase the circulation of talent between Taiwan, the United States, and other like-minded partners through the Talent Circulation Alliance.

The third major idea identified in the Digital Dialogue is the need for the U.S. and Taiwan to pursue a free trade agreement which would anchor Taiwan’s economy with that of the U.S.  There are many in the United States government who are eager to expand the already robust trade relationship between the United States and Taiwan.  The reality is that new FTAs take years to negotiate and there are many ways that the United States and Taiwan can broaden and deepen our trade relationship while we explore that possibility.   Taiwan has proven to be an outstanding partner on many fronts, and year after year it continues to improve its business and investment climate.  We remain hopeful that we can resolved some of our outstanding concerns in agriculture, and we continue to raise the importance of food safety regulations being based on science and consistent with international standards.  We are aware these are sensitive political issues, but from our perspective, it is in the long-run interests of the U.S.-Taiwan economic relationship for us to work together to find a solution and move forward on trade.  I am heartened to see that participants in the Digital Dialogues share our desire to expand the U.S.-Taiwan trade relationship, particularly as we deepen cooperation on the world’s most innovative technologies.

We believe the strategies proposed by you the public during this Digital Dialogue offer creative solutions for promoting U.S.-Taiwan economic and commercial ties.  We look forward to hearing the views of Minister Kung and our panelists on their vision and ideas for how we can deepen our economic relationship.  We at AIT will seek opportunities put the ideas presented here today into practice.

Thank you all once again for coming.