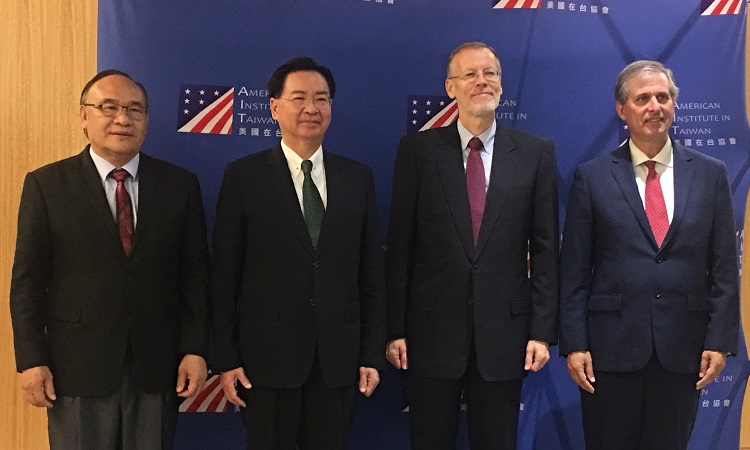 Foreign Minister Wu, Minister Tang, Deputy Assistant Secretary Busby, distinguished guests and friends, good morning.  On behalf of the American Institute in Taiwan, it is my honor and pleasure to welcome everyone today to the first ever U.S.-Taiwan Consultations on Democratic Governance in the Indo-Pacific Region.

It is a privilege to be joined by Deputy Assistant Secretary of State Scott Busby, the most senior official in our Bureau of Democracy, Human Rights, and Labor, whose leadership of this new forum reflects the ongoing U.S. commitment to working with Taiwan to promote good governance and defend democratic institutions throughout the region.

Some of you may recall that the Foreign Minister and I held a press conference at the Ministry of Foreign Affairs back in March to announce the establishment of these Consultations.  It is gratifying to stand before you today at our new AIT facility talking about the consultations in the present tense, and not merely as a plan for the future.

This important new forum is designed to formalize, regularize, and deepen cooperation between the United States and Taiwan on good governance issues.  I believe that governments coordinate best when they meet regularly.  This forum will be held annually going forward, serving as the primary platform for pursuing joint U.S.-Taiwan projects in the region that assist other countries in addressing the governance challenges of the day.

The United States’ vision for a free and open Indo-Pacific has three pillars: an economic pillar, a security pillar, and a governance pillar.  While Taiwan has an important role to play in all three pillars, Taiwan truly exemplifies the good governance we envision for the Indo-Pacific region.  The United States and Taiwan share the belief that advancing transparency and the rule of law in the countries across the region will in turn contribute to the strategic goal of a free, open, and prosperous Indo-Pacific.  Experience has shown us that it is hard for the interactions between nations to be characterized by freedom, peace, and prosperity if the countries themselves do not have these characteristics.   In this regard, one thing I said back in March surely bears repeating:  We couldn’t ask for a better partner than Taiwan in promoting a free and open Indo-Pacific.

The Indo-Pacific encompasses more than half the Earth’s surface, half the human family, and two-thirds of global trade.  Its economic and strategic significance to Americans grows by the day.  We are a Pacific power, and our prosperity and well-being are inextricably linked to this region.

For these and other reasons, the United States has a strong and abiding interest in helping the people of this great region to build institutions that protect fundamental freedoms and embody democratic values, like transparency and equality under the law.

The Consultations seek to share the values of freedom and openness and encourage nations to embrace these values for what they are:  indispensable components of modernization.  Modernization is not a purely economic phenomenon.  To the contrary, it cannot take hold and fully mature without a strong conceptual foundation of democratic values.  Transparency and rule of law are necessary conditions for innovation and entrepreneurship.  Creativity cannot thrive in the absence of civil liberties and basic freedoms.  A liberalizing economy cannot thrive indefinitely under a political regime that refuses to liberalize itself.  Eventually the disconnect between the two will cause distortions that disrupt the economy.

The United States’ goal for this region is simple:  we seek to promote sound, just, and responsive governance through efforts to counter corruption, while encouraging strong civil society and honest business practices.  Harnessing resources in excess of US$400 million, the Indo-Pacific Transparency Initiative will pursue cooperation with allies, partners, and regional institutions, including ASEAN and APEC, to advance these shared principles.  Today’s consultations will focus, among other things, on exploring concrete ways to fully incorporate Taiwan into our Indo-Pacific Transparency Initiative, and more generally, to promote Taiwan as a model of good governance for the entire region.

Today also gives us an opportunity to remember why freedom and openness are so fundamental to societies like ours.  Our success depends upon our commitment to allowing individuals to innovate, thrive, and pursue happiness in the innumerable ways that their hearts and minds direct them to do.  Taiwan has proven time and time again that it understands the logic of freedom.  Taiwan knows how to respond effectively to the needs of the public while governing democratically and justly.  Taiwan has had remarkable success in protecting the rights of minorities, facilitating interfaith dialogue, empowering women to participate fully in the workplace, including in the political arena, and holding elections that are credible in the eyes of its voters and international observers.

Our freedoms, and the democratic institutions that protect them, provide our societies with the resilience, creativity, and confidence needed to respond to any attacks that our adversaries unleash upon us.  We must endeavor to become nimbler and more determined to counter external efforts to sow discord and distrust within our societies.  And such determination begins by recognizing that those of us who are working to align our lives with truth have an inherent advantage, which will ultimately be our decisive advantage, over opponents who traffic in lies.

I hope the Democratic Governance Consultations will serve as just one more reminder that we should take great pride in our own democracies, flawed as they may be, while acknowledging that democracies – at any stage in development – are works in progress that need constant examination and tending.  Taiwan will continue to grow stronger and more democratic.  The United States will continue to become “a more perfect Union,” in the words of our Constitution.  And we hope our efforts will lead to countries across the Indo-Pacific region following the Taiwan model, and coming to know greater and greater prosperity coupled with greater and greater freedom.

Thank you again for coming today and for recognizing the importance of democratic values as the ties that bind us together.

美台關係中的首例！ AIT處長酈英傑很高興參加今天舉辦的「美台印太區域民主治理諮商」機制開幕式。 正如副總統彭斯今年稍早所說：「美國永遠相信，台灣的力行民主是一個國際社會應該舉世支持的模範。」在今天的開幕式上，外交部長吳釗燮部長和酈英傑處長展示了台灣捐贈給美國國務院的「國際宗教自由基金」、為期5年的第一筆的捐助，旨在促進全世界的宗教自由。今天的論壇不僅證明我們相信台灣值得國際支持，同時也是我們深信台灣能力出眾、能夠在許多重要層面支持國際社會的具體表現。處長致詞稿請見：https://bit.ly/2m7Qcsp A first for U.S.-Taiwan relations! AIT Director Brent Christensen was pleased to participate in today’s inaugural session of the U.S.-Taiwan Consultations on Democratic Governance in the Indo-Pacific Region. As Vice President Pence said earlier this year: “America will always believe Taiwan’s embrace of democracy is an example to be internationally supported.” At today’s ceremony, Director Christensen and Taiwan Foreign Minister Wu also presented the first of five annual “International Religious Freedom Fund” awards that Taiwan donates to promote religious freedom worldwide. Today’s event is a testament not only to our belief that Taiwan deserves international support; it also gives tangible expression to our belief that Taiwan is well-equipped to support the international community in many important ways. Read Director’s remarks here: https://bit.ly/2lPLJuA