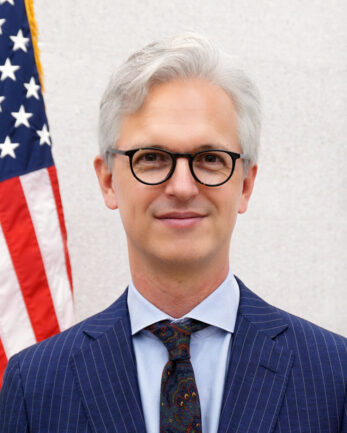 Mr. Cornforth is a career member of the Senior Foreign Service. He assumed the position of Deputy Director of the American Institute in Taiwan in July 2021 after serving as Chief of the Consular Section at the U.S. Consulate General in Guangzhou, China.

Since joining the Foreign Service in 1998, Mr. Cornforth served overseas as a consular and political officer in Jerusalem; Santo Domingo, the Dominican Republic; Mumbai, India; Tunis, Tunisia; and Beirut, Lebanon. Domestically, he served as the El Salvador desk officer in the Bureau of Western Hemisphere Affairs and the Director of the Office of Information Management and Liaison in the Bureau of Consular Affairs’ Office of Visa Affairs.

Mr. Cornforth comes to AIT with extensive experience leading large teams, designing strategies, fostering diversity and inclusion, and promoting innovation. He holds a BA in history from Union College in Lincoln, Nebraska, and is a distinguished graduate of the National War College, where he earned a Masters of Science in Strategic Studies. He speaks Arabic, Hebrew, Mandarin Chinese, and Spanish. His wife Eleanor is a director at the U.S. International Development Finance Corporation, and he has twin nine-year-old children.