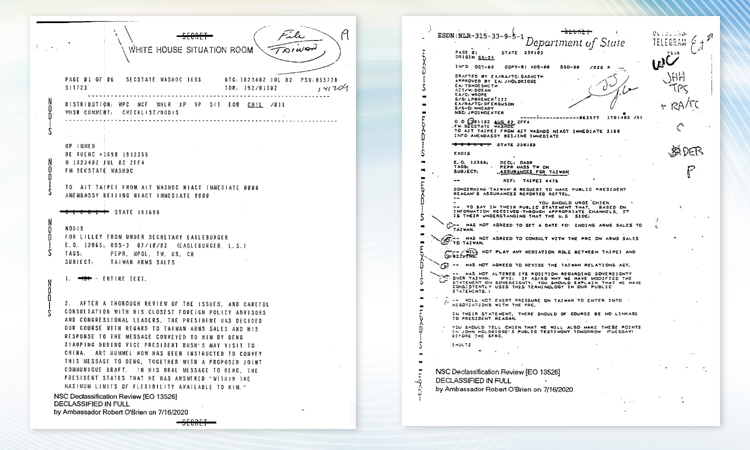 The first declassified cable below, sent on July 10, 1982, from then U.S. Under Secretary of State Lawrence Eagleburger to then AIT Director James Lilley, provides the U.S. interpretation of the 1982 Communiqué as it relates to ongoing U.S. arms sales to Taiwan.  The cable explains that the U.S. willingness to reduce its arms sales to Taiwan is conditioned upon the continued commitment of the PRC to a peaceful solution of cross-Strait differences.  Further, if the PRC were to become more hostile, then the United States would increase arms sales to Taiwan.

The directive indicates that the United States’ chief concern was maintaining peace across the Taiwan Strait, and thus, the quantity and quality of arms provided to Taiwan would be conditioned entirely on the threat posed by the PRC.  The memo ends by offering “this final assurance: U.S. arms sales to Taiwan will continue.”

These same ideas are echoed in an internal presidential memo drafted by President Ronald Reagan on August 17, 1982, which serves as guidelines for U.S. interpretation of the 1982 Communiqué.

The second cable, sent on August 17, 1982, from then U.S. Secretary of State George Shultz to then AIT Director Lilley, offers six assurances to Taiwan, reinforcing the message above.  The United States:

The “Six Assurances” have been a foundational element in U.S. policy towards Taiwan and the PRC. 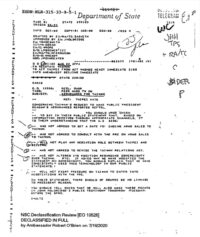 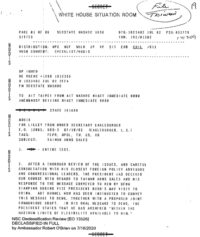