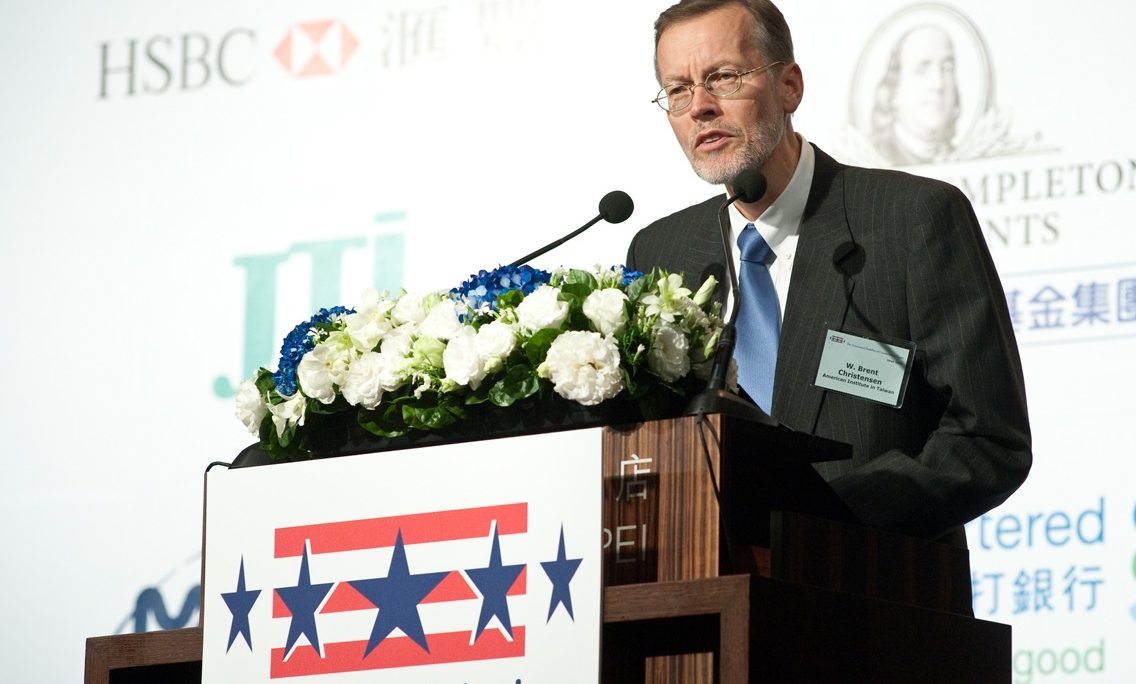 Thank you for your kind introduction.

Good evening!  It is a great honor to be with you all tonight.  I would first like to thank President Ma for his attendance and for his unwavering commitment to deepening U.S.-Taiwan friendship.  I would also like to thank the American Chamber of Commerce, particularly President Andrea Wu and her staff, for organizing this annual Hsieh Nien Fan banquet which gives us an opportunity to celebrate the strength of our commercial and economic relationship.  The U.S.-Taiwan relationship is a friendship forged in history and continuously strengthened by the many bonds between our two peoples.  Ours is a friendship that is refreshed and reenergized with every passing year.  In 2014, as we celebrate the 35th anniversary of the Taiwan Relations Act, it is important to recall the significant role that the U.S.-Taiwan friendship has played not just for the United States and Taiwan, but for the entire Asian region. Our shared values, including our shared commitments to democracy, free trade and human rights, sustain the security and prosperity of our peoples, and help support a diverse, interconnected Asia at peace with itself and the world.

And so it is my great pleasure to speak with you tonight about how the United States and Taiwan are working together to meet the challenges we face both individually and collectively.  As always, our friends in the private sector hold many of the keys to our ultimate success.  I would therefore again like to acknowledge the countless contributions of AmCham and its members to the U.S.-Taiwan relationship. I also congratulate AmCham for successfully hosting the March 2013 annual business summit of the Asia-Pacific Council of American Chambers of Commerce.

This is not an audience that needs convincing about the importance of our trade and economic relationship.  U.S. officials at every level have underscored the importance of economic engagement as a central component of the United States’ rebalance to Asia. The investment in time and energy the United States is devoting to concluding negotiations on the Trans Pacific Partnership – the TPP – is also a recognition of the fact that the Asia Pacific region will be central to U.S. and global economic health for the coming decades. This is a challenging negotiation among economies that together account for over 40 percent of global GDP.

The Asian region is home to the fastest growing markets for U.S. exports, and the United States remains by far the biggest investor in the region, just as we are in Taiwan.  Moreover, the Asia Pacific region is a fast growing source of foreign investment into the United States – and that includes Taiwan, which boasted one of the largest delegations to President Obama’s SelectUSA Summit in Washington last fall.  This was followed shortly thereafter by the visit of former Vice President Siew and his impressive delegation of some of Taiwan’s most prominent CEOs.

Taiwan and the United States

In his landmark January 1 speech, President Ma spoke very eloquently about the need for economic reform, and reminded Taiwan compatriots that the source of Taiwan’s phenomenal economic successes of decades past has been the ingenuity, hard work, and courage of its people.  These virtues are very much part of Taiwan’s DNA, and the evidence can be found everywhere in Taiwan – in its modern infrastructure, in its world-class universities and in its hi-tech science parks.

Indeed, although Taiwan has few natural resources, it has an enormously valuable resource in its talented and creative people, a resource which enriches the U.S.-Taiwan relationship.  Every day and without fanfare, the United States and Taiwan cooperate in enterprises and initiatives in fields as diverse and connected as high-tech, health, science, environmental protection, education, film, journalism, and of course, business. While we expect these exchanges to continue and grow, at the same time we should find new ways to highlight the contributions U.S.-Taiwan collaboration has made to human development.  Shining examples include Academia Sinica President Dr. Wong Chi-huey, who was educated both in the United States and Taiwan and who recently won the prestigious Wolf Prize in chemistry; Oscar-winning director Ang Lee, whose films have won international acclaim; fashion designer Jason Wu, whose creative genius was introduced to Washington by our First Lady, at President Obama’s inaugural ball in 2008; and Taiwan-American NBA superstar Jeremy Lin, who admittedly isn’t from Taiwan but his parents are.  And in the world of business and high-technology entrepreneurship, there is a long list of distinguished figures that includes many of the people here with us tonight.

Taiwan’s Role as a Regional Leader

The U.S.-Taiwan collaboration has also yielded benefits beyond our borders.  We look to Taiwan as a close partner on transnational issues such as environmental protection, disaster relief, development assistance and combating human trafficking.  As someone who has worked on environmental issues in Asia for many years, I would particularly like to commend Taiwan for its emergence as a leader in environmental protection policies and practices.  Taiwan has demonstrated its ability to play a constructive and responsible role in protecting the environment, an issue that affects all of us.  Throughout the past year, the U.S. Environmental Protection Agency and Taiwan’s EPA have been celebrating twenty years of cooperation.  During those 20 years, Taiwan has changed from being a consumer of information on environmental practices to becoming a leader, through such actions as hosting environmental protection training for officials from Asia, Africa and the Americas.  We look to Taiwan to continue in this important leadership role.

TIFA and the Year Ahead

Last year at this same event Director Marut recalled Taiwan’s November 2012 entry into the United States’ visa waiver program. I am proud to tell you tonight that since this program was implemented, Taiwan travel to the United States is up nearly 35 percent, and U.S. travel to Taiwan is increasing too. This past January, the New York Times Magazine listed Taiwan number 11 on its list of 52 “must visit” global travel destinations for 2014.

Last year Director Marut also highlighted the resumption of our Trade and Investment Framework Agreement talks – or TIFA – after a six-year hiatus. The next TIFA Council meeting that will take place soon in Washington will build on the steady progress we have achieved with Taiwan under this framework in recent months.  With many thanks for the active and encouraging support of both AmCham and our partners in Taiwan’s ministries, we are looking forward to an engaging and productive discussion that sets the stage for more trade and investment between the United States and Taiwan in the coming years.

Our colleagues in the U.S. government, Congress, and the private sector recognize that there is new energy and spirit behind the reform discussions taking place in Taiwan today.  In the next round of TIFA talks, we want to seize on this momentum and conduct a TIFA round that charts a path forward toward long-term expansion in our economic relationship. Expectations are high, as they should be, as we step forward into the next phase and seize this moment to build upon the dynamism, pragmatism, and confidence that have always characterized our long friendship.

In closing, and on behalf of the entire team at the American Institute in Taiwan, I would like to express our sincere thanks to all of you for your dedication to the long and vibrant friendship the United States and Taiwan share.  Looking back at what we have accomplished together, we have every reason to look forward to even greater successes in the years to come.

I wish you good health, prosperous business, and good luck.