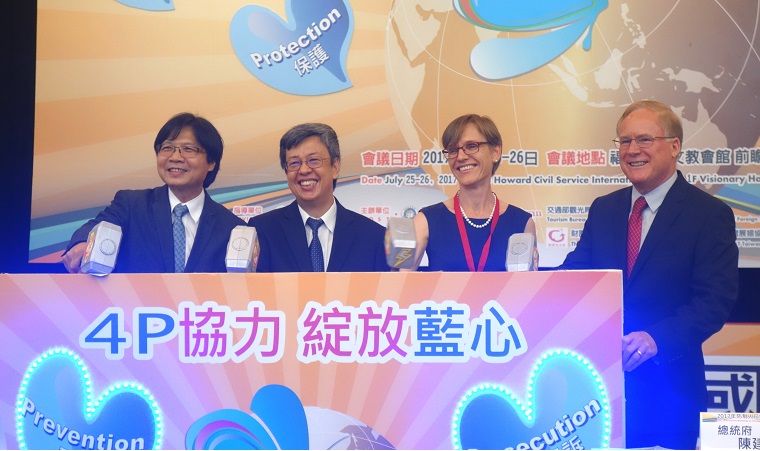 Good morning.  It is a privilege and an honor to be here today with Vice President Chen and Minister Ye and to welcome all of you who have worked tirelessly to combat trafficking in persons, to bring to justice those who profit from forced labor and sexual exploitation, and to protect and help those who are either victims or potential victims of trafficking.

Taiwan has been ranked “Tier 1” in the annual U.S. State Department Trafficking-in-Persons Report for eight years in a row, which is clear evidence of your tireless efforts.  Only 36 countries and areas worldwide were designated as “Tier One” in this year’s report and only five in the Asia-Pacific region, but few can claim to have sustained “Tier One” status for eight consecutive years as Taiwan has done.

Another example of Taiwan’s outstanding leadership in combatting trafficking in persons was this year’s selection of Allison Lee as a 2017 TIP Report Hero.  Ms. Lee is a co-founder and the Secretary General of the Yilan Migrant Fishermen Union, Taiwan’s first labor union composed of and led by foreign workers, and is a leading voice in demanding stronger protections for fishing crew members and accountability for human traffickers.

Ms. Lee was one of only eight individuals selected worldwide for this honor, a profile of Ms. Lee was included in the report itself, and Secretary Tillerson recognized Ms. Lee at a ceremony in Washington last month.  Let me again congratulate Ms. Lee and Taiwan for your excellent leadership on this most important issue.

Taiwan has become a model to the region and to the world in so many ways, and your proactive efforts to combat trafficking in persons and protect victims is another way in which Taiwan sets the global standard.  Many countries in the region now look to you as an example of how to improve their own efforts.  The United States is committed to working with Taiwan to enhance cooperation on anti-trafficking initiatives and to share Taiwan’s best practices with the rest of the region and the world.

You have also demonstrated serious and sustained efforts to prosecute traffickers with the Human Trafficking Prevention Act.  In 2016, Taiwan authorities conducted 134 trafficking investigations, including cases involving foreign fishermen, and convicted 56 traffickers.  At least one such trafficker was sentenced to five years in prison.  We are confident that Taiwan’s courts will continue to hand down tough sentences for these crimes in order to increase the deterrence effect.

While Taiwan has taken measures that have made a huge difference, let us not forget that estimates of the number of victims of human trafficking worldwide remain in the tens of millions, many of whom come from the Asia-Pacific region.  Every year an estimated 800,000 men, women, and children are trafficked across international borders worldwide, and criminals make an estimated $9.5 billion from the sale and exploitation of the victims.   Human traffickers often prey on those who seek a better life – whether it is a young girl lured away from her family only to be trapped in sexual slavery or an aspiring man who hopes to make a better wage to support his family only to find himself a victim of forced labor.

Despite increasing awareness of the problem, the estimated number of trafficking victims worldwide still far exceeds the numbers of prosecutions and convictions of those who perpetrate this crime.  Last year in the East Asia and Pacific region, nearly 10,000 victims of human trafficking were identified but only 1,953 traffickers were convicted.  The ratio of victims identified to traffickers convicted was similar in the Western Hemisphere region as well.  These figures represent a call for greater action and a more robust response to punish traffickers with criminal penalties as the Palermo Protocol recommends.  The abuse and exploitation of human beings for profit will remain a relatively low-risk enterprise until we raise the conviction rate.

So we must work harder.  We have to be innovative and join hands to battle the menace of trafficking.  To overcome resource constraints, government, corporate and NGO leaders must join hands to find new ways to combat trafficking.

Both the United States and Taiwan have taken important steps to fight trafficking, but much more needs to be done.  Neither of us can afford to be complacent.  In the United States, for example, we must increase our efforts to achieve more consistent, victim-centered implementation of anti-trafficking laws and policies, including increased efforts to ensure more trafficking victims have timely access to immigration relief.

In Taiwan, we know that you are focused on more vigorously investigating, and where appropriate, prosecuting the owners of Taiwan-owned or -flagged fishing vessels that commit abuse and labor trafficking onboard long haul fishing vessels.  We are pleased to see that tomorrow will feature a session on preventing exploitation of workers in the fishery industry.

As Secretary Tillerson recently said, “Human trafficking is one of the most tragic human rights issues of our time.  It splinters families, distorts global markets, undermines the rule of law, and spurs other transnational criminal activity.  It threatens public safety and national security.  But worst of all, the crime robs human beings of their freedom and their dignity.  That’s why we must pursue an end to the scourge of human trafficking.”

The promotion and protection of human rights is a core commitment that Taiwan and the United States share.  It shapes how we see the world and our roles in making it a better place.  We stand by Taiwan’s side, and beside all of you here today, committed to moving forward together. In conclusion, let me wish you all a very successful conference.  And keep up the great work!