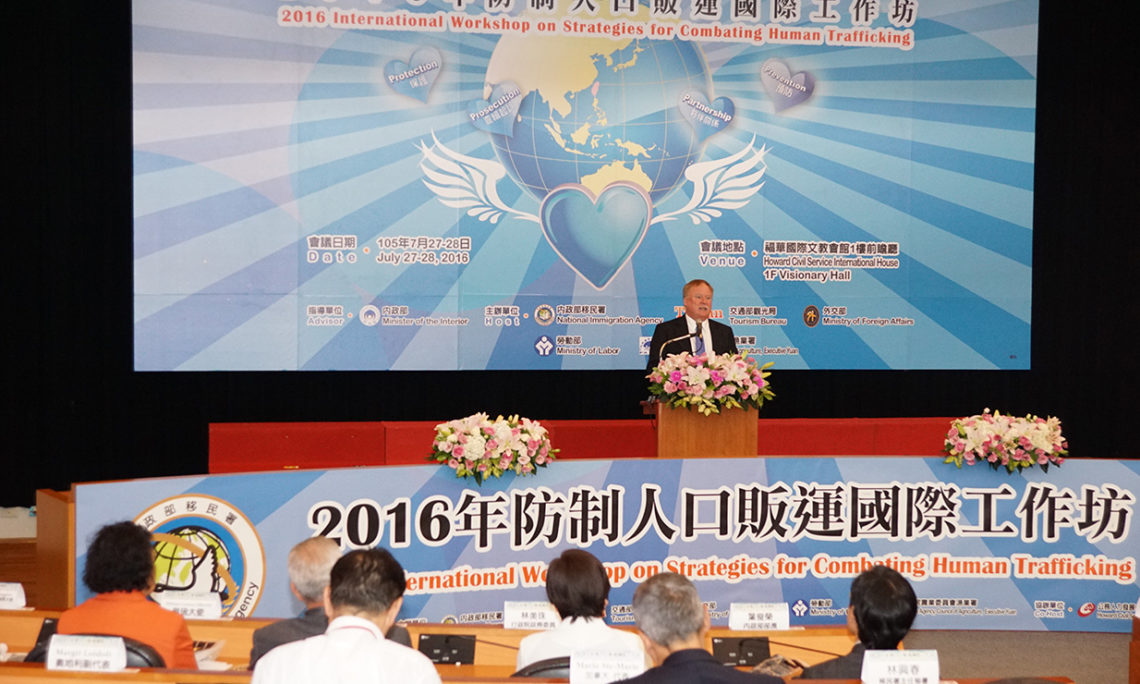 On behalf of the American Institute in Taiwan, I would like to express our thanks to Vice President Chen Chien-jen, Interior Minister Yeh Jiunn-rong, NIA Acting Director-General Ho Jung-Chun, Minister without Portfolio Lin Mei-chu, distinguished members of the diplomatic community, and the many other senior officials here today for their leadership in support of this workshop.

As President Barack Obama has said, the fight against human trafficking is one of the great human rights causes of our time. No place on earth is immune to human trafficking, which claims more than 20 million victims at any given time.

Although it does not necessarily involve the movement of people across borders, and there are numerous cases of people being exploited within their own societies, trafficking in persons is a transnational issue.

As we gather here today, there are countless criminal networks and individuals making billions of dollars by enslaving other human beings and forcing them to work or provide sexual services in exchange for little or no pay.

Trafficking is one of the largest criminal enterprises on earth, generating more than $150 billion a year in profit.

It is happening in every corner of the globe – in people’s homes, in factories, in hotels and restaurants, on farms, on fishing vessels; in countless places where one might not expect it.

It is a heinous but lucrative crime that exploits the most vulnerable among us.

Human trafficking does not respect borders.

We applaud Taiwan’s leadership in engaging regional and international partners in anti-trafficking efforts, and in sharing its own experiences and lessons learned in our global fight against human trafficking.

As one of only five places in the Asia-Pacific region to be placed on Tier One in the Department of State’s 2016 annual Trafficking in Persons Report – marking its seventh consecutive year – Taiwan stands out as a leader.

Human trafficking violates the most basic sense of our common humanity. It is therefore essential that like-minded partners around the globe coordinate our efforts to eliminate modern slavery.

The United States is proud to partner with Taiwan. Our shared respect for human rights, in tandem with our joint aspiration to develop into ever more just, equal, and humane societies has made us natural partners in the fight against trafficking in persons.

We are delighted to have with us today Susan Coppedge, Ambassador-at-Large to Monitor and Combat Trafficking in Persons and Senior Advisor to the Secretary of State.

Ambassador Coppedge’s participation in the workshop demonstrates how deeply the United States values our cooperation with Taiwan in combating human trafficking.

Now, I would conclude by reminding everyone that a Tier One ranking does not mean that everything is perfect or that we can become complacent.

The truth is that all governments – including the United States – can do more to combat human trafficking.

I hope this workshop will generate new ideas of ways in which all of us can work more effectively together to protect trafficking victims, prosecute traffickers, and prevent human trafficking.