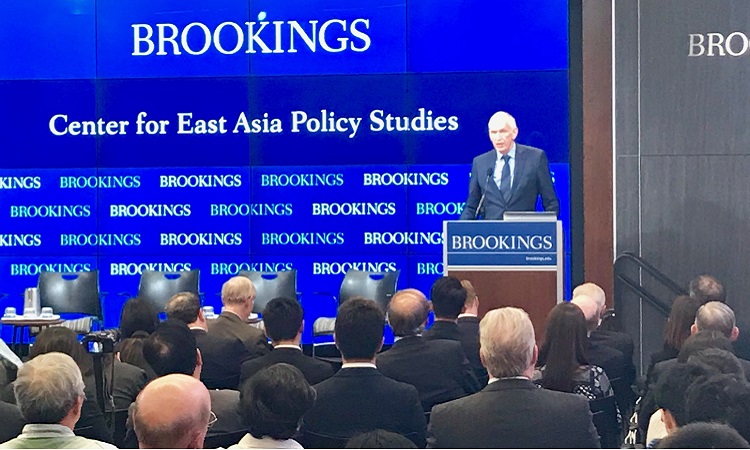 Richard, thank you for the kind introduction.  I’d like to again thank Richard for his strong leadership of AIT during his tenure as Chairman, which strengthened our Institute and enabled us to become better stewards of the important relationship between the United States and Taiwan.  Richard’s writings and commentary continue to educate those of us who are working on U.S.-Taiwan relations.

I also want to acknowledge Dave Brown, a valued member of our Board of Trustees, who has done so much to educate the next generation of international relations professionals on Taiwan and cross-Strait relations. I look forward to hearing both Richard and Dave’s thoughts during the panel discussion.

Before I dive in to U.S.-Taiwan relations, I’d like to provide the broader strategic framework that underpins this important bilateral relationship.

A few data points help illustrate the importance of Asia to the United States.  The percentage of Americans who say Asia is more important than Europe to U.S. interests jumped from 21 percent in 1994 to 52 percent in 2012.  We have five treaty allies in the region, which remain the bedrock of our engagement.  Five Asian economies – including Taiwan – are among our top twelve trading partners, while APEC economies purchase nearly 60 percent of U.S. goods exports.  We continue to bolster our alliances and build lasting partnerships across the region.

The authors of the Taiwan Relations Act had a keen understanding of the linkage between Taiwan’s security and that of the broader region.  The Act was written with an eye toward helping to – and I quote – “maintain peace, security, and stability in the Western Pacific.”  The Act asserts that peace and stability in the Western Pacific – again I quote – “are in the political, security, and economic interests of the United States, and are matters of international concern.”  Since its passage into law, every U.S. administration has reaffirmed the United States’ commitment to the TRA.

The TRA, along with the three joint U.S.-China communiques, remains the foundation for U.S. policy toward, and engagement with, Taiwan.  Through this framework, the United States and Taiwan have built a comprehensive, durable, and mutually beneficial partnership, grounded in our shared interests and values.

This is truly a long-term, enduring partnership.  Taiwan’s friends should take comfort in the fact that the discussion in Washington is not whether to deepen our relationship with Taiwan, but rather how best to do so.

A key reason why my U.S. government colleagues value U.S. ties with Taiwan is because Taiwan has shown itself to be a reliable partner on the United States’ most pressing security challenges – challenges which threaten not only America but the entire world.

First among those is North Korea, with its reckless pursuit of its nuclear and ballistic missile programs.  We thank Taiwan for its recent decision to go beyond the requirements of the UN sanctions in exerting pressure on the DPRK by banning all trade with North Korea.  As Secretary Tillerson has said, UN Security Council Resolutions represent the minimum of actions we expect the international community to take in putting pressure on North Korea.

Taiwan clearly stands in solidarity with our position and has set a valuable example for the international community by cutting off the trade flows that enable the North Korean regime to continue threatening international peace and security.

Taiwan is also a valued member of the global coalition to defeat ISIS.  To support this international effort, Taiwan has contributed money and supplies to help people who have had to flee their homes in Iraq and Syria.  AIT is currently working with Taiwan to finalize an additional contribution to support humanitarian survey and ordnance clearance operations in liberated cities.  The United States and Taiwan both recognize that violent extremism is a global challenge and requires a shared response by the international community.

More generally, Taiwan’s participation in the international community is vital precisely because Taiwan has shown time and time again both the will, and the ability, to play a positive role in addressing global problems.

The United States strives to help find new ways for Taiwan to expand its international space outside the traditional UN system.  For instance, under the Global Cooperation and Training Framework – or GCTF – we work with Taiwan to address global and regional concerns by leveraging Taiwan’s strengths and expertise in areas such as public health, and humanitarian assistance and disaster relief, to help improve the capabilities of others in the region.

We value our work together in the Asia-Pacific Economic Cooperation forum – or APEC –to advance women’s economic empowerment, energy, the digital economy, and other priorities.

We were also pleased that Representative Kao could attend the Community of Democracies Ministerial hosted by Secretary Tillerson in September.

While we work together to address regional and global problems, we should remember that cross-Strait stability is a necessary – if not sufficient – condition for broader regional prosperity and stability.  Thus, the United States has an abiding interest in cross-Strait peace and stability.

We believe a Taiwan that is secure, confident, and free from both isolation and coercion is better able to engage Beijing constructively.  Such engagement, in turn, supports a stable and peaceful cross-Strait environment.  That is why we work to expand Taiwan’s international space, build our economic ties, and maintain close security cooperation.

In the security realm, over the past decade, the United States has authorized the transfer to Taiwan of some of the most sophisticated weapons – weapons needed by Taiwan to maintain its self-defense capability.  In June, the Trump Administration notified to Congress $1.4 billion in arms sales to Taiwan, underscoring the U.S. vow to uphold its commitments under the Taiwan Relations Act.

At the same time, security relations with Taiwan are about much more than arms sales.  Taiwan’s key defense and military leaders have begun to understand the need to overhaul Taiwan’s security concept and embrace modern, asymmetric approaches and innovative ways to employ existing capabilities.  The United States supports this effort, and we are working with Taiwan to ensure the successful transformation of its defense concept.

For example, the Department of Defense is supporting Taiwan’s efforts to overhaul its reserve forces and enhance jointness among its military services.  These examples are emblematic of our continuing effort to fulfill both the letter and the spirit of the Taiwan Relations Act.

The United States will continue to make available to Taiwan defense articles and services necessary to enable Taiwan to maintain a sufficient self-defense capability.

This commitment is firm, but it alone will not secure Taiwan against the backdrop of an increasingly complex regional environment.  Taiwan must do its part to invest in capabilities that deter aggression and will help Taiwan mount an effective defense should deterrence fail.  While we commend Taiwan for the considerable strides it has made, it can and must do more as the security threat against it continues to evolve.

Taiwan’s defense spending simply has not kept pace with this changing environment, and it must address this situation with real urgency.  Taiwan is spending significantly less on defense as a percentage of GDP than others that face similarly sophisticated threats, such as Israel, South Korea, and Ukraine.  Taiwan can and must do better.

But let me be clear, Taiwan faces both security and economic challenges, and thus Taiwan’s continued economic security and vitality are equally important to the United States.  This is why we endeavor to deepen our economic ties.  U.S.-Taiwan economic ties are extensive, as we have grown to become each other’s tenth- and second-largest goods trading partners, respectively.

We continue to work through the process of the Trade and Investment Framework Agreement – or TIFA – to address trade issues and market access barriers facing U.S. companies and investors.  We are also actively identifying new opportunities for collaboration through our Digital Economy Forum, a venue for dialogue between our public and private sectors on a wide range of cooperative topics.

The U.S.-Taiwan economic relationship is strong but could be even stronger.  If Taiwan is to reinvigorate its economic growth, that will be done, in part, by pursuing through the TIFA mechanism the economic liberalization to which Taiwan has committed.  If we can successfully use bilateral mechanisms like the TIFA to resolve trade irritants between our two economies, that will help foster an even stronger and closer trade relationship.

I have had the honor of discussing our relationship with President Tsai – both in Taiwan and the United States.  I know that she deeply values this relationship, and will do her part to move it forward.

My interactions with President Tsai have reaffirmed my conviction that she is a responsible, pragmatic leader.  The United States appreciates her determination to maintain stable cross-Strait ties in the face of increasing pressure from the PRC on a number of fronts.

It’s clear that the cross-Strait relationship currently suffers from a lack of trust and communication.  The United States will continue to urge both sides to engage in constructive dialogue and to demonstrate patience, flexibility, and creativity in finding ways to engage with each other, in order to avoid miscalculation and resolve their differences.

The United States will continue to insist on the peaceful resolution of differences between the PRC and Taiwan in a manner that is acceptable to the people on both sides of the Strait.  There should be no unilateral attempts by either side to change the status quo.

After all, peaceful and stable cross-Strait relations not only serve the two sides of the Taiwan Strait but also the interests of the United States and the broader region.

The United States endeavors to improve our economic partnership, support Taiwan’s confidence and freedom from coercion, deepen the bonds of friendship between our people, and ensure that Taiwan can continue to make positive contributions to the international community.  The United States considers Taiwan a vital and reliable partner in Asia, one which merits our continuing support.

I began by noting Taiwan’s importance in a broader regional context, and so I’d like to close by returning to that theme.  The United States has an abiding interest in Taiwan’s security, and has built a comprehensive, long-term relationship with Taiwan within the framework of its broader Asia strategy.

The United States intends to remain steadfast in deepening these ties and upholding policies consistent with the TRA. To quote Secretary Mattis, “we will not use our allies and partners, or our relationship with them, or the capabilities integral to their security, as bargaining chips.”

I look forward to continuing to advance this important relationship.

You can get the complete audio from the Brookings.edu website below.