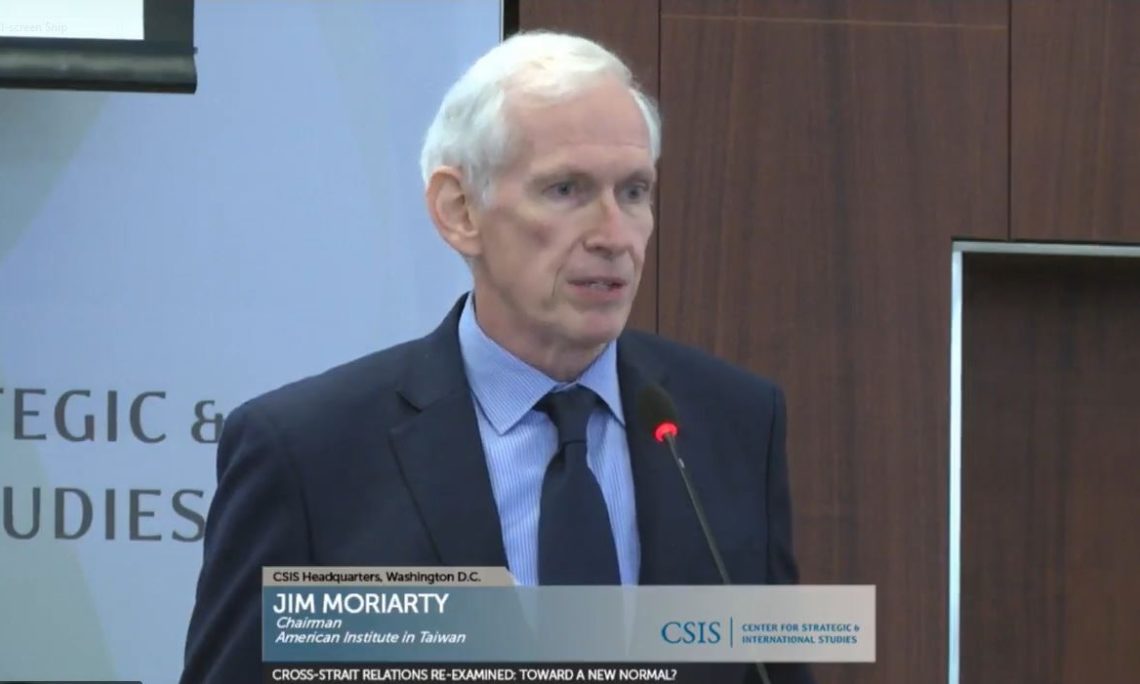 The United States and Taiwan have built a comprehensive, durable, and mutually beneficial partnership, grounded in our shared interests and values.  We maintain close economic, security, and people-to-people ties, and share a mutual respect for democracy and human rights.  It should be no surprise, then, that the United States considers Taiwan a vital and reliable partner in Asia.

The Taiwan Relations Act – or TRA – underpins our relationship with Taiwan.  The Act clearly reflects U.S. commitments with respect to Taiwan.  Chief among them is that the United States will maintain “commercial, cultural, and other relations” with the people on Taiwan.  When Taiwan is connected to the region through these kinds of relations, not only does Taiwan benefit, but so do the region and the world.

Secretary Tillerson recently reaffirmed that the United States is “completely committed” to the TRA and to “fulfilling all of our commitments to Taiwan” under the Act.  Let me provide some data points that illuminate the breadth and depth of this relationship, and demonstrate how we are translating Secretary Tillerson’s guidance into action.

On the economic front, the United States and Taiwan have grown to become each other’s tenth- and second-largest goods trading partners, respectively.  The stock of bilateral foreign direct investment between the United States and Taiwan exceeds $21 billion.  Taiwan is a top-twenty importer of U.S. services and a top purchaser of U.S. agricultural exports and intellectual property.

Last month, Taiwan sent its largest-ever delegation to SelectUSA.  Senior executives from many of Taiwan’s most prominent companies came to the United States, where they scouted out new investment opportunities that potentially could reach $34 billion.  Taiwan’s investments in the United States bring jobs and economic growth to communities across the country.

We continue to work through the Trade and Investment Framework Agreement – or TIFA – process to address trade issues and market access barriers facing U.S. companies and investors.  Last October I had the honor of chairing the 10th TIFA Council meeting, which featured a lively exchange on the full range of priority trade policy issues.  This hard work by the U.S. and Taiwan participants led to progress in the areas of Intellectual Property Rights protection, market access for pharmaceuticals, improvements in the investment regime, internal regulations on chemicals, and some areas of agricultural trade.

The United States firmly believes that – if reinvigorated economic growth is to be achieved through free and fair trade – it will be done, in part, by pursuing the sort of economic liberalization which we have encouraged through the TIFA mechanism.  If we can successfully use bilateral mechanisms like the TIFA to resolve trade irritants, Taiwan and the United States will be able to foster a stronger and closer economic relationship.  I firmly believe there is no better time than now for us to resolve our outstanding trade issues.

Moving to the security realm, consistent with the TRA and our one-China policy, the United States makes available to Taiwan defense articles and defense services in such quantity as may be necessary to enable Taiwan to maintain a sufficient self-defense capability.  Such defense sales to Taiwan are based on an assessment of Taiwan’s defense needs.  Our enduring interest in peace and security undergirds the U.S. policy of providing Taiwan with arms of a defensive character and maintaining our own capability to respond to coercion.  This policy facilitates stability across the Strait by giving Taipei the confidence needed to pursue constructive interactions with Beijing.

The TRA states that it is the policy of the United States – and I quote: “to consider any effort to determine the future of Taiwan by other than peaceful means, including by boycotts or embargoes, a threat to the peace and security of the Western Pacific area and of grave concern to the United States.”  It also asserts a U.S. policy to “maintain the capacity of the United States to resist any resort to force or other forms of coercion that would jeopardize the security, or the social or economic system, of the people on Taiwan.”  Simply put, the TRA highlights the closeness of our relationship with Taiwan by identifying Taiwan’s security as a political, economic, and security interest of the United States.

Over the past decade, we have authorized the transfer to Taiwan of some of our most sophisticated systems and platforms – systems and platforms that Taiwan needed in order to maintain its self-defense capability.  Last month, the Trump Administration notified to Congress $1.42 billion in arms sales to Taiwan.

At the same time, our security relations with Taiwan are about much more than arms sales.  The United States engages in a wide range of consultations and exchanges with Taiwan aimed at assisting Taiwan’s armed forces as they seek to maintain, train and equip a capable, effective self-defense capability.

Through our interactions, we see that Taiwan’s professional fighting forces, and their leadership, are modern, capable, and creative.  Their capabilities far surpass the sum of the technical systems they operate.  Taiwan is not only demonstrating innovative ways to employ existing systems, but is also increasingly developing advanced asymmetric capabilities indigenously.  I commend the leaders in Taiwan’s military and scientific communities who are at the forefront of these efforts.

The TRA has also helped foster the close cultural and people-to-people ties, which undergird our relationship with Taiwan.  Taiwan is the seventh-largest source of international students in the United States, sending over 21,000 students to the United States last year alone – more than Japan, Brazil, or the UK.  On a per-capita basis, Taiwan sends more people to study in the United States than India or the PRC.

The Fulbright Program recently celebrated 60 years of educational exchanges between the United States and Taiwan; from which over three thousand grantees have benefitted.  Over the past five years, the number of English Teaching Assistants in Taiwan has tripled.  Taiwan’s inclusion in the Visa Waiver Program in 2012 has led to an expansion of tourist and business travel from Taiwan, sustaining and generating jobs here in the United States.

Taiwan has shown it has the expertise and experience, as well as the desire, to help tackle regional and global issues.  When the United States asked the international community to provide assistance to West Africa in the wake of the Ebola outbreak, Taiwan answered the call.  Taiwan donated 100,000 sets of personal protective equipment and $1 million to meet the most urgent needs of stricken patients.  Taiwan is also a member of the Defeat-ISIS coalition, and donated money and supplies to help people who have had to flee their homes in Iraq and Syria.

The United States seeks to boost Taiwan’s participation in the international community precisely because Taiwan has shown time and time again both the will and ability to play a positive role in addressing global problems.  The United States will continue to support Taiwan’s membership in international organizations where statehood is not a requirement for membership, and its meaningful participation in international organizations where statehood is a requirement.  Our recent urging for the World Health Assembly to welcome Taiwan’s participation as an observer is an example of our efforts in this regard.

The United States also continues to help find new ways for Taiwan to earn the dignity and respect that its contributions to global challenges merit and that befit its democratic status.  For instance, under the Global Cooperation and Training Framework – or GCTF – we work with Taiwan to address global and regional concerns by leveraging Taiwan’s strengths and expertise.

Just last week, the GCTF held a workshop in Taipei on humanitarian assistance and disaster relief.  Through this training course, participants shared best practices in overall disaster management and discussed specific disaster relief topics.  In addition, in April the GCTF hosted a “Workshop on Lab Diagnosis of Mosquito-borne Diseases.”  I had the privilege, alongside Taiwan Vice President Chen and AIT Director Moy, to launch that workshop, which attracted 35 public health officials from 18 Asia-Pacific and Caribbean countries.  To date, GCTF has convened eight programs on Taiwan, on everything from public health and energy efficiency to women’s empowerment and e-commerce.  More than 100 officials and experts from countries throughout the Asia-Pacific region have participated.

Going beyond the Taiwan Relations Act, the mutual respect for democracy, human rights, and civil liberties also sustains the partnership between the United States and Taiwan.  Taiwan’s 2016 presidential election brought about its third peaceful transition of presidential power, the first transfer of power in its legislature, and the inauguration of its first female president.  Taiwan stands as a beacon of democracy in Asia, offering a compelling example not only for Asia, but for the world.

In the State Department’s recently-released Trafficking in Persons report, Taiwan maintained its Tier One status for the eighth consecutive year.  Taiwan’s Allison Lee was one of eight “Heroes” honored in the report for her work advocating for the rights of foreign fishermen working on Taiwan-flagged vessels.  The U.S. commitment to Taiwan has thus become based not only on our enduring national interests but also on our shared values.  Cynics may discount the role of common purpose and shared values in the realm of international affairs, but there is no question that these are crucial elements of our commitment to Taiwan as well as to our allies in the region and around the globe.

Over the last 38 years, U.S.-Taiwan relations have deepened and expanded in impressive fashion.  When the TRA was passed, I don’t think that even the most optimistic observer could have foreseen this evolution of our ties.  The United States intends to remain steadfast in deepening these ties and upholding policies consistent with the TRA. To quote Secretary Mattis, “we will not use our allies and partners, or our relationship with them, or the capabilities integral to their security, as bargaining chips.”

The United States endeavors to improve our economic partnership, support Taiwan’s confidence and freedom from coercion, deepen the bonds of friendship between our people, and ensure that Taiwan has the ability to make positive contributions to the international community.  As a reliable partner, a force for good in the world, and a democratic success story, Taiwan continues to merit our support.  I look forward to doing my part in advancing this important relationship.