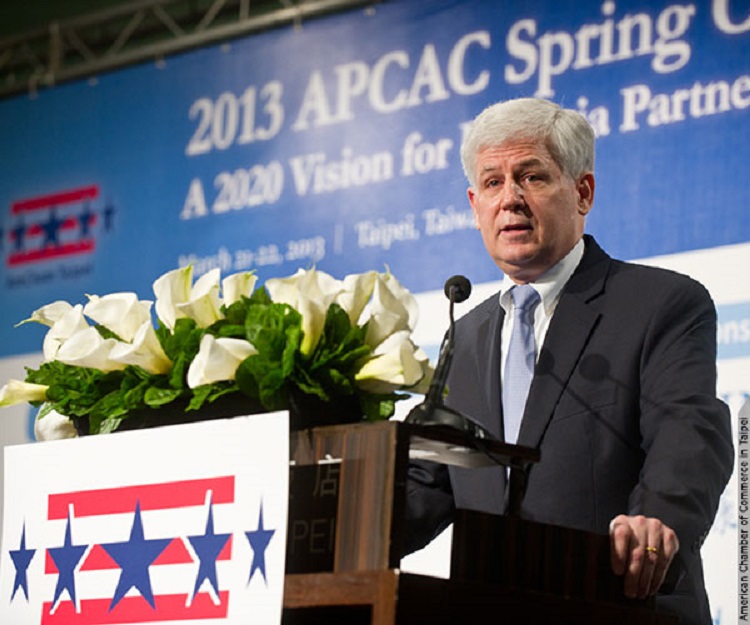 Alan:  Thank you for your kind introduction.

Good evening!  I’m very honored to speak on the occasion of AmCham Taipei’s Hsieh Nien Fan Dinner.  Of course, this year’s event is truly special as it brings together such a distinguished group of business and industry leaders for this annual meeting of the Asia Pacific Council of American Chambers of Commerce — APCAC.

I would like to extend a very special thank you to President Ma Ying-jeou for his strong support of the Chamber.  I also want to thank him for his ongoing, concerted efforts to strengthen the historically strong ties between the people of the United States and Taiwan.  Those ties are multidimensional, broad and deep; and at their core is a shared belief in democracy, human rights and rule of law.

President Ma, of course, just returned from Vatican City where he attended the investiture of Pope Francis….   Now think about that…..  He could have spent a few more days in Rome….maybe a brief vacation… some sightseeing.  But instead, he flew right back and is here with us to keynote tonight’s event.  That’s commitment.  Thank you Mr. President.

I’d also like to express AIT’s gratitude to Alan Eusden, Andrea Wu, the AmCham Board of Governors, and the entire team at AmCham-Taipei for organizing this conference.  It has been many months in the making.  Thank you for all your hard work to bring us together.

Tonight’s audience includes 20 American Chambers of Commerce and the U.S. Chamber of Commerce.  APCAC represents more than 10,000 business entities from 22 economies.  Your companies and business sectors drive much of the innovation, growth, and trade that have propelled the Asia-Pacific region to become the world’s economic powerhouse.

That success is in many ways driven by the principles and practices you espouse, the business prowess you possess, and the partnerships and networks you help build.

The theme of this year’s conference, “A 2020 vision for U.S.-Asia Partnership”, could not be more appropriate.  The issues you are discussing — trade, demographics, technology, innovation, environment, and energy — are critical subjects whose interaction will determine competitiveness, economic growth, and progress in the years ahead.

The Asia-Pacific region, which currently accounts for more than one quarter of global GDP, is likely to remain the powerhouse of the global economy.  Over the next several years, more than half of all growth outside of the United States market is expected to come from Asia.

Here at AIT, our work is also focused on the future — on economic growth and trade — and on jobs and opportunity for the American people.

We are very proud of last November’s inauguration of the visa waiver program for Taiwan.  The VWP, and Taiwan’s reciprocal granting of visa-free travel for United States passport holders, will expand commercial, cultural, tourism, and other people-to-people interaction.

We have a history of cooperating over two decades with Taiwan on environmental protection.  We have worked together on programs to make the air and water much cleaner, to combat mercury pollution, to manage e-waste disposal, and to explore carbon capture and sequestration options.  Through that cooperation, Taiwan has become a partner in regional capacity building.

Throughout the Asia-Pacific region, the Obama Administration has made a strategic effort to broaden and deepen engagement.  A key part of that effort is working with partners and allies to support democracy, good governance, and respect for human rights.

It is encouraging to see that in Taiwan’s vibrant open society, a serious and spirited debate is underway on what Taiwan needs to do in order to sustain its remarkable economic development.  That success has depended on the energy and ingenuity of its people and the far-sighted policies of its leadership.

President Ma laid out a vision a year-and-a-half ago for Taiwan under the “Golden Decade” concept.  Among other targets, it focused on Taiwan’s economy and relations in the region.

No one underestimates the difficulty of implementing reforms.  We all face constituencies for and against economic liberalization, but together we all must move forward if we want to realize our greatest potential.

In that spirit, tonight I would like to touch on three areas that are key to prosperity and growth in the Asia-Pacific region over the next decade: trade integration, energy security, and regional stability.

We are excited over the resumption of talks under the Trade and Investment Framework Agreement between Taiwan and the United States. This represents a new stage and provides fresh momentum in our economic relationship.  TIFA will more fully open up lines of communication on trade and investment.

The eleven countries currently negotiating the Trans-Pacific Partnership (TPP) — a high-standard, comprehensive, 21st century agreement — are bringing us closer to realizing a Free Trade Area of the Asia-Pacific.

And last fall, President Obama launched the Expanded Economic Engagement Initiative (E3i) as a means to maintain engagement with ASEAN as a whole and assist those members not in the TPP to prepare for future entry.

Robust growth in the Asia-Pacific region is driving demand for energy.  Part of the solution has to be expanding clean energy production.  Many initiatives for just that are right here on Taiwan.  As we strive to identify the best solutions for ensuring the adequate supply of energy, we must address climate change and the challenge posed by carbon emissions and the burning of fossil fuels.

Governments need to consider diverse policy options and market incentives that will lead to more efficient use of our energy resources.

Finally, economic growth and prosperity are inextricably linked to peace, security, and stability in the region.  The United States is a Pacific nation.  Our presence has played a major role in ensuring regional security and stability that have enabled and advanced economic integration, prosperity, and human development.  As a result, the region is now home to many of the key drivers of the global economy.  It is also increasingly central to transnational challenges like climate change, natural disasters, and nuclear nonproliferation.

Our third American President, Thomas Jefferson once called for “peace, commerce and honest friendship.”   I believe that this group embodies that sentiment.  The trade that takes place in the Asia-Pacific region underscores the gains from peace.  The commerce that your companies conduct in this region creates jobs, provides consumers with the best goods and services available in the world, and contributes to peace, security, and stability in the region.

President Obama re-phrased Jefferson’s comment in a modern context when he announced the U.S. “rebalance” to Asia in November 2011:

“A secure and peaceful Asia is the foundation for … advancing our shared prosperity.  History teaches us the greatest force the world has ever known for creating wealth and opportunity is free markets.  So we seek economies that are open and transparent.  We seek trade that is free and fair.  And we seek an open international economic system, where rules are clear and every nation plays by them.”

The futures of Asia and the United States are intertwined and mutually interdependent.  Of all the bets I can make about what the world will look like in 2020, the safest and easiest bet is that the United States and its partners in the Asia-Pacific will continue to forge even stronger political, strategic, economic, and people-to-people relationships.  Through our efforts, we can establish a cooperation model with benefits that reach far beyond the region.  Let’s keep this vision in mind as we move forward in this exciting period of a reinvigorated, U.S.-Asia relationship.

Thank you all for your efforts and for your commitment.

For our AmCham visitors from the region, I hope you will find time to enjoy the wonderful sights and culture of Taiwan.

And thank you for the opportunity to share these thoughts with you tonight.