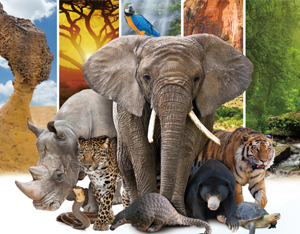 It is my great pleasure to be with you this morning for the opening of this counter-wildlife trafficking technical workshop.  We could not pick a better location than the wonderful Taipei Zoo, which protects and showcases many of the animal species that today’s training workshop will focus on.  The magnificent creatures that inhabit this zoo are a reminder to all of us of why it is so important that the international community respond to the global problem of wildlife trafficking.

The Taipei Zoo is home to some of the most threatened animals on the planet.  Global demand for wildlife products like ivory, horns, and animal skins has pushed species like elephants, rhinos, and tigers to the brink of extinction.  Wildlife poachers have slaughtered an estimated 100,000 elephants over the past decade.  The global tiger population has plummeted from over 100,000 a century ago to fewer than 4,000 today.  While the international community rightly expresses outrage over crimes committed against these majestic and charismatic creatures, we often overlook the damage caused by trafficking in lesser-known species.  Here in Taiwan, for example, there is significant trafficking in endemic species like the turtles, pangolins, and even certain kinds of rare trees.

Wildlife trafficking is by nature a transnational crime, and only a broad international effort will put an end to it.  The United States has taken action to improve our own standing with respect to monitoring and enforcement.  President Obama signed an Executive Order on July 1, 2013 directing U.S. government agencies to take steps to combat wildlife trafficking at home and abroad and imposing sweeping new restrictions on importing ivory and other wildlife products.  These new measures are making a difference, but we need to do much more, including with like-minded partners such as Taiwan, to address fully this global problem.

I’m pleased to welcome to Taiwan my colleagues from the U.S. Department of Interior’s Fish and Wildlife Service and U.S. Department of Homeland Security for today’s workshop.  The participation of these U.S.-based experts, one of our Homeland Security Investigations attachés based in Hong Kong, and our one of our regional U.S. Fish and Wildlife attachés, who recently arrived in Beijing, demonstrates the breadth and seriousness of the U.S. effort to address international wildlife trafficking.

Taiwan has made great strides in combatting the trade of protected species, and we’re pleased to see representatives of so many Taiwan agencies here today in the same room to exchange best practices on law enforcement techniques aimed at stopping the illegal wildlife trade.

I would like to express my deep appreciation to Taiwan’s Council of Agriculture Forestry Bureau for its strong support of today’s program.  I would also like to thank the NGO TRAFFIC, which played a key role in organizing the event.

I would also like to take this opportunity to announce another exciting collaboration between the American Institute in Taiwan, Taiwan’s Forestry Bureau, and other partners.  In 2014, AIT partnered with six of Taiwan’s leading museums to launch the “Culture and Conservation” campaign, in which we designed and placed posters in museums around Taiwan that urged visitors not to purchase illegal wildlife products.  These museums, which house some of the greatest collections of art, science, and culture in the world, draw millions of visitors every year. AIT is delighted to partner with them, and now also with the Forestry Bureau and the Taipei Zoo, to combat wildlife trafficking.

I’m pleased to announce today that in cooperation with Taiwan Forestry Bureau and our museum partners we are expanding the “Culture and Conservation” program with this new poster which will be placed in Taiwan’s magnificent National Forests, parks, museums, and other tourist destinations around the island.  Like its museums, Taiwan’s forests and parks also draw millions of visitors each year, and they happen to be home to some of the very species we are trying to protect.

I’m sure this new program will raise public awareness about the problem of wildlife trafficking.  Our message is an important reminder to everyone that the root cause of wildlife trafficking is consumer demand.  If we can end the buying of illegal wildlife products, then we will be able to preserve these wonderful creatures so that they can bring joy and beauty to our future generations.

Thank you for your dedication.  Best wishes to all the participants for a very successful workshop.