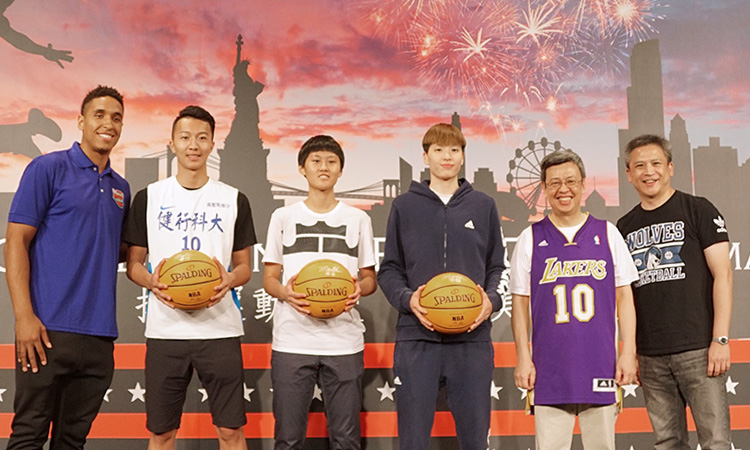 We are honored to have all of you with us today as we celebrate the 241st birthday of the United States of America.  As promised last year, I will keep my remarks short…and once again this year, we have a special guest to help us celebrate.  I’d also like to acknowledge the Taiwan athletes who have joined us today:  World No. 1 badminton player Tai Tzu Ying, Taiwan’s top golf player Teresa Lu, and the Taipei 2017 Summer University Games Mascot Bravo.

As you have seen around town, and in fact, here in this room, Taipei is going to have a very “sporty” summer with the University Games.  I’m delighted that Team USA will again participate in the games this year.

We chose a sports theme, and specifically basketball, for this event to not only celebrate the University Games, but to also represent America.  Many Americans spend their July 4 holiday with friends, and yes – there are BBQs and fireworks, and many also play a sport together.  Basketball was invented in the United States in 1891 and is now one of the most popular sports in America, in Taiwan and around the world.

In sports, as in life, you have to practice hard to play the game, and sometimes you make mistakes, sometimes you lose.  And if you’re a fan of the New York Knicks and the Minnesota Timberwolves, like I am, sometimes you lose a lot.  Teams and individuals quickly learn that success requires a lot of hard work first – and a lot of planning.

Last week we released a video on our Facebook site about participation in sports.  Many people wrote to me to strongly discourage me from quitting my day job.  But the video shows that we don’t have to be the best to have fun and enjoy sports.  Everyone can play – from the physically challenged to Olympic champions.  Men and women, young and old.

If you’ll allow me a couple of more sports metaphors – U.S.-Taiwan relations are like a team.  Have you all heard what TEAM stands for?  “Together Everyone Achieves More” and that is how I view our relationship.  We are stronger together.  The United States and Taiwan have shared values, shared prosperity, and shared security.  Here are just a few examples of our work in the past twelve months:

Taiwan is a valued partner of the United States that has made meaningful contributions to addressing regional and global challenges.  Thanks to Taiwan for our unprecedented level of cooperation to ensure that the University Games run smoothly.

Taiwan is also a source of innovation for the United States and the world.  The United States is delighted to partner with Taiwan on the Digital Economy Forum and at APEC where we are advancing a common agenda on trade.  We have also worked together under the Global Cooperation and Training Framework to train officials from around the Asia Pacific region on combating pandemic diseases and on humanitarian assistance and disaster relief.

We are also pleased that Taiwan is the seventh largest provider of foreign students to the United States.  I just came back from Washington where I heard universal praise of what a great partner Taiwan is.

Again, thank you for making this past year so great for AIT and the relationship between the United States and Taiwan.  It’s great to have a teammate like Taiwan!