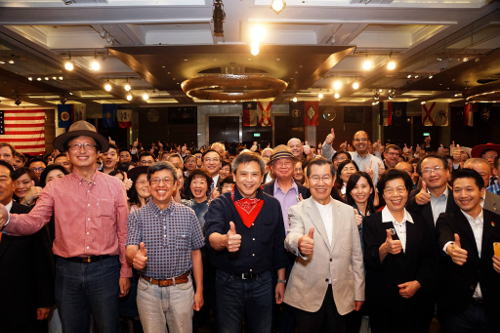 We are honored to have all of you with us today as we celebrate the 240th birthday of the United States of America. As you can see, this year, we chose a Western theme for this event. The spirit of the West is part of the legend of the United States. The early pioneers of the Western United States were not afraid of change. With great courage, they headed west in search of new opportunities and freedoms, working together to overcome adversity. Their sense of optimism, community, and adventure has become embedded in the fabric of life in America. Today, that same spirit lives on in America, whose innovation, entrepreneurship, and civic spirit keep American society and our economy thriving.

When I was in Washington recently to attend a conference of U.S. Ambassadors, President Obama came by to speak with us. One point that he made to us was very thought provoking. He said that no matter how grim the news sometimes seems, no matter how extraordinary the challenges that humanity or America seems to be facing, if you had to choose a moment in human history in which to be born, and you didn’t know ahead of time who you were going to be –- what your nationality was, or your gender, or race, or class -– if you had to pick one moment in history that gave you the best chance to succeed, you would choose right now. It’s because the world is wealthier, better educated, more open, more tolerant, more connected than it has ever been at any time in human history. Less violent. Less driven by division. You’d choose today.

I also feel that now is the best time in our history to work on U.S.-Taiwan relations. We simply cooperate in more areas and in greater depth than at any other time. I’ve said it many, many times, the United States and Taiwan have shared values, shared prosperity, and shared security. I have been here now one year. Here are just a few examples of our work in the past twelve months:

Last year, the United States maintained its position as Taiwan’s second largest trading partner and its number one source of foreign direct investment, and Taiwan is our ninth largest trading partner. Taiwan is also a source of innovation, as I saw first-hand last week when I led a delegation of 70 Taiwan business executives to the SelectUSA Investment Summit in Washington, D.C.

We also have strong security cooperation. You see this not only in the $1.8 billion arms sale package we notified to Congress last December, but also in the growth in exchanges between our two militaries. These sales and exchanges have helped Taiwan safeguard its own democracy.

These are not the only areas of cooperation. Taiwan is the seventh largest provider of foreign students to the United States. We cooperated in conferences to help combat global pandemics like Dengue Fever and the Zika virus, while helping to expand Taiwan’s international space. Again, thank you for making this past year so great for AIT.