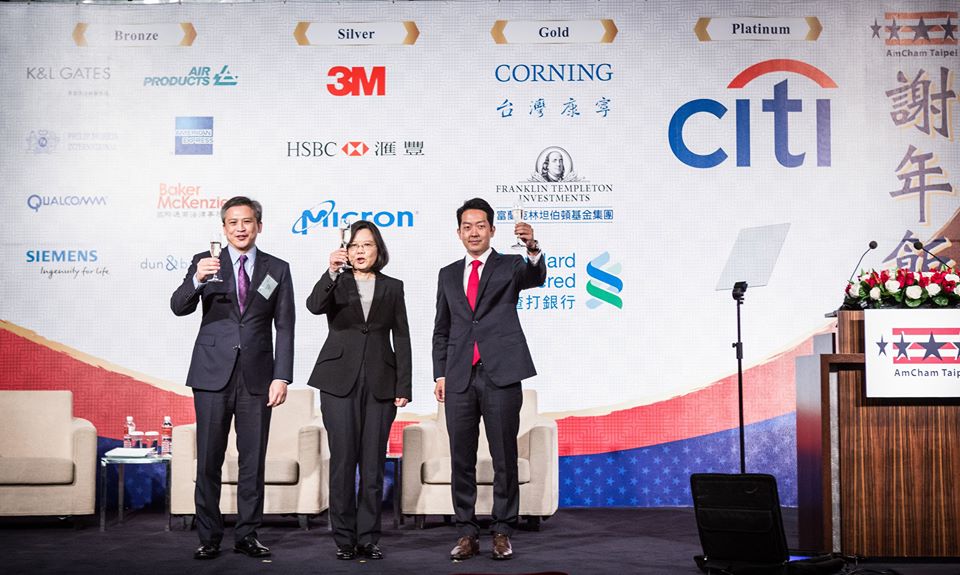 We are honored this evening by the presence of President Tsai and so many esteemed ministers. Their strong support for the U.S. business community is essential to what the United States and Taiwan are accomplishing together to promote trade, deepen investment, and broaden our economic cooperation.

Of course, we would not have the high level of economic cooperation we see today without the voices and acumen of an attentive U.S. business community. AmCham Taipei and its members play a leading role in identifying ways to increase trade and economic growth, including through the annual White Paper and Business Climate Survey. AIT is grateful for the productive cooperation we have with you.

In recent weeks, I have had the opportunity to talk to public and private sector leaders, including many in this room, about their hopes for the U.S.-Taiwan economic relationship under President Trump and President Tsai. One common theme stands out: there is tremendous enthusiasm for expanding trade and investment ties in ways that would bring mutual benefit, reinforce our shared values, and demonstrate renewed commitment to advancing our shared goals for the Asia-Pacific region. This enthusiasm, I believe, reflects the naturally strong and long-standing ties between our economies and our peoples.

The United States and Taiwan have grown to become each other’s tenth and second largest goods trading partner, respectively. Taiwan is a top-twenty importer of U.S. services and a top purchaser of U.S. agricultural exports and intellectual property. Taiwan’s investments in the United States bring jobs and economic growth to communities across the country, and we look forward to welcoming more investors from Taiwan at the SelectUSA Investment Summit in the Washington area this June. U.S. companies, for their part, choose to invest here in Taiwan because it complements their global strategies and enhances their competitiveness.

Cooperation on regional and global priorities has been and will remain a pillar of the U.S.- Taiwan relationship. We share similar views about the importance of a fair, open, efficient, and transparent trading system. Our cooperation in APEC is central in promoting these shared values, and we were proud to jointly announce at November’s APEC meetings in Lima a new sub-fund on women and the economy to improve women’s access to capital and training across the Asia-Pacific region.

Beyond APEC, we are extending our global reach through the Global Cooperation and Training Framework, which, in its third year, is bringing U.S. and Taiwan experts together to train public sector professionals from throughout the Asia-Pacific region. This year we are focusing on challenges such as global pandemic diseases, disaster relief, and bridging the digital divide, among other pressing issues. Our work through the International Environmental Partnership will continue, bringing our innovative environmental leadership to communities and youth all around the world. This joint program promotes awareness and problem-solving about air pollution, mercury monitoring, and electronic waste management.

Regarding our trade relationship, President Trump’s Trade Policy Agenda, recently released by the Office of the U.S. Trade Representative, calls attention to the stakeholders and issues that matter most to the U.S. economy: our businesses, our workers, a fair opportunity to compete, the need to eliminate trade barriers, and the pursuit of new trade agreements that are free and fair for all Americans. The Trade Policy Agenda notes that President Trump will take a new approach to trade issues and has begun consultations with Congress on how future trade agreements can work more effectively than in the past, to include potential bilateral talks with other economies. The Trade Policy Agenda continues to underscore that the U.S. administration will emphasize the enforcement of U.S. trade laws and the pursuit of open markets. Several concerns mentioned in the Trade Policy Agenda will resonate in Taiwan, such as the need for greater access to foreign markets, fairness in the international trading system, and respect for intellectual property rights, or IPR.

The United States and Taiwan, in fact, have already made joint efforts to address some of these concerns. IPR, for example, is one critical area where we have increased our coordination. I am pleased this evening to announce the signing of an AIT-TECRO memorandum of understanding on IPR enforcement cooperation that will help the United States and Taiwan respond to violations of intellectual property rights laws and trade fraud laws. The MOU demonstrates our shared recognition that our economies achieve the greatest prosperity when our innovators and creators can profit free from the threat of IP theft, and when commerce can flow protected from the damage inflicted by fraudulent and unfair trading practices.

We are also identifying new opportunities for collaboration through our Digital Economy Forum, a venue for dialogue between our public and private sectors on a wide range of topics from entrepreneurship and cybersecurity to cross-border technology licensing and smart cities. Development of the digital economy will be critical for growth in the 21st century. This is why AIT has encouraged Taiwan to be open to new approaches by companies in financial technology, the sharing economy, and private equity. These are just some of the tools that are essential to making the new economy work efficiently and productively.

Our ongoing dialogue in the Trade and Investment Framework Agreement, or TIFA, meetings will continue to shape our joint priorities in the coming year and will serve as a forum for discussing areas of concern in our trade and investment relationship. We welcomed progress at the October 2016 TIFA in areas such as IPR, patents, and pharmaceuticals but also noted the need to work harder in other areas, especially in the areas of agricultural trade and investment. The United States looks forward to continuing these important conversations in the coming months and working toward concrete progress that can help drive our economic relationship forward in the 21st century.

The policies and efforts I have described exist against the backdrop of a consistent and long-standing U.S. policy approach to Taiwan. The United States remains firmly committed to Taiwan’s security and a one-China policy based on the Taiwan Relations Act and the Three Joint Communiques. We seek a peaceful cross-Strait relationship and believe in the importance of cross-Strait dialogue in achieving it. We seek to expand our economic and cultural cooperation with Taiwan, and are already doing so by continuing our work through the TIFA, the Global Cooperation and Training Framework, the International Environmental Partnership, the Digital Economy Forum, and other venues, all of which help the United States and Taiwan promote our shared values regionally and internationally. I also proudly note that this year we celebrate the 60th anniversary of Fulbright Taiwan as well as Taiwan’s fifth year in the Visa Waiver Program, both of which have brought our people closer together.

So, in closing, as we celebrate and build on our earlier successes, AIT looks forward to creating new opportunities with Taiwan, AmCham Taipei, and all our friends and partners here. Thank you.