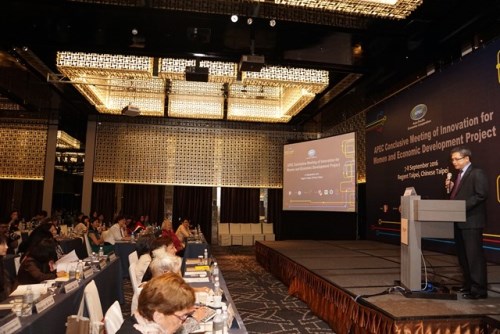 I feel honored to be in the company of such impressive leaders from government, business, civil society, and academia working to unleash the tremendous – and in large part untapped – potential of women in APEC economies.

I’d like to thank the Department of Gender Equality and Ministry of Labor’s Workforce Development Agency for co-hosting today’s event, as well as the Foundation for Women’s Rights Promotion and Development for organizing the event.

We applaud Taiwan’s leadership in advancing the economic integration of women in the APEC region and beyond, not only through the Policy Partnership on Women and the Economy (PPWE), but also through other avenues of engagement, such as the women’s empowerment workshop hosted earlier this year for women leaders from around the region.

As U.S. Secretary of State John Kerry has said, no economy can thrive if women are denied a seat at the table. Increasingly, people without access to technology are cut off from economic opportunities. As we have seen time and again, this problem disproportionately affects women, impeding their ability to obtain much-needed information, training, and mentorship; to access capital and markets; to establish networks; and to start businesses. The world cannot afford the lost opportunities for economic growth and development caused by the gender gap in access to mobile phones, the Internet, and other vital technologies.

It is only fitting that Taiwan, as a world leader in information and communication technology, led this three-year Project on Innovation for Women and Economic Development. Taiwan is also a leader on women’s empowerment, one of many shared values that we are working together to promote through the U.S.-Taiwan Global Cooperation and Training Framework.

It is an honor to stand on the same stage as the impressive speakers who have traveled from near and far to be here today.

As our first U.S. Ambassador for Global Women’s Issues, my former colleague Ambassador Melanne Verveer worked tirelessly to cement women’s rights as an integral part of U.S. foreign policy. PPWE is just one of many examples of her lasting legacy.

We also look forward to hearing from Under Secretary Nora Terrado and former Minister Jaclyn Tsai about their impressive work connecting government, business, and IT to promote women’s economic participation.