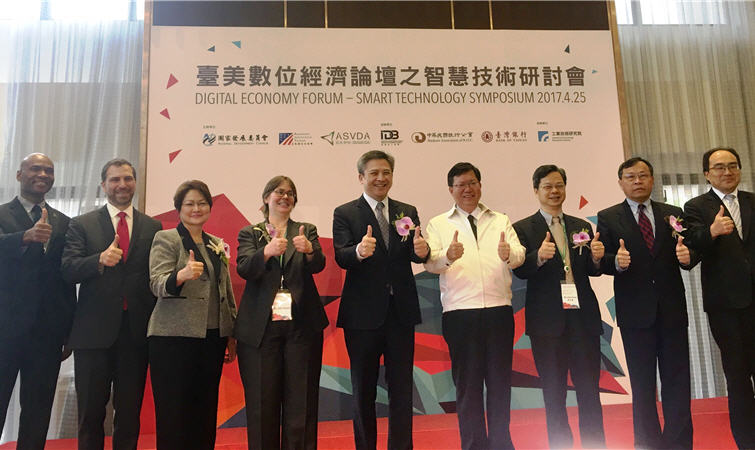 It is a pleasure for me to be here today at such a large gathering. One cannot help but feel we are at the beginning of something truly great as the United States and Taiwan work together to develop the digital economy in general, and smart technologies in particular.

The United States and Taiwan have long had a robust relationship in the high-technology sector. Taiwan is a global leader in semi-conductors and computer hardware and home to some of the world’s most successful technology firms. Taiwan forms an integral part of the global information and communication technology supply chain for virtually all of the United States’ top technology companies.

In 2015 the American Institute in Taiwan (AIT) and the Taipei Economic and Cultural Representative Office (TECRO) launched the Digital Economy Forum to build upon our historical cooperation in the high-tech sector. In 2015, and again in 2016, the two sides held a high-level, interagency dialogue to discuss digital economy developments and map out a strategy for how to deepen cooperation.

The Digital Economy Forum serves as a framework for cooperation on the digital economy in several areas.

In the field of digital trade and investment, we work to expand e-commerce cooperation and create a favorable policy and regulatory environment for digital innovation.

With respect to start-ups, the overarching goal is to better integrate the start-up eco-systems between our two economies. We do this through outreach to start-up entrepreneurs on working in the United States, by facilitating the licensing of U.S. technology to Taiwan start-ups, by promoting the sharing of best practices, and by encouraging active participation in the Global Entrepreneurship Network.

The United States and Taiwan also work closely together and around the world to bridge the digital divide, empower women digital entrepreneurs in Southeast Asia, and advance an open digital economy in APEC. In this regard, I want to congratulate Taiwan’s Dr. Morris Lin of the Ministry of Transportation and Communication who was recently named to serve as Chair of the APEC Telecommunication and Information Working Group. We look forward to working closely together to advance our common digital agenda.

The United States, home to Silicon Valley and so many other centers of innovation, and Taiwan, with its Asia Silicon Valley Development Agency, can both benefit from this growth, and we can do so together.

Today we will be launching the Smart Technologies Working Group, a platform which brings together public and private sector leaders from both the United States and Taiwan charged with carrying forward our cooperation on smart technologies.

In particular, the United States and Taiwan are working closely on promoting the development of smart cities. I understand the Taiwan authorities aim to send a large delegation of city and industry leaders to Washington, D.C. this August to participate in the Global City Teams Challenge, a collaborative platform that brings together the public and private sector to work on groundbreaking Internet of Things applications within the smart city environment.

Already, Taipei and Taichung are participating in this challenge, and we look forward to helping more Taiwan cities join this important initiative. The mastermind behind this program, Dr. Sokwoo Rhee from the U.S. Department of Commerce, will be speaking to you about this later this morning.

I hope today’s Symposium will help our two digital economies grow closer together. Let’s face it, when you look at the world today it is clear digital industries and smart technologies are the real growth engines of the global economy. It is up to all of us in this room to identify how we can work together so that we can make the world a “smarter” place!