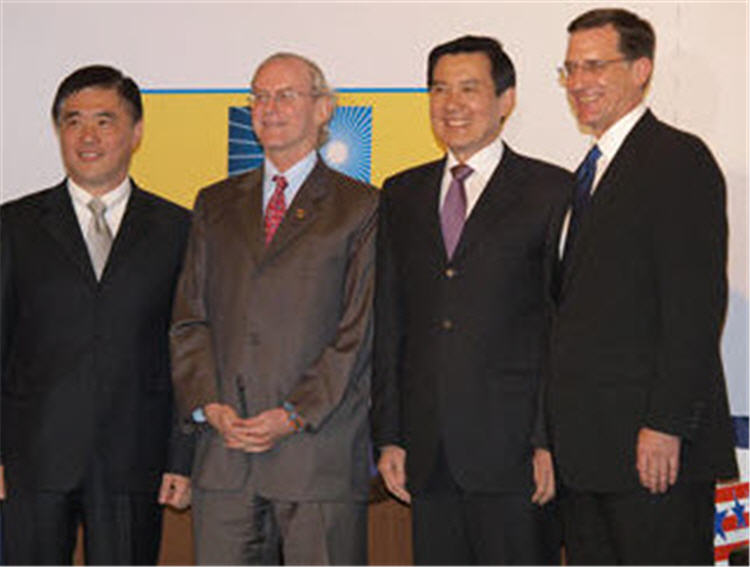 It is a real pleasure to be here among friends, and it is an honor to thank you for the openness and cooperation that characterizes the interactions between us.  This is why Taiwan is such an excellent place to do business.  It is also key to keeping Taiwan competitive as it weathers the current economic downturn that affects us all.

President Ma, Mayor Hau:  I’m not sure you realize how many accomplished athletes and particularly bikers, are here tonight in the audience.  On behalf of all my fellow bikers, I want to thank both of you for your sustained efforts to create safe lanes and bike paths for us around Taipei.  I have just one request of you tonight:  Is there anything you can do to persuade Taiwan motorcyclists and taxi cabs to stop trying to get as close to us as humanly possible as they fly by and we struggle to avoid becoming road kill?

On a more serious note, in this year of so many grim economic tidings, let me begin with the positive.  I would like to note three major achievements over the past year of which Taiwan can be proud.  These are:

GPA –In December last year, Taiwan completed its negotiations to accede to the WTO’s GPA.  When it finally accedes, Taiwan will have fulfilled a commitment it made when it joined the WTO in 2002.  Why is this important?  Upon accession, Taiwan will gain access to the government procurement markets of the U.S. and 39 other member economies.  This represents an enormous opportunity for Taiwan firms.  The U.S. Federal government procurement market alone amounts to more than 700 billion US dollars. It also is important to U.S. and foreign firms — including many Amcham members — given infrastructure spending in Taiwan, especially as the “Ai-Taiwan” projects are launched.

It means that Taiwan has earned membership in another international trade body and can help shape its future.  This is yet another sign that Taiwan is an active contributor to the international community.  We look forward to the Legislative Yuan quickly ratifying the agreement.

IPR –In recent years, Taiwan has made significant improvements in its intellectual property rights regime.  Recognizing this fact, in January, the U.S. removed Taiwan from the Special 301 Watch List.  Taiwan has strengthened its enforcement and its laws, established a specialized Intellectual Property Court, and demonstrated a commitment to becoming a haven for innovation and creativity.

This is a credit to the hard work done by Taiwan, as well as to our close bilateral cooperation.  Taiwan’s Intellectual Property Office under the Ministry of Economic Affairs has worked hard to make this happen.  The Ministry of Education, the Intellectual Property Police, the Judicial Yuan, and Taiwan’s prosecutors have also helped strengthen Taiwan’s IPR regime.  Amcham’s IPR Committee successfully worked on this issue for years.

We recognize there is still work to be done.  We urge the Legislative Yuan to act quickly to pass important legislation governing Internet Service Provider liability, and we encourage the Ministry of Education to continue its good work on implementing a campus IPR action plan.

But today, let me simply congratulate all of you on this remarkable achievement.  Taiwan, Japan and Singapore, are the only three major economies in Asia to achieve this result.  You are setting the standard for other Asian economies to follow.

Cross-Strait –Cross-Strait relations is another area where Taiwan has made remarkable progress in recent months.  You know what I am talking about – we can now fly directly between Taiwan and Beijing or Shanghai.  The mail now goes directly, we can actually exchange Taiwan dollars for Renminbi, and the barriers which limit people-to-people exchanges and business activity are beginning to come down.

Let me be clear:   the U.S. fully supports and applauds Taiwan’s efforts to enhance cooperation and lower tensions in the cross-Strait region.  We know such process will lead to real economic benefits for both sides.  This is indeed a major achievement.  I am confident that democratic Taiwan will continue the open discussion about next steps in cross-strait relations as this process continues to unfold.

As we all recognize, these past few months have been very challenging economically.  Business people and government officials around the world have been grappling with how best to deal with the difficult economic environment.  This challenge goes beyond the theoretical.

Companies have been making difficult decisions as they try to protect their clients, stockholders, and workers.

President Ma’s administration has implemented a number of measures to stimulate the economy, support business, and create jobs.  I’m curious – are Amcham Members planning to pay for tonight’s event with consumer vouchers?

In the U.S., President Obama signed the largest stimulus package the world has ever seen.  The new team in Washington is working hard to get the economy moving again, well aware of how closely the rest of the world is watching.  I think it is worth noting, in connection with some concerns out here, that President Obama has emphasized the importance of avoiding protectionism in responding to the economic crisis.  We are all in this together, and, ultimately, protectionism will hurt everyone.

While we are trying to mitigate the effects of the crisis right now, it is also important that we look beyond it.  Even as analysts debate how long the current downturn will last, there is no doubt that it will eventually pass.  Taiwan, the U.S., and our companies need to be ready.

Looking forward, there is still much to do.  The U.S. will continue to work with Taiwan to make progress on important bilateral issues.  We have been encouraged by positive signs on beef market access and hope that early in this Year of the Ox Taiwan consumers will once again be able to enjoy delicious, and safe, bone-in U.S. beef when the market is fully re-opened to our products.   We also hope that Taiwan can set policies and standards for pork, rice and other agricultural imports based on solid science and in harmony with international standards, such as those set by organizations like WTO, OIE,  and Codex.

With a trade relationship as multi-faceted as ours, there is always a long list of bilateral issues to discuss.  Resolving these issues will make Taiwan’s firms more competitive and make Taiwan an even better place to do business.

One such issue is the setting of safety and other standards for a number of products.  If Taiwan defines standards that, in effect, bar U.S. products which already meet or exceed international standards, it prevents U.S. firms from participating in the Taiwan market.  It also denies Taiwan consumers the opportunity to purchase safe, quality U.S. goods widely available in the U.S.  In the past few months we have seen cases ranging from ceiling tiles to fire engines that collectively could add up to hundreds of millions of dollars in lost trade.

Another issue is pharmaceutical pricing.  While we have been pleased that Taiwan officials have shown a willingness to discuss this with industry, progress on the issue is important to guarantee that Taiwan patients get the best treatment available and that U.S. firms receive fair prices for their innovative products.

Beyond our bilateral issues, Taiwan and the United States have the opportunity to work together on issues of global concern, namely climate change and clean energy.  Both President Obama and Secretary of State Clinton have already highlighted America’s commitment to lead on these important issues.  Taiwan, with its tremendous assets in research and development and a track record on environmental initiatives, is uniquely placed to contribute to solving these global problems.  Taiwan has already committed to reducing carbon emissions to 2008 levels by 2016.  Taiwan is not simply tilting at windmills:  It is actively pursuing alternative energy solutions such as wind and solar power.

Taiwan and the U.S. already cooperate on a variety of environmental and technology initiatives.  To cite just one example, Taiwan is cleaning up its ports and reducing air and marine pollution through a cooperative program with the U.S. Environmental Protection Agency and the Ports of Seattle and Tacoma.  This program could be a model for other ports in the region.

Environmental protection isn’t just a matter of good policy, it’s good business, too.  Terry Gou understands this, as evidenced by the partnership he announced yesterday between Hon Hai and IBM to produce sophisticated carbon sensors.

Now I know that Taiwan has its own list of priorities for our relationship, and we look forward to discussing them in detail in the coming months.

I have just returned from Washington where our new administration is quickly getting up to speed.   Even as the administration is in the process of filling key positions, it is already clear that Asia will be an increasingly important focus of U.S. policy and attention. Secretary Clinton making her first overseas trip to Asia sends a strong signal. She is the first Secretary of State to do so since Dean Rusk in the early 1960s.   During her trip she called America relationships across the Pacific “indispensible to addressing the challenges and seizing the opportunities of the 21st century.”

While in DC, I had the opportunity to meet with key players in the State Department, White House, Defense, USTR, the Department of Agriculture and on the Hill about Taiwan and how it fits into our broader foreign policy.  I was struck by how much interest there is in this island, its cross-strait initiatives, its democratic development, and its current economic situation.  As I have said before, you have a lot of good friends assuming senior responsibilities in the Obama administration, and they care about this place a great deal.  There is particular concern about how the global economic downturn is affecting Taiwan, and a desire to work with you wherever possible, as we focus on strategies aimed at reversing the negative regional and global trends affecting trade, investment and consumer confidence.  The new team recognizes the critical contribution you make to the global supply chain and thus how much the current slump in international trade has affected this island.  This only underscores the point I made earlier, that we are all in this together, and need to work toward common solutions that raise up all of our economies in the challenging months ahead.

This spring marks the 30th anniversary of the Taiwan Relations Act, which has successfully helped the people of Taiwan to prosper over those many years and helped to guarantee stability for Taiwan and the region.  Secretary Clinton, en route to Asia, reaffirmed the basic framework of U.S. policy with respect to Taiwan would not change in the current administration:   It remains based on our One China policy, the three communiques and the Taiwan Relations Act, which governs all aspects of our informal relations with Taiwan, including security assistance.  In fact, it is fair to say that AIT is the direct offspring of the TRA.  So — perhaps somewhat selfishly — as AIT’s tenth Director I believe its success over the past three decades is worth celebrating.

In closing, let me once again thank President Ma and all of the Taiwan officials who have worked so hard to build our bilateral relationship and to keep open lines of communication with U.S. business.  I’d also like to thank Amcham, both members and staff, for all that you do.  Your annual white paper, door knocks, committees, and active advocacy for a strong U.S.-Taiwan relationship have made an enormous contribution.

There is much to be done in the coming year, and my colleagues here in AIT and Washington look forward to working closely with Amcham and our local Taiwan partners on our shared agenda.  So let’s celebrate all that tonight, and be ready to get back to work starting tomorrow.  Thank you!