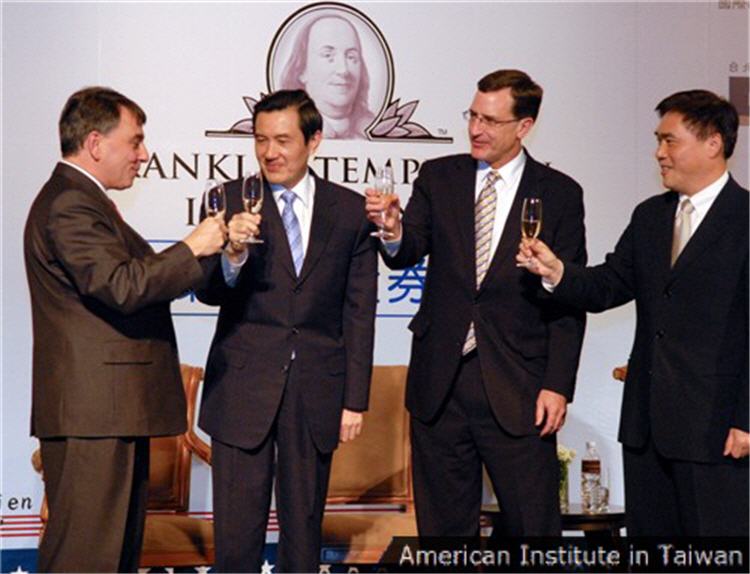 Alan, thank you for your kind introduction. I am very honored to take part in this evening’s Hsieh-Nien-Fan — a great Taipei tradition — and would like to express AIT’s appreciation for AmCham’s many years of dedicated support for building a stronger U.S.-Taiwan economic relationship.

As farmers, poets, lovers and everyone else has done since seasons were first noticed, we are celebrating springtime and the dawn of a new year.  Spring, that time of year, when, as the great English poet A.E. Housman wrote,

“Loveliest of trees, the cherry now

Is hung with bloom along the bough.”

After our year-long winter of recession, Taiwan’s economy is also blooming once again, and all the more appreciated after what we’ve been through.  As the first notable American poet Anne Bradstreet observed:  “If we had no winter, the spring would not be so pleasant; if we did not sometimes taste of adversity, prosperity would not be so welcome.”

This year, Taiwan’s GDP is forecast to grow by 4.72%, an impressive rate for a mature economy.  The U.S. economy is also turning around, with 5.9% GDP growth in the most recent quarter.

You may be thinking — as a Scottish author once said:  “He uses statistics as a drunken man uses lampposts — for support rather than illumination.”   Well, statistics may not tell the whole story, but I think it’s still safe to say that a recovery is here.

This recovery didn’t happen by accident.  Despite the worst recession in recent history, the U.S. and Taiwan stood by what made us successful in the first place:  hard work, and a commitment to open trade and free enterprise.  Through the decades, Taiwan has emerged as a model of both development and democracy.  During tough times, I know there can be a tendency to look inward.  But as some of you heard in the terrific speech Thomas Friedman delivered during his January visit to Taipei, the world is indeed “flat.”  We are all increasingly interdependent.   No country, economy, or region can afford to go it alone.

The U.S. has worked to resist protectionism.  Taiwan should continue to do so as well. Rather than retreat into parochial concerns, we must continue to embrace the traits that brought us where we are today.  Openness to the world has always been a recipe for strength.  As Benjamin Franklin said, “No nation was ever ruined by trade.”

I have to confess, however, that I have sometimes almost felt ruined by a trade issue!  I’m talking about beef, of course.  I cannot hide our frustration that some in Taiwan valued short-term, political concerns over scientific evidence and free trade principles.  Washington is still considering options for reaching the ultimate goal of fully implementing our beef protocol.  At the same time, we are greatly encouraged by the opening of Taiwan’s market to many more bone-in beef products, enabling Taiwan diners to enjoy the same beef as their friends in the U.S.  The progress we have made so far is a testament to the words of Henry David Thoreau:  “Trade and commerce, if they were not made of India rubber, would never manage to bounce over the obstacles which legislators are continually putting in their way.”

Nonetheless, our trade relationship with Taiwan is too big, and too important, to be dominated by a single issue.  Last year, Taiwan was our tenth-largest trading partner.  The U.S. conducts more trade with Taiwan than with India or Brazil.  At AIT’s offices in Taipei and Kaohsiung, we have a total of 55 American and local staff working on economic, commercial, and agricultural issues.  Of course, in a relationship of that scale, we’re bound to have some problems.  Our ties, however, are strong enough to absorb the blows.  As a popular U.S. saying goes, “A simple friend thinks the friendship is over when you have an argument.  A real friend knows that it’s not a friendship until after you’ve had a fight.”

The United States greatly values our relationship with Taiwan.  The American people and the people of Taiwan share an historic friendship that has spanned 60 years.  Every day, our vibrant people-to-people exchanges build on that friendship.  Last year, the U.S. hosted over 28,000 students from Taiwan, our 6th-largest source of foreign students.  46,000 U.S. citizens live in Taiwan, and each year, 412,000 Americans visit this beautiful island.  These and other personal ties build a friendship based on common interests and shared values, including our commitments to democracy, human rights, rule of law, and free markets.

The enormous two-way flow of travelers between Taiwan and the United States is a key element of these strong personal ties between our two peoples.  We recognize, and I personally strongly support, Taiwan’s interest in joining our visa waiver program.  Although Taiwan does not meet the requirements for the program at present, there are security measures Taiwan can adopt to bring it closer to eventual inclusion in the program.

I share with many of you frustration over the pace of our efforts to build our bilateral trade ties with Taiwan.  Growing cross-Strait economic ties are making Taiwan an even more attractive place to do business for U.S. companies, who remain Taiwan’s top source of foreign investment.  I’ve said it before, and I’ll say it again:  The U.S. welcomes enhanced cross-Strait economic ties, which make it easier to do business and foster security.  To quote the 18th Century French philosopher Montesquieu, “Peace is a natural effect of trade.”

We recognize AmCham’s interest in building our economic ties through every means possible, including visits to Taiwan by senior U.S. officials.  Such visits are necessary to manage our relationship, and are consistent with our longstanding policy.  We also understand the value of our Trade and Investment Framework Agreement – TIFA – in building our trade relationship.

President Obama recently announced that the U.S. plans to double its exports within five years.  Taiwan is our 15th-largest export market, buying $18.4 billion in U.S. products last year.  Doubling that number may seem like a castle-in-the-sky proposition.  But let me quote Thoreau again:  “If you have built castles in the air, your work need not be lost; that is where they should be.  Now put the foundations under them.”   Let me assure you that AIT is working every day on your behalf to build our relationship with Taiwan and provide strong foundations for all of our goals.

With that, let me close with a final quote, this time from Ralph Waldo Emerson who said:  “I hate quotations.  Tell me what you know.”  As the New Year progresses, I’m looking forward to continuing our close working relationship with AmCham, hearing what you know, as well as your suggestions and ideas for how we can continue to make progress.