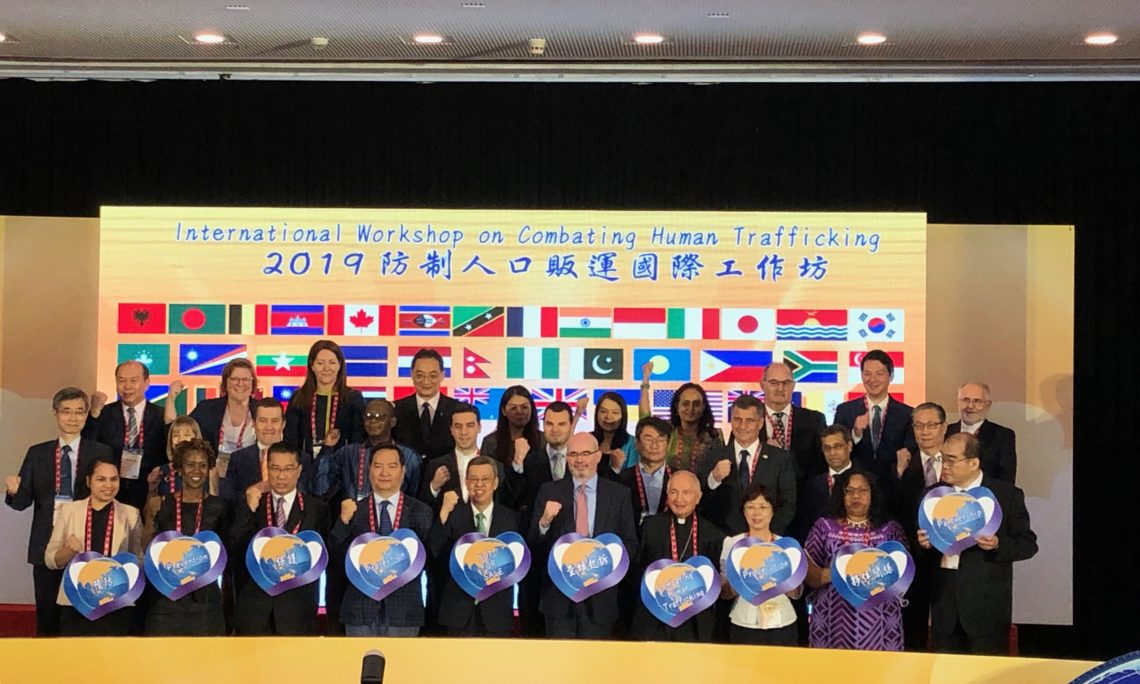 Good morning.  It is a privilege and an honor to be here today with Vice President Chen, Minister Hsu, and Minister Lo.  And it is a pleasure to welcome to all of you who have worked tirelessly to combat trafficking in persons, to bring to justice those who profit from forced labor and sexual exploitation, and to protect and help those who are either victims or potential victims of trafficking.

I would like to begin by congratulating Taiwan on being ranked Tier One in the State Department’s annual Trafficking in Persons Report for the tenth year in a row.  This is truly a rare and remarkable accomplishment, and it is testament to the dedicated work of both the Taiwan authorities and civil society over the past decade.

To achieve a Tier One ranking, a government must make serious and sustained efforts to combat human trafficking that meet the minimum standards of the Trafficking Victims Protection Act.  Only 33 countries worldwide achieved a Tier One ranking this year – six fewer than last year.  In the East Asia and Pacific region, Taiwan was joined by Australia, New Zealand, South Korea, Japan, and the Philippines in holding up this high standard.

I have seen firsthand the progress Taiwan has made over the past fifteen years.  When I served here earlier in my career, trafficking in persons was a serious challenge.  Taiwan was not ranked Tier One.  It is gratifying to see upon my return how much the situation has improved.  Taiwan has proven itself to be an indispensable partner for the United States in combating human trafficking, and, as in so many other areas, Taiwan now serves as a model to the region and the world.  We should all take pride in the progress that has been achieved so far.

In 2018, Taiwan investigated significantly more trafficking and labor recruitment cases than in previous years.  Taiwan conducted 166 trafficking investigations and prosecuted 113 individuals for crimes related to trafficking.  Behind those numbers are real people who suffered real abuses.  For this reason alone, we should never doubt the importance of the work we do.  And we must continue to challenge ourselves to do more.

In a welcome departure from previous years, the majority of traffickers that Taiwan convicted in 2018 were sentenced to greater than one year imprisonment.  We hope that this trend will continue, as stiff sentences are needed in order to deter the crime of human trafficking.

Another area in which Taiwan showed great leadership in the past year was by conducting random inspections of long haul fishing vessels on the high seas for the first time.  Abuses will not stop until traffickers come to conclude that their crimes will be uncovered – no matter where they occur.

Taiwan continues to make improvements to its legal code criminalizing trafficking offences.  Amendments to the Human Trafficking Prevention and Control Act increased fines and penalties for those convicted of crimes related to human trafficking.

Taiwan’s Mutual Assistance in Criminal Matters Act entered into force in May 2018.  The act aims to facilitate cooperation between Taiwan and other countries on cross-border investigations and prosecutions.  The United States is ready, if needed, to assist with facilitating such cross-border cooperation.

The National Immigration Agency has launched a successful program that offered reduced penalties to foreign individuals who overstayed their visas, if they willingly turned themselves in.  This is an important initiative that gives foreign workers an avenue to avoid being trafficked, which can more easily occur when they lose their legal work status.

While Taiwan has made tremendous progress, there is still room for improvement.  To maintain the Tier One ranking from year to year, governments need to demonstrate appreciable progress in combating trafficking, every year.  It is not merely enough to do what was done in the prior year, and that applies to all of us.

In the United States, we too are looking at what else we can do to eradicate human trafficking.  White House Senior Adviser Ivanka Trump has made combatting trafficking in persons one of her top policy priorities.  As she wrote in the Washington Post, “Every government in the world has a moral obligation to do all in its power to stop these heinous crimes within its borders.”

President Trump’s Interagency Task Force to Monitor and Combat Trafficking in Persons is working across the United States Government to prosecute traffickers, protect victims, and prevent these crimes before they take place.  In one of his first acts in office, President Trump signed an executive order to combat transnational criminal organizations that engage in international trafficking and exploit people.

Last November, President Trump took action to stop all non-humanitarian aid from going to Tier Three countries.  He took this action to underscore the seriousness with which the United States views this problem.  In December 2018, the President signed the Abolish Human Trafficking Act, which strengthens programs supporting survivors and resources for combating modern slavery.

As Secretary Pompeo recently said, “each one of us can be a champion for freedom and use our specific strengths to help eradicate human trafficking.”  So let us take this thought with us as we continue our work today, and every day going forward.  What specific strengths do I bring to the fight against trafficking?  How can I be a champion for freedom in a world where various forces are conspiring to limit freedom?

As many of you know, this year AIT is celebrating 40 years of U.S.-Taiwan friendship and cooperation since the signing of the Taiwan Relations Act.  Our yearlong campaign, called AIT@40, highlights the many areas of cooperation and partnership the United States and Taiwan enjoy.  No doubt the most important of these areas we have highlighted are our shared values.  Our shared commitment to dignity, freedom, and rule of law are the foundation upon which all other cooperation is built.  Taiwan’s outstanding efforts to combat human trafficking embodies this value.  It’s for these reasons that we frequently refer to Taiwan as a democratic role model, a reliable partner, and a force for good in the world.

In conclusion, let me wish you all a very successful conference.  The United States stand by Taiwan’s side, and we stand beside all of you here today, committed to moving forward together.  Please keep up this important work!