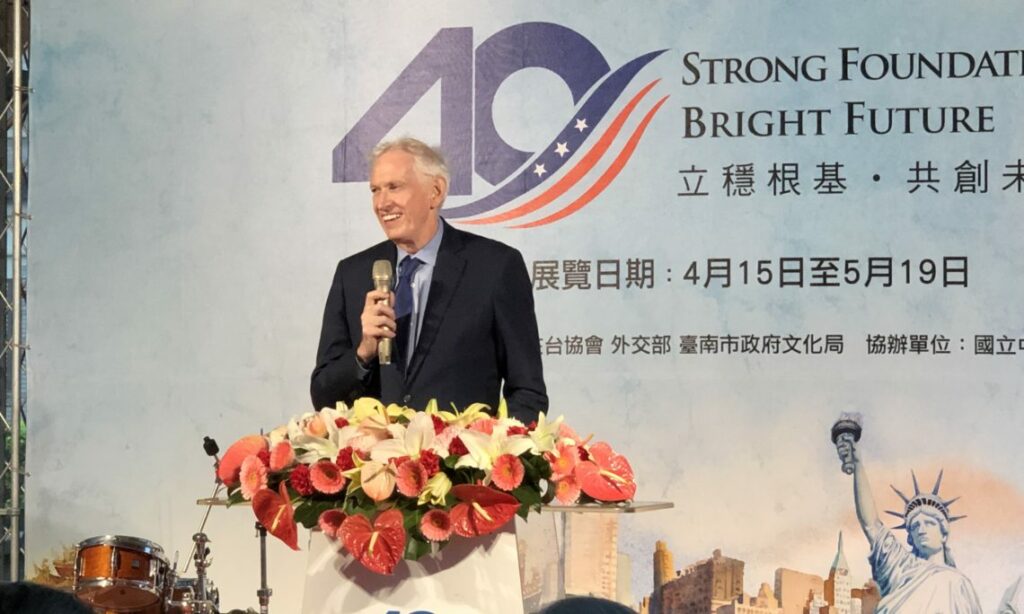 I am very pleased to be with you today to celebrate the AIT@40 exhibition opening in Tainan.  I would like to extend special thanks to the Tainan city authorities for helping us to have this exhibition here at the Tainan Creativity Center.  I would also like to thank National Sun Yat-sen University and the Ministry of Foreign Affairs for their support for this event, as well as for our many ongoing collaborations.

As you may know, the beautiful building we are seated next to today served as the site of the U.S. Information Service (or USIS) building in Tainan for almost three decades, from the early 1950s to 1979.   For many people in Taiwan, USIS libraries like this were their first stop when considering further study in the United States.  And those people who did go to study in the United States inevitably developed strong ties of affection and understanding, professional networks, and a shared sense of democratic values that form the bedrock of our relationship today.

So this building has played an important role in forging the strong people-to-people ties between Taiwan and the United States that we enjoy today.   I think it is particularly meaningful that the Tainan opening of the AIT@40 exhibition is being held at this venue.

In this exhibition, AIT has brought together documents, artifacts, interviews, hundreds of photos, and even augmented and virtual reality features to tell the story of AIT’s role in forging U.S.-Taiwan relations over the past 40 years.  The exhibition shows the breadth and depth of the exchanges and engagement that the United States and Taiwan have shared since AIT was established by the Taiwan Relations Act in 1979.

Earlier this week in Taipei, we had dozens of high-ranking U.S. government officials and members of the U.S. Congress join us – along with over 400 guests – for a celebration of the 40th Anniversary of the Taiwan Relations Act.  And in just about two weeks from now, AIT will move into its new $255-million office complex in Neihu, which will serve as our new base of operations and an important symbol of our long-term commitment to this partnership.  I would be happy to welcome our hosts here to visit us there.

As we celebrate the achievements of the past 40 years under the Taiwan Relations Act, we will be just as focused on how we can strengthen and broaden the relationship over the next 40 years and beyond — to build upon this strong foundation a bright future.

Thank you once again to Mayor Huang, our TECRO and MOFA colleagues, National Sun Yat-sen University, and to all of you for coming today to this great event.  AIT looks forward to working with you to further strengthen the many U.S.-Taiwan connections that have made this such a positive relationship for the United States, for Taiwan, and for the world.  Thank you.