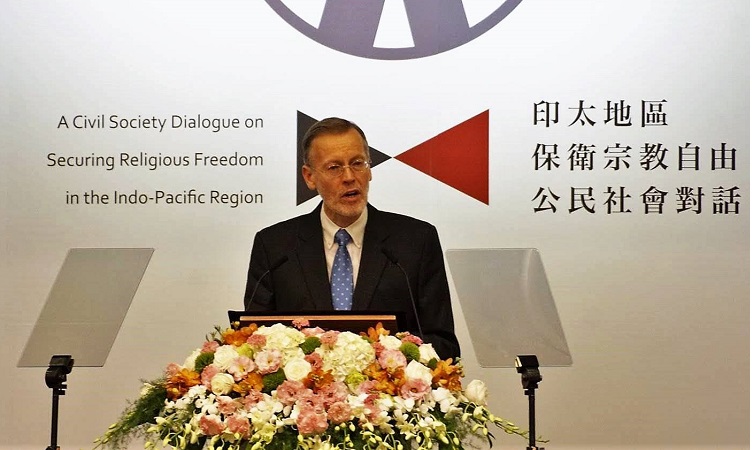 President Tsai, Speaker Su, Deputy Foreign Minister Hsu, Ambassador Brownback, distinguished guests and friends, good morning! On behalf of the American Institute in Taiwan, it is my honor and distinct pleasure to welcome everyone to this important and historic gathering aimed at securing and promoting religious freedom in the Indo-Pacific region.

As some of you may know, this is the third time in my career that I have had the privilege of serving in Taiwan. For those of you who are first time visitors, you will soon discover that becoming acquainted with Taiwan leads quite naturally to developing a fondness for Taiwan.

My first exposure to Taiwan came in 1978 as a missionary, not a diplomat. Little did I know at the time, but my missionary experience in southern Taiwan would shape the trajectory of my future career in profound ways. It planted the seeds of fascination with foreign affairs that would grow over time and lead me to join the Foreign Service.

It is quite fitting that I now have this wonderful opportunity as AIT Director to open a forum on religious freedom in Taiwan. My early engagement with Taiwan would not have happened were it not for my faith and for Taiwan’s recognition of the freedom of religion, which predates its democratization and allowed my church to send missionaries like me here, even during the martial law era. The democratic transformation that Taiwan has undergone since the lifting of martial law in 1987 has led to a flowering and maturation of civil institutions that protect all of the fundamental freedoms in ways that were difficult to imagine when I was here in 1978.

Taiwan’s democratic transformation has been truly impressive. It has become a model of not only how to protect and promote democratic values, but how to inculcate these values into society so deeply that the people internalize the importance of putting them into practice. Taiwan has been tremendously successful at providing legal protection and respect to a wide range of faiths – everything from large religious organizations with a global reach, such as the Presbyterian Church and the Buddha’s Light International Association, to small communities, such as the countless little Matsu shrines scattered across Taiwan’s coastal villages and loosely organized gatherings of Falun Gong practitioners meditating in a city park at dawn.

The freedom that has allowed religious communities in Taiwan to flourish has benefited the United States as well as many other countries. For example, the Buddhist monastic community of Dharma Drum Mountain founded by Master Sheng Yen (聖嚴) has established 30 affiliated meditation centers across 19 states, including my home state of Utah.

The Tzu Chi (慈濟) Buddhist Compassion Relief Foundation founded by Master Cheng Yen (證嚴) has also set up branches in the United States and 46 other countries. Tzu Chi has played an invaluable role as a frontline first responder to natural disasters worldwide, providing various forms of relief and medical care to victims in over 85 countries. For instance, Tzu Chi sent teams to Indonesia and Sri Lanka in the wake of the 2004 tsunami, and to Pakistan in 2005 and Nepal in 2015 after those countries suffered devastating earthquakes.

In the aftermath of Hurricane Sandy in 2012, Tzu Chi donated $10 million to those affected in the New York and New Jersey area. More recently Tzu Chi was active in relief efforts during Hurricane Harvey in 2017. On behalf of the people of the United States, let me say thank you to Tzu Chi and other religious groups in Taiwan that so often act on their faith beyond their borders for the benefit of others.

Few places in the Indo-Pacific region, or worldwide for that matter, can claim to have given birth to religious organizations that have done so much to inspire the world and contribute to the common good beyond its own borders. For these and other reasons, I can think of no better place than Taiwan to host this inaugural conference for the Indo-Pacific region.

This forum today is an opportunity for all of us to learn from one another as we work together to promote a free and open Indo-Pacific. When we say free, we mean free, both in terms of security—free from coercion by other nations—and in terms of values and political systems. Free to choose trading partners. Free to exercise democratic agency. And yes, free to believe in and practice the religion of your choice, or no religion at all.

Throughout 2019, AIT is celebrating the 40th anniversary of the Taiwan Relations Act, a U.S. law that has served as the bedrock of our relations with Taiwan and allowed a close and enduring partnership to form between us. For each month, we are highlighting a particular theme in U.S.-Taiwan relations and organizing events around that theme. For March, we are celebrating shared values and today’s forum is the landmark event for shared values month. As I survey the room and see friends hailing from more than 15 countries around the region, I am reminded that the values that the United States shares with Taiwan are, at their core, universal values. The world’s great religions all point to universal truths. They transcend national and ethnic identities. Faith can thus be a great unifying force when we keep in mind its transcendent and universalistic nature.

Before I close, let me say what a privilege it is to be joined today by Ambassador Brownback. He is a long-time leader on religious freedom and other human rights issues. During the decade and a half that he represented the state of Kansas in the U.S. House of Representatives and the U.S. Senate, Ambassador Brownback was a tireless voice for victims of religious persecution and a key sponsor of the International Religious Freedom Act of 1998. We are so lucky to have him with us today.

In conclusion, as you take the lessons learned from this conference back to your home countries, please know that the U.S. embassies and consulates where you live stand ready to support your efforts to promote religious freedom and to ensure that democracy and all fundamental freedoms continue to grow and thrive in the 21st century throughout the Indo-Pacific region.

Thank you again for coming!

「放眼印太區域，甚至全世界，少有其他地方像台灣一樣蘊育出這麼多宗教團體，不僅奉獻良多，成為激勵世界的力量，也跨越邊界，為社會共好做出貢獻。… 美國與台灣所共享的價值，在核心本質上，其實正是普世的價值。世界上的各個偉大宗教，其實都指向普世的真理，它們超越國家或種族身份認同。當我們記得信仰超然及普世的本質，信仰就能成為團結眾人的力量。」美國在台協會處長酈英傑今天在2019年區域宗教自由論壇「印太區域保衛宗教自由公民社會對話」的開幕致詞中說。#religiousfreedom #SharedValuesMonth #USTaiwanRelations #AITat40 “Few places in the Indo-Pacific region, or worldwide for that matter, can claim to have given birth to religious organizations that have done so much to inspire the world and contribute to the common good beyond its own borders…the values that the United States shares with Taiwan are, at their core, universal values. The world’s great religions all point to universal truths. They transcend national and ethnic identities. Faith can thus be a great unifying force when we keep in mind its transcendent and universalistic nature.” AIT Director Brent Christensen speaking today at the 2019 Regional Religious Freedom Forum entitled “A Civil Society Dialogue on Securing Religious Freedom in the Indo-Pacific Region.