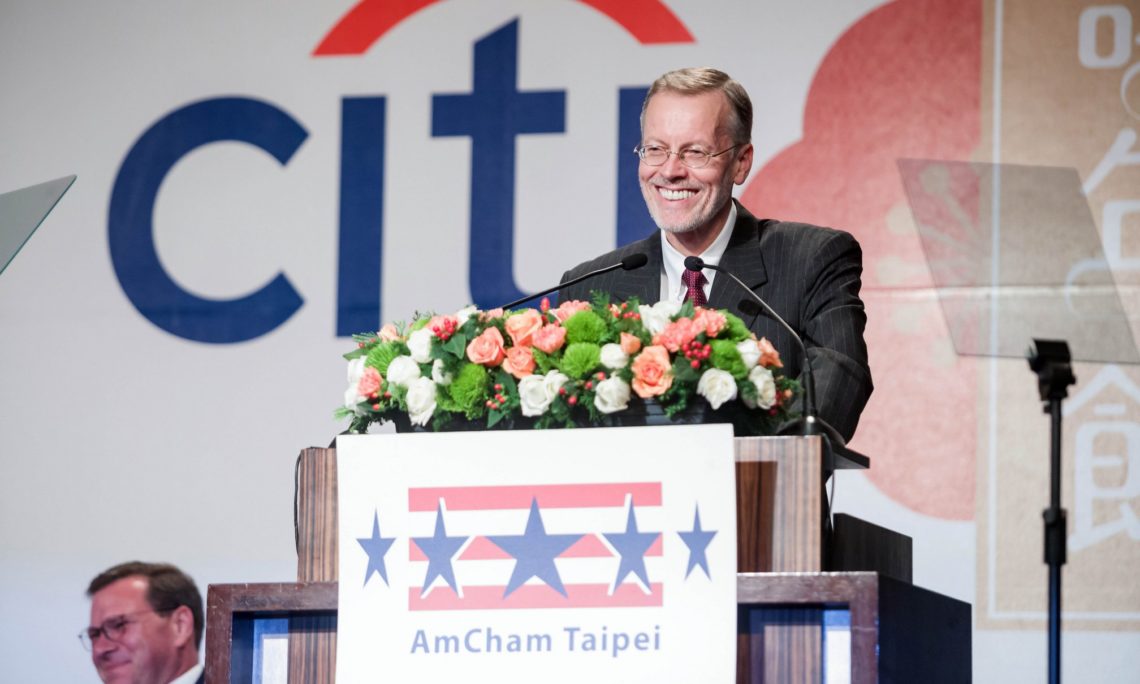 It is my privilege to speak with you tonight on what is the anniversary of a historic occasion.  Forty years ago to the day, President Jimmy Carter signed the Taiwan Relations Act, which codified into law the U.S.-Taiwan relationship and established the American Institute in Taiwan.  I have been fortunate in my career to serve at AIT on three separate occasions, and I am humbled to stand before you now as the Director of an institution that enables the ever-expanding cooperation that defines the U.S.-Taiwan friendship today.

We at AIT are celebrating our 40th birthday and marking the 40th anniversary of the Taiwan Relations Act, what we call the “TRA,” with a variety of activities we collectively call “AIT@40.”  Each month, we are highlighting a different aspect of U.S.-Taiwan cooperation.  April is Trade & Investment Month, so it is fitting that AmCham’s Hsieh Nien Fan has brought us all together this evening.

Over the past 40 years, the U.S.-Taiwan relationship has matured in ways that have surprised even the most optimistic of observers.  Allow me to highlight some of these developments in four categories that line up with my priorities as AIT Director. Or what I call the 《四個增進》– or “four promotes” — of promoting security cooperation, economic and commercial ties, Taiwan’s global role, and people-to-people ties.

On security cooperation, the text of the TRA is instructional: The United States will – and I quote – “consider any effort to determine the future of Taiwan by other than peaceful means, including by boycotts or embargoes, a threat to the peace and security of the Western Pacific area and of grave concern to the United States.”  We are committed by the TRA to provide defense articles and services to enable Taiwan to maintain a sufficient self-defense capability.  This commitment has created space for Taiwan to develop what I think are its three greatest assets: its democracy, its market economy, and its culture, thus providing a better life for the tens of millions who call Taiwan home.

We remain committed to expanding our economic and commercial relationship.  Taiwan is our eleventh largest trading partner, but also one of the key players in the high-tech global supply chain.  Indeed, Taiwan is a critical partner for us in the area of computer and smartphone technology that has revolutionized the way we communicate and do business.  And Taiwan is also now working closely with us on the next generation of the digital economy, providing a home to U.S. businesses researching and developing artificial intelligence and partnering on emerging technologies like 5G and the Internet of things.   Taiwan’s economy consistently ranks among the best in terms of competitiveness and openness.

This standard of excellence, and the values that we share, prompted us to launch the Global Cooperation and Training Framework (or “GCTF”) with Taiwan in 2015 to highlight Taiwan’s strengths and expand its global role.  Through the GCTF platform, we have worked to bring U.S. and Taiwan experts together to share our know-how with the world.  Since that time, we have held 16 workshops that have attracted more than 250 participants from nearly two dozen countries.  The United States has long been an ardent supporter of Taiwan’s meaningful participation in international organizations, and in coordination with other likeminded countries, we continue our efforts to enable Taiwan’s voice to be heard.  As a democratic role model, a reliable partner, a generous donor, and a force for good, Taiwan’s broader participation on the world stage will yield even greater benefits for the global community in the years to come.

A few days from now, on April 16, President Tsai and I will once again share a stage as we look forward to opening the Women’s Economic Empowerment Summit.  Immediately after this summit, AIT will also join with Taiwan counterparts in holding a follow-on GCTF workshop on women’s economic empowerment for the next two days.  As many of you know, the United States government has recently launched a global effort called the Women’s Global Development and Prosperity initiative.  We believe empowering women is not only key to global prosperity, but will also be important for Taiwan’s economic future.  This summit will bring together 500 participants from both the public and private sectors from 15 countries to highlight women’s central role in economic development, share experiences, and launch new initiatives to empower women around the world.  I hope many of you will attend.

Whether it is security issues, trade and investment, or global cooperation, the U.S.-Taiwan relationship is at its core based on people-to-people ties.  Taiwan’s inclusion in our Visa Waiver Program in 2012 and the 2017 rollout of U.S. Global Entry here in Taiwan have helped foster these connections.  There is a deep level of trust between the people of the United States and the people of Taiwan, and an extraordinary level of cooperation exemplified by our extensive academic and business exchanges.  President Tsai is one of many Taiwan leaders who hold degrees from the finest U.S. universities.  In business, science, technology, fashion and film, there are numerous other U.S. educated Taiwan superstars.  In the movie business, there are few movie makers as successful as Ang Lee, whose movies have won nine academy awards, including two awards for best director and two for best film.  And Silicon Valley is filled with successful entrepreneurs from Taiwan who maintain productive collaborations with hi-tech companies here in Taiwan.

I look forward to advancing the many areas in which the United States and Taiwan have already found successful partnerships, and finding new ways to advance our shared values and interests.  In particular, I look forward to conducting this work from our new AIT office in Neihu when we move in just a few short weeks.  AIT has done amazingly well working out of a converted military headquarters office on Xinyi Road for over four decades, but we have clearly outgrown it.  I am excited to see what we can do from our new office – the only purpose-built facility for a foreign mission in Taiwan.

As I mentioned at the beginning of my remarks, as part of our AIT@40 program, we have designated April as trade and investment month.  So, it is fitting that tonight we have the State Department’s Deputy Assistant Secretary for Trade Policy and Negotiations here to speak to us.  David Meale is a career member of the Senior Foreign Service.  He was previously the Director for Sanctions Policy and Implementation, the Associate Dean for the Leadership and Management School at the Foreign Service Institute in Washington, DC, Deputy Chief of Mission at the U.S. Embassy in Bangladesh, and Counselor for Economic Affairs at the U.S. Embassy in Ukraine.  He is also an old friend and a member of the AIT family, having served in Taipei before.  I have been a big fan of his for a long time and I am very pleased he can be with us here tonight.  So, please join me in welcoming Deputy Assistant Secretary David Meale.