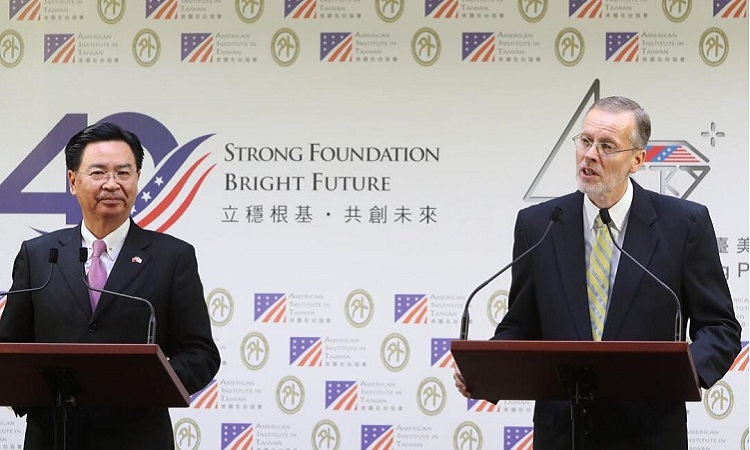 Foreign Minister Wu, good morning to you, and to all our friends from the press.  On behalf of the American Institute in Taiwan, I am honored to join you here today to discuss one of the most special aspects of U.S.-Taiwan relations: the shared values that unite us.

As you may know, throughout 2019, AIT will be commemorating the 40th anniversary of the Taiwan Relations Act – a U.S. law that has served as the framework of our relations with Taiwan and allowed a close and enduring partnership to form between us.   For each month, we are highlighting a particular theme in U.S.-Taiwan relations and organizing events around that theme.  For the month of March, we are celebrating shared values.

I would also note that good governance is one of the three pillars of the Trump Administration’s Indo-Pacific Strategy.  The United States and Taiwan share the belief that advancing transparency and rule of law in the region in turn contributes to the goal of a free, open, and prosperous Indo-Pacific region.

And for these reasons it gives me great pleasure to join the Foreign Minister in announcing today that the United States and Taiwan have agreed to establish a new annual dialogue called the Indo-Pacific Democratic Governance Consultations.  This important new forum will serve as a regular occasion for the United States and Taiwan to explore ways to increase our cooperation and pursue joint projects in the region that assist other countries in addressing the governance challenges of the day.   We expect the first iteration to be held in Taipei sometime in September, and the U.S. delegation will be led by a senior official from the State Department’s Bureau of Democracy, Human Rights, and Labor.  We couldn’t ask for a better partner than Taiwan in promoting a free and open Indo-Pacific region.

America’s deep and abiding interest in Taiwan’s ongoing success, as well as its security, is firmly rooted in the core values and commitment to democracy that we share.  Democratic values, fundamental freedoms, and human rights give life to our respective system of governance and lie at the center of our sense of self.  And yet I know the Foreign Minister would agree that while these values are strongly associated with the United States and with Taiwan, strictly speaking, they do not belong to either of us.  Rather they belong to each and every member of the human race all around the world.  They are God-given, universal rights.  The failure of some governments to recognize this truth does not detract from it in the slightest.

This common conviction that all people in all places are deserving of the same fundamental freedoms that Taiwan and the United States protect for our peoples is the basis on which we seek to partner with Taiwan to do whatever we can to assist others around the world who are pursuing progress in their own countries.

On March 10-11, we jointly held a forum on promoting religious freedom in the Indo-Pacific region, which was the landmark event for shared values month.  Our Ambassador-at-Large for International Religious Freedom Sam Brownback joined us here in Taipei for important discussions that convened representatives from 18 countries.  It was a fruitful dialogue and we are excited about the follow-on projects that will emerge from it.

During the conference, Taiwan pledged to donate US$1 million over five years to the International Religious Freedom Fund set up by Secretary Pompeo last year.  Let me take this opportunity thank the Foreign Minister and the people of Taiwan for your generosity.  Your donation will help to support initiatives that address the barriers to freedom of religion worldwide, including advocacy initiatives, awareness campaigns, public messaging, community inclusion efforts, and conflict prevention.  It will also provide direct assistance to those facing discrimination on the basis of religion or belief, including assistance to address threats of violence and medical needs resulting from violent assault.  Please know that the United States appreciates the thoughtfulness and care that you give to this issue.

On March 8, in recognition of International Women’s Day, AIT worked with Taiwan’s vibrant civil society to screen a series of short documentary films about American women who have reached the highest levels in their fields, which then led to a lively discussion about the issues facing women in Taiwan today.  Few places in the world can claim to have achieved as much as Taiwan toward the goal of more equal representation between men and women in leadership positions.  But we all have more to do, and the film series provided ample food-for-thought, and an opportunity to discuss how we can learn from each other, and work with each other, to better ensure equality of opportunity.

On March 26-28, AIT will once again be cooperating with the Ministry of Foreign Affairs along with the Ministry of Justice Investigation Bureau to host an international workshop under the rubric of the U.S.-Taiwan Global Cooperation and Training Framework (GCTF).  We are expecting participants from 16 countries, and the focus of this forum will be combatting corruption in the public and private sectors, which reflects our shared values of transparency and accountability.

Thank you again for coming today and for recognizing the importance of democratic values as the ties that bind us together.