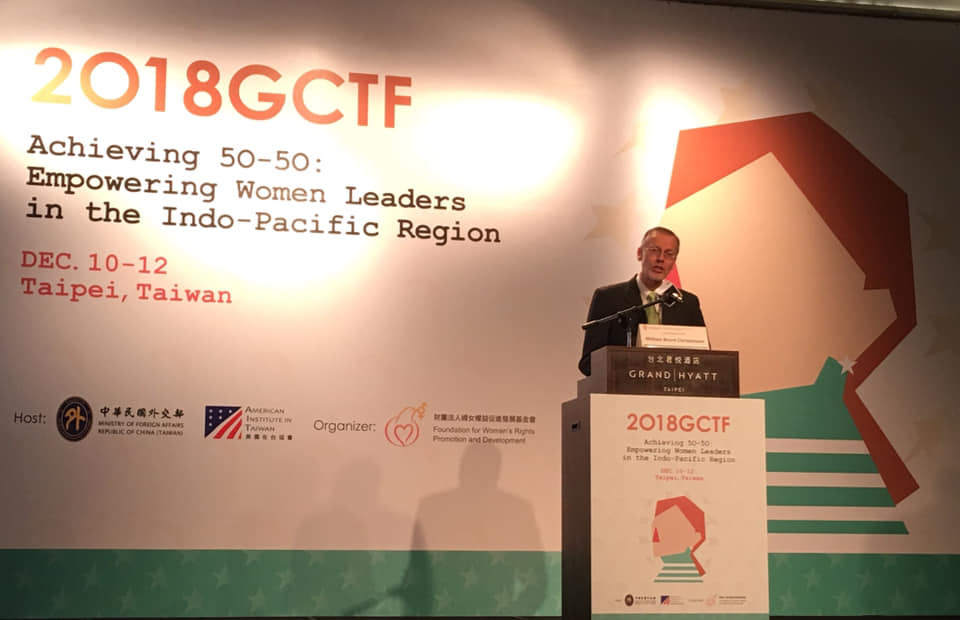 Deputy Foreign Minister Tsao, Congresswoman Schroeder, distinguished guests, and friends, good morning.  On behalf of the American Institute in Taiwan, it is my honor and distinct pleasure to welcome everyone to this International Workshop entitled, “Achieving 50-50:  Empowering Women Leaders in the Indo-Pacific Region,” which is being held under the auspices of the U.S.-Taiwan Global Cooperation Training Framework.

As I’ve noted before, when I left Taiwan in 2015 as Deputy Director of AIT, the Global Cooperation and Training Framework – known as the GCTF – was still at a fledgling stage.  As I return to Taiwan three years later, I continue to be proud of how far our partnership has come.  Building people-to-people ties is one of my chief goals as Director, and as will become evident to you all over the next two days, GCTF is an excellent forum for doing just that.

The GCTF is a partnership to demonstrate and share Taiwan’s strength and expertise with the rest of the world.  Taiwan’s democratic development and its contributions to the world are deserving of the international community’s recognition and respect.   At AIT, we are looking forward to 2019 when we will celebrate the 40th anniversary of the Taiwan Relations Act, a U.S. law that has served as the bedrock of our relations with Taiwan and allowed a close and enduring partnership to form between us.

When it comes to empowering women to not only participate in the political process, but to lead it, Taiwan truly stands out as a model to us all.  Not only does Taiwan currently have a woman serving as its president, Dr. Tsai Ing-wen, but nearly 40 percent of Taiwan’s legislators are women.  Nearly 20 years ago, Taiwan had already elected a woman to the vice-presidency.  In the local elections just held on November 24, Taiwan’s voters chose women to head seven of 22 counties and municipalities, and elected women to fill 33.8 percent of the city and county council seats.

Few countries in the Indo-Pacific region, or worldwide for that matter, can claim to have achieved as much as Taiwan has toward the important goal of more equal representation between men and women in leadership positions.  But we all have more to do, and that is precisely why we are gathering here today and tomorrow: to learn from each other, to build leadership skills, and to take those lessons back to our home countries and put them into action.

The topic of this workshop is not a women’s issue per se.  It has great significance for us all.  That should be an obvious point, but too often it isn’t.  Programs aimed at women are framed as if it were a niche issue – it’s only roughly half the population after all.  But the truth is, whether a society succeeds at empowering its women to lead is a key measure of the overall health of that society, and a powerful indicator of how likely that society is to prosper.  When women are given equal standing in the workforce, they drive economic growth across all sectors.  Societies that educate women have stronger families and healthier children.  Nations that give women equal rights are more stable and secure.  Conversely, nations that deny equal rights to women are much more prone to instability and tend to be much poorer than nations that harness the capabilities and talents of their women.

But empowering women to lead is a journey; it takes time.  And none of us has the luxury of resting on our laurels in confidence that we have reached our destination.  Those of us from the United States look forward to hearing from all of you about specific policies and programs that have succeeded in your countries that might work for us too.  I am so glad to see that we have participants here from 14 countries.  We are eager to learn from your accomplishments, as well as your setbacks, and to share in your visions of victories yet to be won.

In addition to the great speakers we have arranged, this GCTF will feature episodes from a film called “The Firsts,” a multimedia project documenting pioneering women in the United States.  The stories of Nikki Haley, the first Indian American woman to be elected a state governor, and Sylvia Earle, the first woman named Chief Scientist of the U.S. National Oceanic and Atmospheric Administration, are just a couple of inspiring examples in the film.  “The Firsts” is part of the “American Film Showcase”, a project that supports the exchange of U.S. films, filmmakers, and film experts in support of U.S. foreign policy priorities, including women’s empowerment, human rights, civil society, entrepreneurship, and countering disinformation.

For our guests from elsewhere in the Indo-Pacific region, welcome to Taiwan, and thank you for traveling great distances to join us here today.  If this is your first visit, you will soon discover that Taiwan is home to not only some of the friendliest people in the world, but also some of the most talented and creative.  We encourage you to make the most of your time here, and we hope that this will be only the first of many visits to come.

Before I close, let me say what a privilege it is to be joined today by Congresswoman Schroeder, the first woman elected to the U.S. Congress from the state of Colorado and the first woman to serve on the House Armed Services Committee.  She is a long-time leader on these issues and an American trailblazer.  I am honored to share the stage with her today and to welcome her to Taiwan.

In conclusion, as you take the lessons learned from this workshop back to your home countries, please know that the U.S. embassies and consulates where you live stand ready to support your efforts to cultivate women leaders and to ensure that democracy and good governance continues to grow and thrive in the 21st century throughout the Indo-Pacific region.

Thank you again for coming!