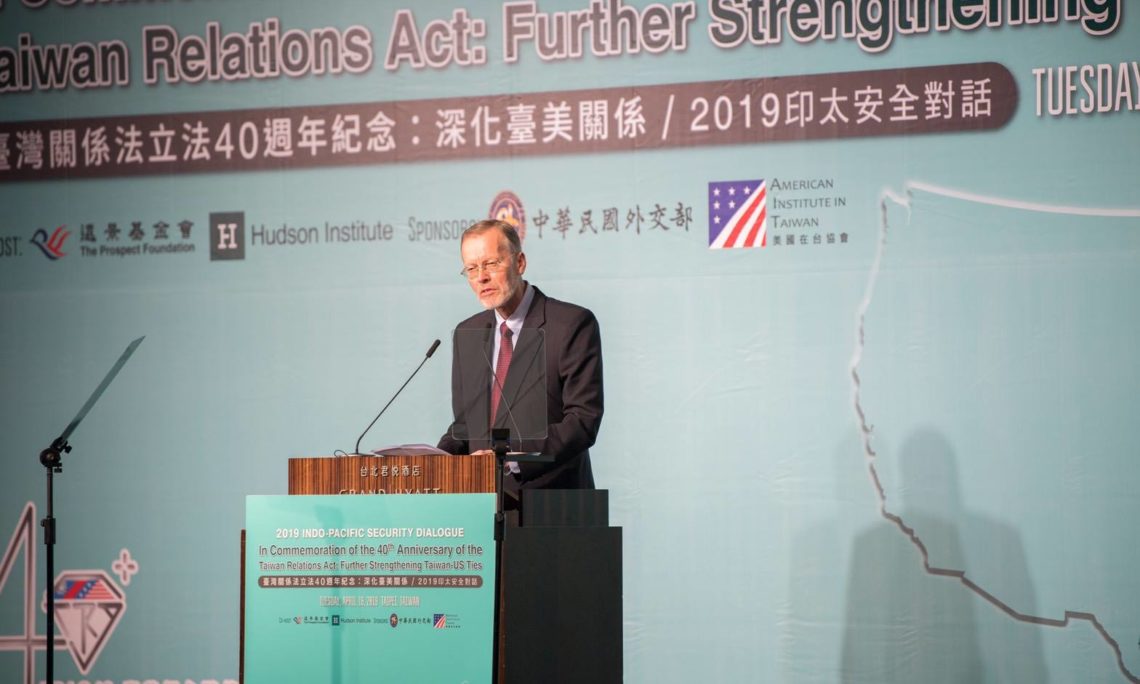 Please allow me first to thank the Ministry of Foreign Affairs, the Prospect Foundation, and the Hudson Institute for making this event possible.  Today’s discussion is an opportunity not only to reflect on all that the United States and Taiwan have achieved together, but also to look at ways to strengthen this relationship.  I am certain the luminaries that have assembled here today will enlighten all of us with their ideas.

Earlier this year, AIT launched a yearlong campaign called AIT@40, which celebrates 40 years of friendship and partnership between the United States and Taiwan since the signing of the TRA.  Each month, the AIT@40 campaign explores a different facet of the U.S.-Taiwan relationship with monthly themes such as Trade & Investment, Shared Values, and Education.  The campaign not only recognizes past accomplishments, but also looks at ongoing and future efforts, as exemplified by our motto “Strong Foundation, Bright Future.”（立穩根基，共創未來）

As many of you have no doubt read in the press this morning, I had the pleasure of hosting a ceremony yesterday commemorating the 40th anniversary of the Taiwan Relations Act.  AIT was honored to share the occasion with President Tsai, senior Taiwan leaders, a large U.S. delegation led by former U.S. House Speaker Paul Ryan, and many other prominent individuals from the United States and Taiwan.  Looking back at the last forty years, we have much to be proud of.  The legislators who signed th Taiwan Relations Act 40 years ago look upon the democracy that Taiwan has become today and the flourishing friendship that the United States and Taiwan enjoy and say that this result is the fulfillment of their most optimistic hopes and aspirations.

And fulfill them, we have.  Our obligation to support Taiwan in maintaining a sufficient self-defense capability against coercion is a foundational element of the Taiwan Relations Act.  Beijing’s efforts to unilaterally alter the status quo are harmful and undermine the framework that has enabled peace, stability, and development for decades.  Yesterday’s exercise conducted near Taiwan is just the latest example of counterproductive and provocative actions.  As National Security Advisor John Bolton wrote, “Chinese military provocations won’t win any hearts or minds in Taiwan, but they will strengthen the resolve of people everywhere who value democracy.  The Taiwan Relations Act and our commitment are clear.”  Our policy of supporting Taiwan’s defense needs, consistent across seven U.S. administrations, both Democratic and Republican, has helped foster Taiwan’s prosperity and democratic development while also bolstering cross-Strait and regional stability.  In evidence of this support, the Administration informed Congress this morning of a $500 million sale to extend a longstanding pilot training program for Taiwan’s F-16 fleet.  And the United States’ vision for a free and open Indo-Pacific dovetails neatly with our security cooperation with Taiwan.  This vision promotes stability and security cooperation across the Indo-Pacific region to ensure that all parties are free from external coercion.  This approach also includes capacity building in areas such as humanitarian assistance, disaster relief, and international law enforcement.

In terms of the economic relationship, no matter how you do the math, there is no doubt that our partnership creates prosperity for both of us.  We see value in further improving our economic ties and helping each other’s economies to grow.  Secretary of State Mike Pompeo underscored this sentiment in his speech last July about the Indo-Pacific region where he noted the important role that Taiwan can play in the areas of the digital economy, energy, and infrastructure.  The United States is particularly keen to support Taiwan as it seeks to diversify its trade relationships and expand its trade and investment with countries across Asia.

So, to summarize, I believe that Taiwan has a natural and important role to play in helping promote a free and open Indo-Pacific region through economic ties, security, and also governance.  It can serve as a role model both in terms of democratic development and innovation-led and private sector-led economic growth to countries across the Indo-Pacific.  Taiwan can also work through regional institutions such as APEC and programs such as our Global Cooperation and Training Framework to share best practices in law enforcement, disaster relief, and many other areas.  And Taiwan’s New Southbound Policy has enormous potential to contribute to regional cooperation and stability.

Looking forward to the next 40 years, I certainly cannot predict the specifics of what will transpire, but I am confident of a few things.  Namely, the United States and Taiwan will continue to grow closer.  The United States will remain steadfast in our vigorous commitments to Taiwan and to the region more broadly.  Taiwan will continue to grow stronger and its vibrant democracy will remain central to its continued success.  And as was articulated by Vice President Pence in a speech last October, “America will always believe that Taiwan’s embrace of democracy shows a better path for all the Chinese people.”  In short: we are and will remain a true friend of Taiwan, and the obligations that we have undertaken in the course of that friendship, as enshrined in the TRA, are solid and unwavering.