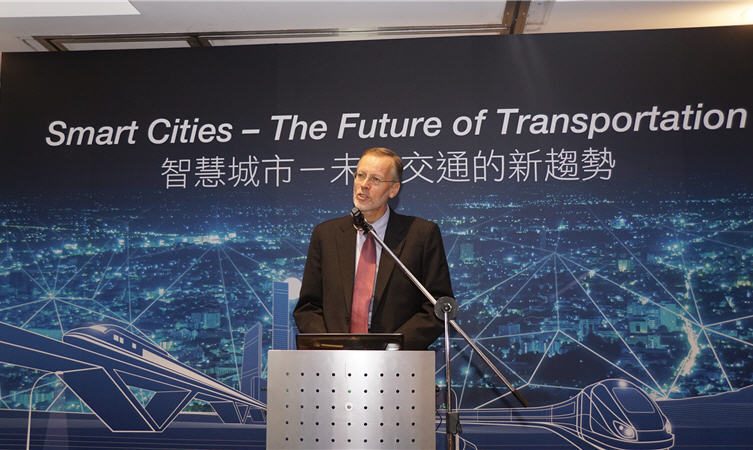 Thank you all for coming.  I’m very pleased to be with you here today.

As many of you know, I just arrived in Taiwan earlier this month to assume my new role as AIT Director.

I wanted to take this opportunity to share a few of my thoughts about the future direction of the U.S.-Taiwan economic relationship.  There is no better event for doing so than today’s symposium, since technology has been at the heart of our close economic partnership for decades.  As we look to the future, one important aspect of this partnership will be our cooperation in developing the world’s emerging technologies, including smart cities and smart transportation.

Let’s start with some basic observations I think we can all agree with:  First, the Indo-Pacific region is clearly on the rise.  It currently accounts for half of the world’s population, but only one third of global GDP.  This imbalance will not last, and it seems inevitable that the global economic center of gravity will shift more and more towards Asia.  This will create both opportunities and challenges which will need to be managed well.

Second, The United States and Taiwan face many of the same economic challenges.  China is aggressively using market-distorting subsidies and other practices, including intellectual property theft and forced technology transfer, in an attempt to capture traditional and emerging technology industries.  China is also actively seeking to attract the world’s top talent to pursue their careers in China.  Taiwan has very much been the target of these efforts, and nowhere is this more true than in the semiconductor industry, where Taiwan is a global leader.

Third, the only way we will be able to uphold the international rules-based order is if we aggressively defend it.  It is because the United States is committed to open markets and free trade that we are compelled to sometimes take steps to dissuade those who would flout global rules and principles.

As Secretary of State Pompeo explained last month at the Indo-Pacific Business Forum, the United States has a clear vision for a free and open Indo-Pacific.  Free means economies should be free from outside coercion.  Open means we should all adhere to market economy principles.  This is what the United States stands for in the Indo-Pacific, and what we intend to work for every day in our relationship with Taiwan.

Our Indo-Pacific Strategy has three key economic pillars:  infrastructure, energy, and most relevant to this gathering, the digital economy.  On infrastructure, the United States wants to help Taiwan with its Forward-Looking Infrastructure Development Program.  On energy, we want to work with Taiwan to meet its energy needs as it transitions to a nuclear-free future.  On the digital economy, we want to be Taiwan’s indispensable partner as it seeks to transition to an innovation-based economy through President Tsai’s “5+2” innovative industries plan.

The American Columnist Thomas Friedman once famously said Taiwan is his favorite economy in the world.  Why?  Precisely because it has so few natural resources, it has dedicated itself to “mining its 23 million people, their talent, energy, and intelligence.”  American firms have definitely taken notice.  It seems as if nearly every month, some large American technology firm decides to set up a new research and development lab or make Taiwan the center of its software-hardware integration efforts.

This is equally true in the domain of smart city technologies.  Smart transportation is quickly becoming central to the development of smart cities.  In the next 20 years, more than 3 billion people worldwide are expected to move into cities.  How to efficiently move these populations around without creating unbearable traffic congestion or unsustainable levels of pollution will be central policy and technology challenges for city planners and the private sector alike.  Taiwan and the United States are quickly emerging as world leaders in the development of new smart transportation technologies, with explosive growth potential.

In particular, Taiwan is leading the way in the development of sustainable smart city and circular economy technologies.  As billions more people are expected to move into the global middle class and into cities, developing environmentally sustainable technologies is essential.

I have every confidence that Taiwan will succeed in its goal of transitioning to an innovation-based economy.  But doing so will require foresight and courage; disruptive new technologies always challenge vested economic interests.  Policy-makers and the public at large need to keep their eyes on the long-term gains of innovation while managing the short-term growing pains as society adjusts to new technologies.  This is not always easy, but it is necessary.

Once again, I want to thank you all for coming to today’s symposium.  We are very fortunate to have some of the most forward-looking minds in the world with us today, and we are looking forward to some very stimulating discussions.