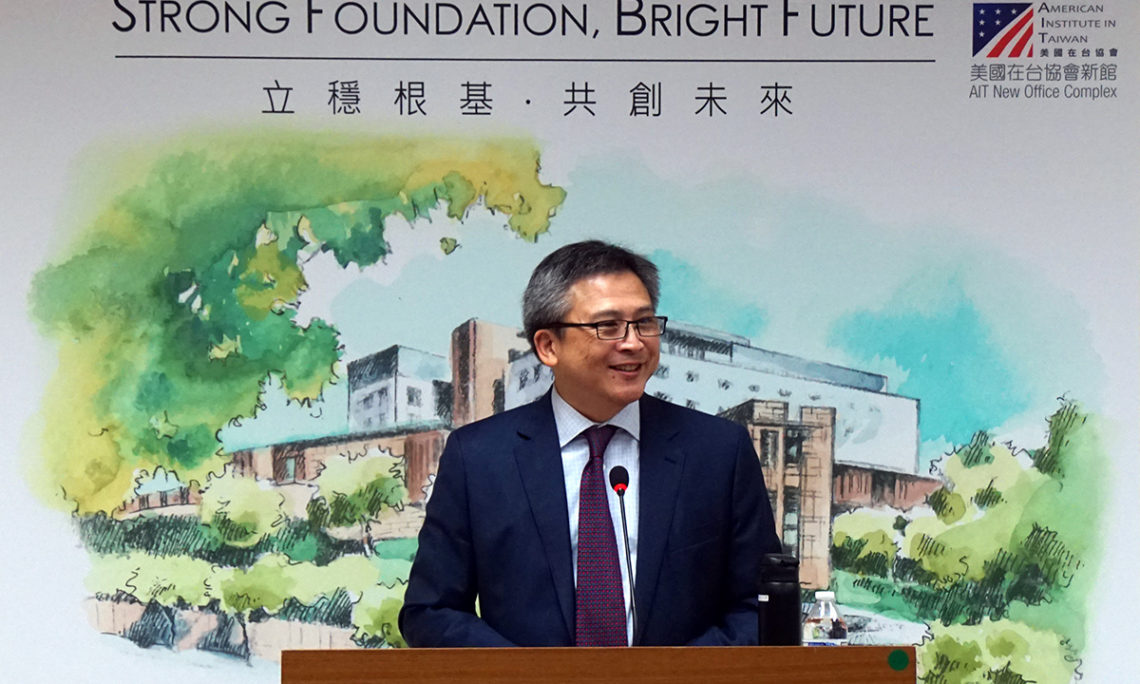 Thank you all for coming today. This is an important occasion. One that has been many years in the making.

Today, I am pleased to announce that on June 12, the American Institute in Taiwan will hold a ceremony to dedicate AIT’s new office complex in Neihu. AIT Chairman James Moriarty and I will be joined by President Tsai Ing-wen and other distinguished guests, and you, the media, to mark this unique moment in AIT’s nearly 40-year history. AIT’s new office complex in Neihu is modern, environmentally friendly, and the first purpose-built facility by a foreign representative office in Taiwan. But it is more than just a new building. It is a tangible symbol of U.S. – Taiwan friendship. I hope you haven’t made vacation plans yet, because June 12 is a historic milestone in the U.S.-Taiwan relationship that you won’t want to miss.

You may have seen pictures of our new complex in our recent Facebook post. Under the picture, it says “Strong Foundation, Bright Future.” These words apply to the U.S.-Taiwan partnership, as well as to the new AIT building.

As two democracies, the United States and Taiwan both understand that great things take time and care to develop. Our new building has certainly taken some time – a very long time – but I can assure you, it has a very strong foundation, just like the U.S.-Taiwan friendship. And it is built to last through the 21st Century and beyond, just like the U.S.-Taiwan relationship.
There are so many ways to measure a relationship. I can tell you about the on-average half a million people who travel from Taiwan to the United States every year, and that we were happy to welcome Taiwan to be the 12th in the world and the 3rd in Asia to join Global Entry last fall, and that Taiwan is the United States 11th largest trading partner.

Those numbers tell you we have an important relationship, but they don’t tell the whole story. Ultimately, the measure of the strength of a relationship is who you trust, who you turn to when you need support tackling tough challenges, who you think of as your friend and partner. For the United States, Taiwan is all of these things – a vital and reliable partner with the will and the ability to play a positive role in meeting regional and global challenges. Now, we will have a building worthy of this important relationship from which to carry out our work and continue to deepen our partnership.

There are many people to thank for their contributions to the new AIT facility. As you know, Taiwan people of all circles have been strong supporters of the project. In Washington, our Congress and the State Department have been key facilitators. Perhaps the most important people to thank are the people of Taiwan and the American people. This symbol of friendship gets completed only with your strong support for the U.S.-Taiwan partnership. When people ask me “who are the builders of the new AIT complex,” I tell them “you are.” So I hope when you get a chance to see the new building, you will share my feeling of pride because you helped to build it.

In 2019, AIT will mark our forty-year anniversary. In celebration of this anniversary, as well as our relocation to Neihu, AIT is collaborating with the National 228 Museum on a new exhibition titled, “Strong Foundation, Bright Future: AIT@40, U.S.-Taiwan Relations Since 1979.” The exhibit features photos, documents, and videos commemorating 40 years of AIT’s key role in building U.S.-Taiwan relations. The exhibit will open next week, May 31. We look forward to seeing you there to celebrate the growth and the strength of the U.S.-Taiwan partnership.

One last important note — The event on June 12 is a Dedication Ceremony – but we’re not moving in just yet. That will come later this summer. So after June 12, people should still come to our offices in Xinyi for their visa interviews, U.S. passports, and other business. We’ll be sure to let everyone know before we open for official business in Neihu. Following us on Facebook is a good way to get the latest news.

And with that, I’ll take your questions.