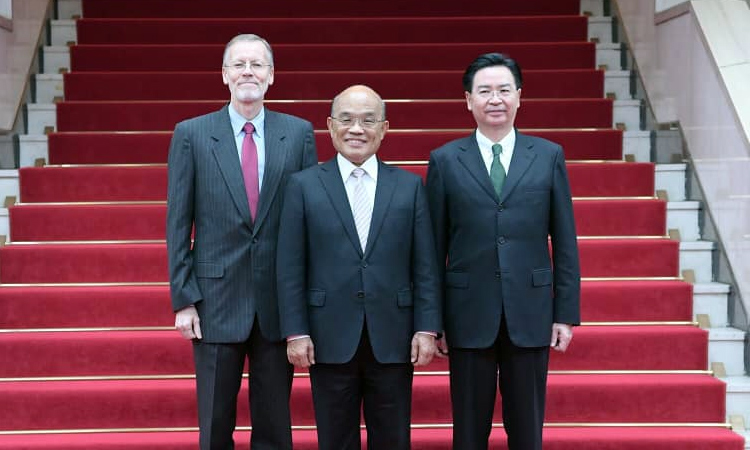 Let me begin by thanking Premier Su.  I look forward to a very productive meeting, and I am confident that strong cooperation between AIT and the Executive Yuan will continue under his leadership.  We work every day with all of the ministries and agencies under his purview and I want to thank the entire Taiwan civil service for its professionalism and openness. In particular, I would like to thank Foreign Minister Wu, who is an old friend and a longtime partner of AIT.

I would also like to take this opportunity to announce that AIT, in coordination with TECRO and MOFA, is launching a yearlong campaign called AIT@40.  This campaign will celebrate forty years of friendship and partnership between the United States and Taiwan since the signing of the Taiwan Relations Act.

To underscore the multi-faceted nature of our partnership, AIT@40 will highlight U.S.-Taiwan cooperation across twelve monthly themes, including Trade & Investment, Shared Values, and Education.  Our campaign will not only recognize past accomplishments, but will also look at ongoing and future efforts.  We believe this idea is exemplified by our motto “Strong Foundation, Bright Future.” [立穩根基，共創未來]

As many of you know, the U.S.-Taiwan friendship is personal for me.  This is my fourth time living in Taiwan and my third time serving here at AIT.  In those seven and a half years, I have witnessed incredible strides; strides in Taiwan’s political and economic development and strides in the breadth and depth of cooperation between the United States and Taiwan.

When Congress passed the Taiwan Relations Act nearly forty years ago, many viewed it as an experiment, hoping for the best but skeptical of what could truly be accomplished through unofficial ties alone.  Former Congresswoman Pat Shroeder, who was recently here to participate in a workshop on women’s political participation under the Global Cooperation and Training Framework (GCTF), said herself that she was cautiously optimistic when she voted for the TRA.  But she and Members of Congress from across the political spectrum are amazed at how the TRA has served as a foundation for the fulfillment of their greatest aspirations: a Taiwan that has combined the core features of liberal democracy with the best elements of its own cultural heritage; and a U.S.-Taiwan partnership that has flourished and benefitted people in Taiwan, the United States, and around the world.

Of course, we are not just celebrating the fortieth anniversary of the TRA’s signing.  We are also celebrating AIT’s 40th birthday.  AIT facilitates everything from trade missions and education exchanges to film screenings and defense cooperation.  AIT issues tens of thousands of visas every year to travelers from Taiwan who wish to visit the United States for tourism, business, and study, and has assisted Taiwan in entering the two flagship Trusted Traveler programs: the Visa Waiver Program and Global Entry.

But beyond the law and the institutions, it is the people-to-people ties that truly bind us.   Our mutual affinity is undeniable and our mutual affection immeasurable.

Since February is Science month, I want to take this opportunity to mention a few of the upcoming events.  Later this month, AIT will be pleased to host Dr. Jenna Jambeck, a professor and environmental engineer who will participate in the Southern Taiwan Youth Ocean Forum and meet with environmental experts and stakeholders across Taiwan.  At the end of this month, AIT will partner with the Ministry of Science and Technology, National Space Organization, Taipei City Government, Academia Sinica, and Chung Shan Institute of Science and Technology to launch the U.S.-Taiwan Space & Astronomy Exhibition at the Taipei Museum of Astronomy, highlighting U.S.-Taiwan collaboration.  AIT will also organize a film screening for local high school students of the Academy Award-nominated film Hidden Figures, which tells the true story of brilliant African-American women who overcame racial and gender barriers to make meaningful contributions to the success of the U.S. space program.

In addition to the variety of events corresponding with each of the monthly themes, I would also like to introduce some of the other elements of our yearlong AIT@40 campaign:

In honor of AIT@40, we have declared 2019 the U.S.-Taiwan Travel Year.  All year we will be holding events to promote two-way travel between the United States and Taiwan, in cooperation with the Taiwan Tourism Bureau.  As part of the U.S.-Taiwan Travel Year, the Discover America Committee and AIT are cohosting an online photo competition called “U.S.A. Through My Eyes,” offering prizes each quarter.

In addition, all year, the AIT@40 museum exhibition will be touring around the island.  Some of you may have already had the pleasure to visit this remarkable exhibition during its popular three-month stay at the National 228 Museum.  In November, it moved to the Kaohsiung History Museum, where it will run through April 2019.  In January, the exhibition also opened at Hinoki Village in Chiayi.

I am also pleased to announce that AIT will soon launch an Instagram account.  Throughout 2019, on AIT’s Facebook and Instagram, we will feature posts related to the AIT@40 monthly themes, posts highlighting key moments in U.S.-Taiwan history, and chances to win exciting prizes, so I encourage people to follow along with us.

I hope this provides a sense of just how committed we are to marking this important commemoration.

I would like to once again thank Premier Su, Foreign Minister Wu, our colleagues at TECRO, and of course the American and Taiwan people.  All of us are part of the U.S.-Taiwan story; a story of friendship, of progress, of partnership and of peace.  I am so humbled at the opportunity to help carry this relationship into its next phase, and begin work on our next forty years together.  Thank you.

2018年2月1日🎉AIT很高興向大家宣布「AIT@40」全年一系列推廣活動正式起跑！這一系列活動是為了慶祝美國和台灣自《台灣關係法》簽署以來40年的友誼和夥伴關係，同時我們也要歡慶美國在台協會的40歲生日。AIT處長酈英傑與行政院蘇貞昌院長和外交部吳釗燮部長在行政院會面，處長表達了對強健美台關係持續邁進的信心。處長表示：「我們雙邊的友好無庸置疑，我們雙邊的深厚情誼更是難以加以估量。」 為體現我們多面向的夥伴關係，AIT@40 將以每月一主題的方式，彰顯美台之間在各方面的合作，像是貿易與投資、共享價值和教育等主題。我們的活動不只回顧過往的成就，也將著眼進行中和未來的工作。我們相信最能充分展現此次活動精要的就是我們的主打口號：「立穩根基，共創未來」 。#AITat40Celebration #USTaiwanRelations #StrongFoundationBrightFuture #立穩根基共創未來 AIT is happy to announce the launch of a yearlong campaign called AIT@40, which celebrates the 40th anniversary and honors the 40 years of U.S.-Taiwan friendship since the signing of the Taiwan Relations Act in 1979. We are also celebrating AIT’s 40th birthday. AIT Director Brent Christensen met with Premier Su Tseng-chang and Foreign Minister Joseph Wu at the Executive Yuan and expressed his confidence in the continuation of robust U.S.-Taiwan relations. “Our mutual affinity is undeniable and our mutual affection immeasurable,” Director Christensen said. To highlight the many dimensions of U.S.-Taiwan cooperation, each month the AIT@40 campaign will explores a different facet of the relationship, with monthly themes such as Trade & Investment, Shared Values, and Education. Our campaign will not only recognize past accomplishments, but also look at ongoing and future efforts, as exemplified by our motto “Strong Foundation, Bright Future.”