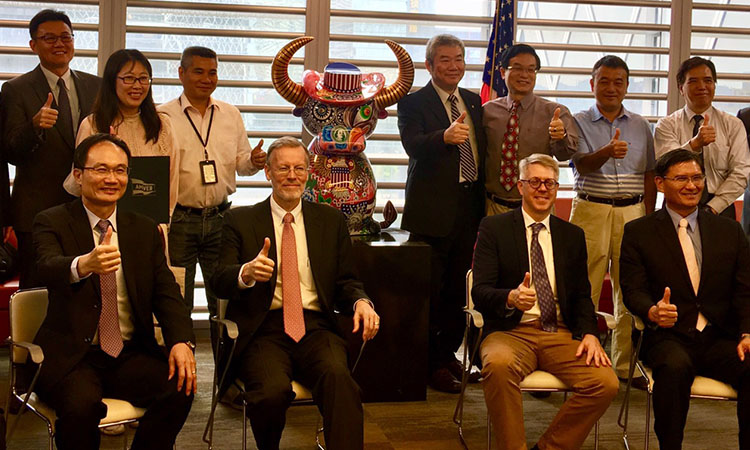 Ladies and gentlemen, shipmates, members of the media, wu ān!

Today, we are here to recognize the crews from 33 vessels, from 10 shipping companies, in Taiwan that participated in the United States Coast Guard-supported Amver program.  The program exemplifies the ongoing close U.S.-Taiwan cooperation in maritime security and safety, and highlights Taiwan’s important contributions to the global community.  I can think of no better emblem of how the United States and Taiwan consistently work together to make the world a safer and better place.

Amver originally stood for the “Atlantic Merchant Vessel Emergency Reporting” system, and it began operations in 1958.  But the idea for the Amver system began earlier, following the disaster of the RMS Titanic in 1912.  Ships passing within sight of the Titanic were unaware that it had hit an iceberg and was sinking. These ships saw the distress flares from the Titanic, but thought they were merely part of the maiden voyage celebrations!

The Amver program is an attempt to avoid this kind of tragedy at sea.  And the program is making great accomplishments.  Last year, there were 113 Amver cases worldwide, which led to 82 lives being saved.

Who are the award recipients among us today?  They are representatives of crews who have worked with the Amver system through the last year.  Some are earning their first Amver award.  Some are multiple time award winners, who have participated in Amver for 10, 20, even 30 years.  Whether it is a commercial ship saving stranded fishermen, a container ship saving a yachtsman, or a cruise ship saving migrants looking for a better life, Amver ships save, on average, one life a day.

To those companies or ships not enrolled in the Amver system, we ask that you look at the brave men and women represented here today, and we encourage you to join the ranks of those helping their fellow mariners.

Please join me in congratulating this year’s award recipients.

今天下午AIT處長酈英傑抵達高雄，參加美國海岸防衛隊「自動互助船舶救援系統」（AMVER）的頒獎典禮，並表揚參加此救援系統的33艘、來自10家台灣航運公司的船員。你知道參加AMVER系統的船隻在全球平均每一天就拯救一條人命嗎？謝謝台灣船員及船運公司讓公海更安全！ This afternoon, AIT Director Christensen arrived in Kaohsiung to present awards to 10 Taiwan shipping companies and their respective 33 vessels for participating in the U.S. Coast Guard’s Automated Mutual Assistance Vessel Rescue (AMVER) program. Did you know that ships participating in AMVER across the globe have saved an average of one life every 24 hours?  Kudos to the Taiwan crews and companies helping to make the high seas safer!