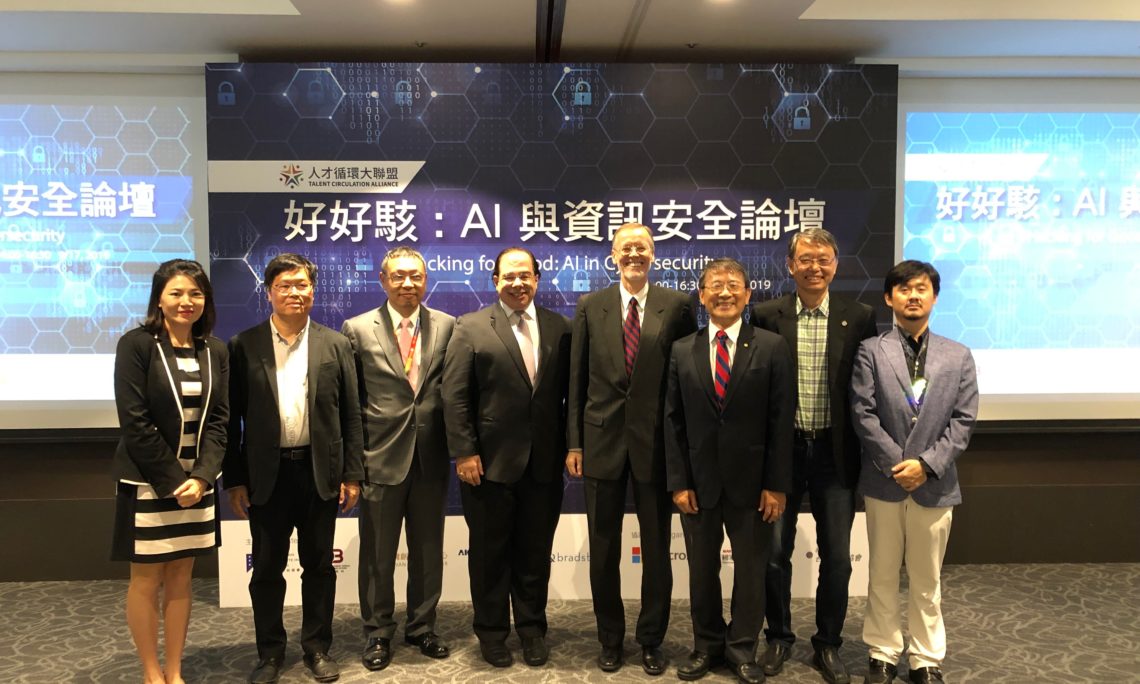 Before I begin, I would like to congratulate Taiwan for once again achieving second place at the DEFCON Capture the Flag hacking competition in Las Vegas this summer.  As many of you know, DEFCON is the most prestigious hacking competition in the world, and Taiwan’s repeated success at these international competitions is one of the main reasons why so many multinational technology firms are expanding their operations in Taiwan – they know Taiwan has, by a significant margin, some of the best technology talent of anywhere in the world.  We look forward to seeing what Taiwan is able to do for the upcoming NASA Hackathon, which Taiwan won globally in 2017.

Today’s event is taking place under the banner of our recently launched Talent Circulation Alliance, or TCA.  The TCA is a large-scale joint venture between the United States and Taiwan that aims to facilitate the circulation of talent between Taiwan and other like-minded partners around the world.

When it comes to talent exchange, distinguished figures such as Dun & Bradstreet’s Dr. Anthony Scriffignano represent the highest level we can aspire to.  Dr. Scriffignano is one of the United States’ foremost experts on artificial intelligence and advanced computing and was named the U.S. 2018 Chief Data Officer of the Year.  He is also a long-time friend of Taiwan, having travelled here several times before to build bridges with Taiwan’s leading AI and computing talent.  We are so proud to have him here for this event.

In today’s digital economy, societies must embrace life-long education and learning.  In this respect, today’s event is also part of our celebration of Education Month within our year-long AIT@40 campaign.

In particular, the theme of today’s event is Hacking for Good:  Using Artificial Intelligence for Cybersecurity.  I would like to say a few words about just how important this topic is, particularly in the context of cybersecurity threats to industry, our democratic institutions, and the future of our telecommunications networks.  The biggest threats today are not troops landing on the beach, but efforts by malign actors to use the openness of our societies and networks against us.

Let’s begin with disrupting the economy.  As we speak, pernicious actors, including China, are engaged in relentless attempts to steal Taiwan’s and the United States’ trade secrets, intellectual property, and most valuable data.  Evidence indicates Chinese-backed cyber attacks on Taiwan’s technology industry were seven times greater in 2018 than in 2017, and they are on track to be twenty times greater in 2019.  Historically, China has focused its attacks on Taiwan’s semiconductor industry, but it has now expanded its target list to include attacks on the smart machinery and electronic components industries.

China’s theft of Taiwan’s most valuable trade secrets is arguably an existential threat to Taiwan’s industry, and even its future.  The stakes are extremely high.

The second major challenge is protecting the integrity of our democratic institutions.  The core truth is there are those who seek to use the openness of the internet to sow division, create polarization, and even spread outright falsehoods.  The challenges associated with disinformation, misinformation, and foreign interference in democratic society are so difficult to address precisely because they call into question the inherent tensions that exist between the core democratic values  of freedom of speech and due process.  Balancing these competing values is a critical 21st century challenge.  As Russian attempts to interfere in the 2016 U.S. Presidential election and credible reports of foreign interference in Taiwan’s recent elections demonstrate, we are in a new era.

Malign actors believe that if they can make our societies more polarized and less able to distinguish fact from fiction, then people will begin to lose faith in democratic institutions.  Ensuring this does not happen is the collective responsibility of all stakeholders, including everyone in this room who has advanced computing skills.

The final area of concern is the integrity of our critical infrastructure, especially our information and telecommunications networks.  As everyone here knows well, the United States is particularly focused on the development of 5G network infrastructure.  5G is not just about telecommunications equipment and the software that powers it, but it is also the foundation for every transformational technology of the future, including autonomous vehicles, industrial robotics, artificial intelligence, and the internet of things.

The United States and our like-minded partners have grave concerns about the use of Chinese-made equipment, software, and services in telecommunications networks.  If China controls 5G infrastructure, it can secure unique access to data that flows on these networks, and even the ability to potentially shut down the internet of other countries should they so choose.  Taiwan has been aware of these risks for many years, and banned Chinese-made telecommunications equipment from its infrastructure more than five years ago.  It is only now that the rest of the world is beginning to follow Taiwan’s wise example.

The United States is doing what it can to help deepen cyber cooperation with Taiwan.  We have been working closely with the Taiwan authorities, under the leadership of Senior Advisor D.T. Lee, to help bring Taiwan into the Department of Homeland Security’s Automated Indicator Sharing system, which shares cyber threat indicators at machine speed.  We are also working with Taiwan to raise public awareness through the global Stop.Think.Connect campaign.  We have held trainings on improving public-private sector cooperation, and earlier this year we co-hosted officials from more than twenty countries to discuss network security and emerging technologies, such as 5G.

In November, for the first time, we will co-host with Taiwan the Cyber Offensive and Defensive Exercises, bringing together approximately 15 countries to address cyber threats from North Korea, social engineering, critical infrastructure vulnerabilities, and financial crimes.  In the future, we hope to work closely with Taiwan on developing its International Cybersecurity Center of Excellence, with a focus on capacity building in the Pacific Islands and establishing democratically inspired global cyber standards for 5G technologies.

When the United States talks about our vision for a Free and Open Indo-Pacific, that includes freedom of industries to develop in the absence of predatory behavior from external actors; when we talk about freedom from coercion, that coercion includes the looming threat of cyber attacks on our industry and infrastructure.

But government to government cooperation is not enough to achieve this vision.  If Taiwan, and indeed the world, are to respond effectively to the cyber threats to our industry, democracy, and telecommunications infrastructure, it will require everyone to come together – the public sector, the private sector, NGOs, the hacking community, and the general public.  A so-called “whole of government” approach is no longer sufficient, we need a “whole of society” approach to cyber threats.  The truth is, the future of free societies depends upon all of you in this room – those who actually have the skills and expertise to address these threats.

Cyber defense and hacking for good are no longer optional, they are foundational for the future of free societies.  I implore all of you to dedicate yourself to this mission.  It is no exaggeration to say the world as we know it depends upon all of you doing so.

「今天我們面對的最大威脅，已不再是搶灘的部隊，而是惡意行為者企圖用我們社會及網路的開放性來對付我們。」 「網路防禦以及為良善而「駭」，已不再是選項，它們是未來自由社會的必要基礎。」 美國在台協會處長酈英傑先生今天於「好好駭：人工智慧與資安講座」上致詞。美國的人工智慧及先進運算專家，鄧白氏公司的安東尼‧斯克里芬諾博士（Anthony Scriffignano）也出席活動。網路威脅對台灣產業、民主及基礎建設所造成的影響嚴重而真實，反制網路威脅對我們所有人來說，都是重要的任務。處長致詞全文請見: https://www.ait.org.tw/zhtw/remarks-by-ait-director-w-brent-christensen-at-hacking-for-good-ai-cybersecurity-zh/ “The biggest threats today are not troops landing on the beach, but efforts by malign actors to use the openness of our societies and networks against us.” “Cyber defense and hacking for good are no longer optional, they are foundational for the future of free societies.” AIT Director Christensen gave remarks today at the Hacking for Good: AI & Cybersecurity Conference with renowned U.S. Cybersecurity Guru Dun & Bradstreet’s Dr. Anthony Scriffignano. The cyber threats to Taiwan’s industry, democracy, and infrastructure are serious and real. Countering cyber threats is the task of us all. Read full remarks: https://www.ait.org.tw/remarks-by-ait-director-w-brent-christensen-at-hacking-for-good-ai-cybersecurity/